This issue featured the second appearance of the original Green Lantern, Alan Scott, as a guest star in the comic book headlined by his “successor”, Hal Jordan.  Alan’s first guest shot had occurred less than a year previously, in Green Lantern #40’s “The Secret Origin of the Guardians” — a tale that eventually turned out to be one of the most consequential stories DC ever published, at least in terms of fictional universe-building (or, more accurately, multiverse-building).  Although this second team-up of the two Lanterns, “Prince Peril’s Power Play”, was produced by the same creative team of writer John Broome, penciller Gil Kane, and inker Sid Greene, it wasn’t destined to achieve the same fame as the first one; still, it had (and has) several special things going for it.  One of these was a second, different “guest appearance”, of a wholly different sort from Alan Scott’s, which we’ll get around to discussing a little later.  Another was a greatly expanded role for a supporting character who’d only appeared briefly in GL #40 — Alan Scott’s chauffeur and sidekick, Charles “Doiby” Dickles. 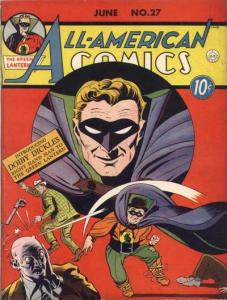 and then gone on to show up regularly in Green Lantern stories throughout most of the hero’s original run, making his last “Golden Age” appearance in 1949.  A comic figure, short and rotund and habitually wearing a derby hat (hence his Brooklynese moniker), Doiby was part of the long, proud tradition of humorous sidekicks to dashing, square-jawed heroes.  Beyond his comical accent and humorous antics, however, Doiby could also be an effective ally to his pal “Lantrin”, frequently putting the kibosh on hoodlums with his trusty wrench.

In GL #45, Doiby gets involved (very involved, in fact) with the lovely Princess Ramia of the planet Myrg in “Galaxy 882”, who has fled her homeworld to avoid a forced marriage to the odious Prince Peril.  Scouring the universe for a suitable replacement groom, and apparently finding the pickings in her own galaxy pretty darn slim, she homes in on a radio signal being beamed into space from Earth-Two.  Making landfall near the source of the signal, the princess immediately encounters our Mr. Dickles — who, awestruck by her beauty, can make her no higher compliment than to compare her to his beloved antique taxicab:

Doiby valiantly attempts to defend the “princeress” but is no match for the strapping villain; however, Ramia manages to send out a mental distress call to Alan Scott, who quickly responds as Green Lantern.  Alan and Peril immediately throw down, power ring beam against sword-fire force bolts, as depicted by Kane in what must have been the most creatively composed single panel my eight-year-old self had yet seen, way back in April, 1966:

Prince Peril manages to temporarily disable Alan’s ring, and then fells him with a sword-blast.  Doiby and Ramia are forced to flee in Doiby’s precious Goitrude; luckily, Raima has brought along a handy gadget called a dimension-changer, with which she neatly shifts the cab to the next dimension over — Earth-One, of course.  This allows Doiby to use his special emergency flare gun to summon yet another Green Lantern to come to their aid — our own Hal Jordan.

Now it’s Hal’s turn to battle Prince Peril, when the persistent would-be groom makes the dimensional jump in pursuit of his prey.  Unfortunately, it’s been almost 24 hours since Hal charged his ring, but before he completely runs out of juice, he manages to disintegrate Peril’s sword — thus allowing Kane to render the remainder of the fight in the mode of the dynamic, all-out hand-to-hand combat he seems to have relished drawing at least as much as (and probably more than) anything else:

Despite Hal’s pugilistic prowess, he’s ultimately no match for Peril’s superior size and strength, and is at last overcome just like his Earth-Two counterpart before him.  Peril grabs Ramia and drags both her and Doiby back to Myrg, where he forces Doiby to become his court jester — the fiend!.  Things are looking pretty bad for the good guys as our story enters its final chapter.  But wait — who’s this guy who’s just shown up on page 20?

This was hardly the first time in comics history that an artist had drawn himself into a story, of course, but in 1966, it was definitely the first time I’d ever seen it.    In some ways, of course, Kane’s fourth-wall-breaking appearance here was just an extension of the style of comics writing in which an unseen narrator routinely addresses the story’s readership via its captions — a very common narrative style in the mid-Sixties.  Still, I’m sure the artist’s self-depiction had an impact on my eight-year-old self’s developing perception of comics creators as real, individual people.  And in 1966, even learning the names of a comic book story’s creators wasn’t a sure thing, with the inclusion of creator credits being a hit-and-miss proposition at virtually every publisher (with the notable exception of Marvel), making this sequence even more of a standout.

(Here’s an interesting thing, though:  It’s been my understanding that virtually all of DC’s comics in the Sixties were produced using the “full script” method — meaning the writer provided the complete dialogue, captions, and descriptions of the action going on in each panel before the artist ever set pencil to page.  If that’s so, it seems a little strange that John Broome would write an appearance of Gil Kane into this story, and not also include himself, the other primary storyteller.  Did Kane ask Broome to add this element?  Or did Kane actually have more input into the overall development of the story than the traditional understanding of “full script” implies?  If anyone reading this has any additional information, or even just an opinion, please feel free to sound off in the comments.)

Once Hal and Alan have both recovered from their initial encounters with Prince Peril, they follow the radiation trail left by his spaceship all the way back to Myrg, intent on rescuing Doiby and the princess.  This time, with both Lanterns wielding fully-charged rings, things don’t go so well for the villain of our tale: 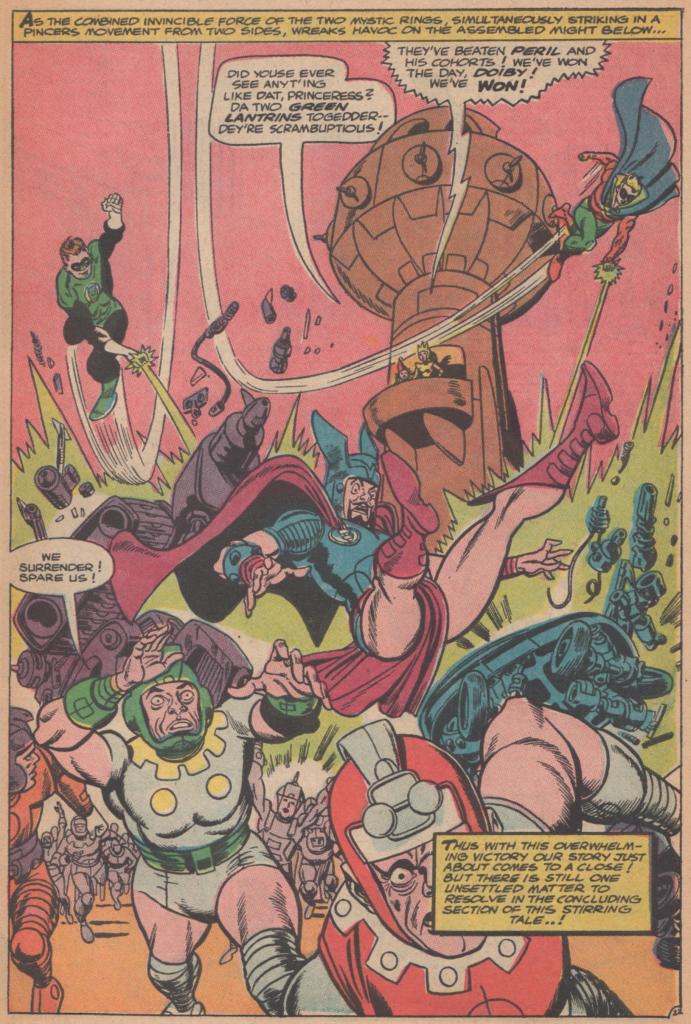 (I’m pretty sure that this was the first full-page panel I’d encountered in a comic book outside of a story-opening splash page.  Whether Gil Kane had greater-than-usual input into the story in this issue or not, I think it’s pretty evident that he had a ball illustrating it.)

As the caption says, there’s still one unsettled matter to be resolved in the story’s epilogue:  Princess Ramia still has to marry someone — so whom will it be?  Gil pops up again to explain that it’ll be neither Alan nor Hal (reasonable enough, since neither of them has even so much as spoken to her during the preceding scenes), and then he takes us the rest of the way home:

Yep, it’s Doiby Dickles, who trades in his derby for a crown and his beloved cab for a real live princess, and thereby makes a lasting contribution to the unrealistic expectations of short, round men everywhere.

The story ends with an assurance that Doiby and Ramia “lived happily ever after”, and that pretty much seems to have been the case — although, as you might expect with their being comic book characters, their married life would not prove completely uneventful.  In fact, they’d show up less than a year later, in the next Hal – Alan team-up, Green Lantern #52’s “Our Mastermind, the Car!” — a tale that found Goitrude the taxicab inexplicably gaining sentience and turning to a life of crime.  (Don’t worry, folks — it turned out she’d been possessed by the intelligence of the renegade Green Lantern, Sinestro, and all was eventually put right.)  After that, the Myrgian royal couple didn’t make another appearance until 1985’s Infinity Inc. Annual #1, where they were guests at Alan Scott’s much-belated wedding (by that time, the original “Lantrin” had to have been in his late 60’s, at 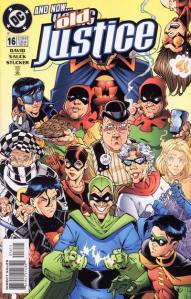 least).  Doiby then went back into supporting-character limbo until 2000, when he resurfaced in the pages of Young Justice #16 as a member of “Old Justice”, a group of Golden Age sidekicks concerned over the unsupervised activities of teenage superheroes.  That appearance eventually led into a multi-issue storyline in which the Young Justice team helped Doiby free the planet Myrg (and Ramia) from a conqueror named Prince Marieb, and then helped fend off another group of alien invaders, the Slag, by defeating them in a baseball game played on a Myrgian replica of Brooklyn’s legendary Ebbets Field.

That light-hearted but poignant adventure would be the last we’d see to date of Doiby and Ramia, whose ultimate happy ending in the pre-Flashpoint DC Universe may have to be assumed.  The characters wouldn’t seem to have a place in the current “New 52” continuity, which has been pretty much scoured of its Golden Age history.  On the other hand, it’s a big multiverse out there, and DC is gearing up for yet another retooling of its continuity in this summer’s “Rebirth” event — so who knows?  We may yet return to planet Myrg for another glimpse into the fortunes of Mr. Charles Dickles of Brooklyn and his “Princeress” Ramia.  And wouldn’t that be scrambuptious?