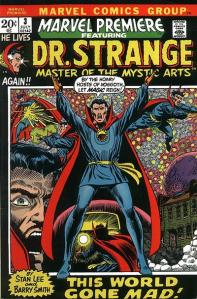 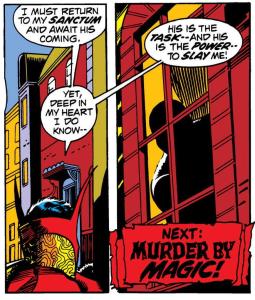 Back in April, we took a look at Marvel Premiere #3, which relaunched Doctor Strange as an ongoing solo feature following a 32-month absence.  That comic, featuring a script by the Master of the Mystic Arts’ original writer, Stan Lee, and art by rising young star Barry Windsor-Smith, inaugurated a story arc centered on a mysterious new menace — someone as yet both unseen and unnamed, but powerful enough to compel the service of Nightmare, one of Dr. Strange’s mightiest foes.  The issue ended with the sorcerous superhero returning home to his Sanctum Sanctorum following his defeat of Nightmare, unaware that a silhouetted stranger waited there for him.

Two months later, Marvel Premiere #4 picked up exactly where the previous episode left off — but with a significantly changed creative team.  In his 2009 introduction to Marvel Masterworks — Doctor Strange, Vol. 4, Marvel’s then new editor-and-chief (and once and future Dr. Strange scripter) Roy Thomas provided this explanation:  END_OF_DOCUMENT_TOKEN_TO_BE_REPLACED

Back in September, I wrote about buying and reading my first issue of Sub-Mariner, #20, a mostly done-in-one tale (in keeping with Marvel’s new “no continued stories” policy) which nevertheless ended on an inconclusive note — though Namor, Prince of Atlantis, had escaped the clutches of Doctor Doom, he was still a fugitive in New York City, hunted by the U.S. military as well as by the municipal police, and unable to escape to the ocean depths due to having had his gills surgically closed by a forgettable villain from outer space called (checks notes) the Stalker.  I ended the post by asking the question: would my twelve-year-old self be invested enough in Namor’s plight to come back for issue #21?  On the face of it, it seemed a dubious prospect, as I was becoming somewhat less interested in comics in general around this time.  After all, if I was on the verge of dropping titles I’d been buying regularly for a year or more, including Avengers and Daredevil, what sense would it make for me to start getting involved with yet another series?  END_OF_DOCUMENT_TOKEN_TO_BE_REPLACED