Gil Kane’s cover for Conan the Barbarian #23 is a fine piece of work.  Nothing to complain about here.  I mean, it’s Gil Kane, right?

That said, I’ve always regretted that the story it illustrates, “The Shadow of the Vulture!”, wasn’t published under the cover that Barry Windsor-Smith had originally drawn for it…  END_OF_DOCUMENT_TOKEN_TO_BE_REPLACED

As noted in last month’s post about Conan the Barbarian #20, at the time that issue went to press, the series had recently received the 1971 Shazam Award for Best Continuing Feature — a fact writer-editor Roy Thomas was understandably happy to publicize in the comic’s letters column.  But for anyone who’d missed the good news, they got a second chance to learn about it one month later, when Marvel trumpeted the accolade on the cover of Conan #21.  (Considering that Marvel’s rival DC Comics had done the same thing a year earlier when their own Green Lantern won the same award, it was hardly a surprise that Marvel would follow suit.)

That the blurb ended up appearing on the cover of this particular issue of Conan, however, would turn out to be somewhat ironic, as a number of the people involved in producing it would in later years view it as something of a train wreck.  As Roy Thomas put it in his 2018 book Barbarian Life: A Literary Biography of Conan the Barbarian, Volume 1:
END_OF_DOCUMENT_TOKEN_TO_BE_REPLACED

As we discussed on the blog last month, the 19th issue of Conan the Barbarian saw not only the beginning of the title’s most ambitious multi-issue storyline to date, but also the return of artist Barry Windsor-Smith after a hiatus of several months.  That return was marked by a noticeable improvement in the artist’s already impressive skills in the time he’d been away; but it was also marred somewhat by deadline problems that resulted in only the first nine pages of the story being fully inked (by Dan Adkins), the remaining eleven having to be reproduced from Windsor-Smith’s pencils; an intriguing, but not altogether successful experiment, given the limits of comic-book printing technology of the time.  END_OF_DOCUMENT_TOKEN_TO_BE_REPLACED

With this issue of Marvel Comics’ Conan the Barbarian, writer-editor Roy Thomas and artist Barry Windsor-Smith inaugurated the first proper extended storyline to appear in the title since its inception.  A note on the letters page cited the single Conan novel written by the hero’s creator Robert E. Howard, “The Hour of the Dragon” (published in book form as Conan the Conqueror), as a model for the two storytellers; nearly half a century later, in his 2018 book Barbarian Life: A Literary Biography of Conan the Barbarian, Volume 1, Thomas would also invoke Homer’s epic poem, the Iliad, as an inspiration.  Both works scan as legitimate antecedents for the multi-issue chronicle of what would soon come to be referred to as the Hyrkanian War, or the War of the Tarim; still, I think its fair to say that of the two, the Iliad bears closer resemblance to the story that Thomas and his collaborators would unfold to Conan‘s readership over the next seven months, at least in its setting and overarching premise.  Both epics tell of the siege of a great city by an equally great army; of a bloody war in which neither side may be said to be entirely in the right.  END_OF_DOCUMENT_TOKEN_TO_BE_REPLACED

In our February blog post about Marvel Comics’ Conan the Barbarian #15, we covered how that issue’s final story page — a full-page splash panel of Conan bidding the wizard Zukala farewell, signed by its artist, Barry Windsor-Smith — also served as the artist’s farewell to the series’ readers, as #15 was the last issue he would draw of the title.

Or, at least, it was supposed to be.  END_OF_DOCUMENT_TOKEN_TO_BE_REPLACED

As this post goes out on April 30, 2022, we’re a little less than a week away from the premiere of the second multi-million dollar motion picture from Marvel Studios starring Doctor Strange, Master of the Mystic Arts.

But fifty years ago, in the last week of April, 1972, Marvel Comics was just hoping that maybe the good Doctor might be able to sustain his own solo comic book series again, his last such having been canceled in 1969.  Although they were hedging their bets a little by bringing him back not in his own title — not yet, anyway — but in the tryout book Marvel Premiere.  END_OF_DOCUMENT_TOKEN_TO_BE_REPLACED

Any of you out there who aren’t already familiar with this particular comic book may be taking a look at its John Buscema-Joe Sinnott cover right now and thinking, “Nice, but what’s so special about Ka-Zar rasslin’ a big alligator, even underwater, that Astonishing Tales #12 should rate its own blog post?”  The fact of the matter, however, is that this issue (along with its immediate follow-up, Astonishing Tales #13) represents a significant chapter in the histories of not one, but two, semi-major Marvel Comics characters — neither one of whom happens to be the self-styled Lord of the Savage Land.  END_OF_DOCUMENT_TOKEN_TO_BE_REPLACED

Regular readers of this blog may recall my mentioning my religious upbringing on a few earlier occasions.  But for those who don’t know, or have forgotten, I was raised Southern Baptist.  My parents were very devout — they’d actually first met at the church we all later attended as a family — and I was inculcated in church doctrine pretty much from birth.  The very earliest stories that I consumed were Bible stories.

So you’d expect that the not-especially-subtle Christian allegory at the core of Roy Thomas and Gil Kane’s “Warlock” must have been glaringly obvious to me back in November, 1971, when at age fourteen I first read the comic that’s the subject of today’s blog post.  Maybe I was offended, and maybe not, but surely I at least got it, right?  END_OF_DOCUMENT_TOKEN_TO_BE_REPLACED

As regular readers will recall, we’ve begun the last two Marvel-focused posts on this blog with excerpts from the Bulletin Bulletins page that ran in the company’s comics published in July, 1971 — and we see no reason to break that run with this installment.  Especially since the very next Bulletin following those we’ve already shared is specifically about the subject of today’s post.

Coming after a Roy Thomas editorial and “ITEM!” that dealt with Lee’s decision to take a brief sabbatical from comics writing (and what that meant for the series he usually scripted, such as Amazing Spider-Man) — and directly preceded by another item announcing the move of several Marvel titles (including Conan the Barbarian) to a larger, 25-cent format — this Bulletin caught the attention of readers (well, this particular fourteen-year-old reader, at any rate) with a graphic by Gene Colan and Tom Palmer from Doctor Strange #180, featuring that book’s titular star — a hero who, in the wake of the cancellation of his series with issue #183, had been conspicuous by his absence from the Marvel Universe ever since a late-1969 guest appearance in Incredible Hulk which had effectively retired the character:  END_OF_DOCUMENT_TOKEN_TO_BE_REPLACED

Conan the Barbarian #8 was the third consecutive issue of the Marvel Comics series that I bought, and the fourth overall.  But it was the first one that had the map.

By “the map“, I am of course referring to this work of imaginative cartography, familiar to virtually everyone who read Marvel’s Conan comics even occasionally back in the day: 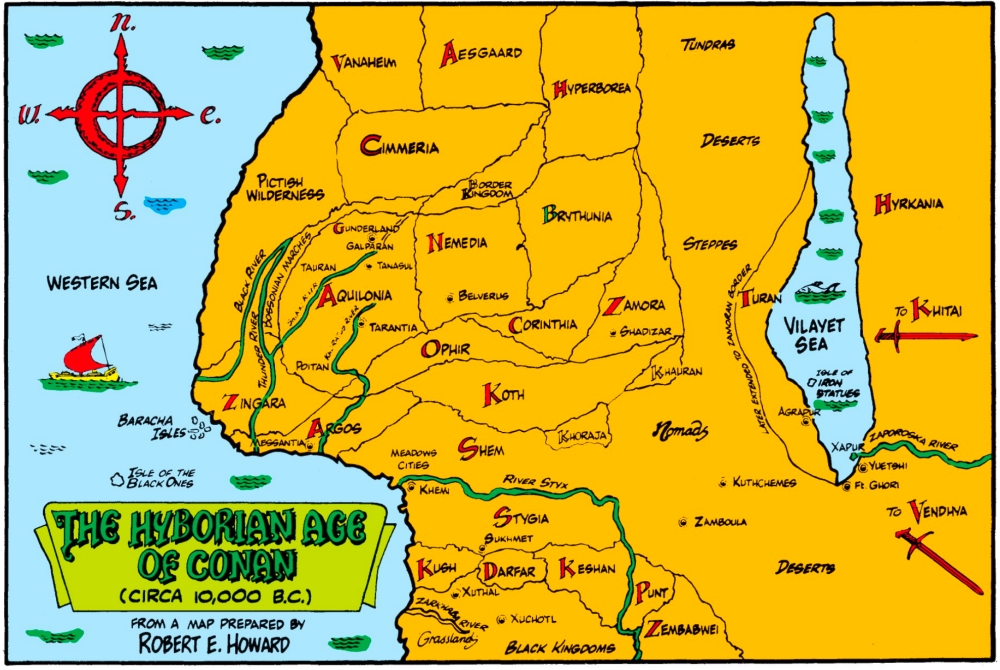