In the summer of 1970, when I was finding my way back into the regular habit of comic-book buying after almost giving the whole thing up a few months earlier, I seem to have been inclined to give just about any and every title a shot.  At least, that’s my best guess as to why I picked up this issue of Teen Titans — a title I’d only ever read once before, and that over two years previously.

If I had to come up with a more specific reason, however, it would have been the cover — which, in addition to being a typically fine effort by the series’ long-time semi-regular artist, Nick Cardy (pretty much at the peak of his powers in this era), promised that the issue’s story would feature an extra couple of superheroes in addition to the usual gang of Justice Leaguers’ junior partners I was used to; namely, the Hawk and the Dove.  END_OF_DOCUMENT_TOKEN_TO_BE_REPLACED

Fifty years ago, whenever I picked up an issue of one of DC Comics’ “mystery” (i.e., Comics Code-approved horror) anthology titles, I knew I would see work from multiple creators.  Any given issue would feature a mix of talents, most likely including some that I’d been a fan of for quite a while, others who were somewhat less well-known to me (but whom I was becoming more familiar with all the time, due mostly to their frequent appearances in these very titles), and probably at least one or two I’d never heard of before.

This was definitely the case with the comic that’s the subject of today’s post, House of Mystery #188, which started things off with another spooky cover by the very familiar (and always dependable) Neal Adams, and then launched into a story drawn by an artist whose work was altogether new to me (and probably new to most of this issue’s other original readers, as well), though I wouldn’t know this for sure until I got to the credits box on the story’s second page:  END_OF_DOCUMENT_TOKEN_TO_BE_REPLACED

On July 21, 2015, this blog made its debut with a post entitled “It was the summer of ’65…”.  In that first installment, I described my earliest experiences with comic books, leading up to to my very first comics purchase in the, well, summer of ’65.  Since then, I’ve been writing about some of the most interesting individual issues I bought in my first few years as an avid comics reader (and nascent collector), while also attempting to chronicle, more generally, the evolution of my own comics tastes and interests, and setting that personal narrative in the broader context of what was going on in the funnybook industry (and, more broadly, in American culture), during those years.

But now, almost half a decade after starting this project, I’ve reached the point in the narrative of my comic book buying and reading where that story almost came to an end, fifty years ago.  I’ve arrived at the time in my life when, at least for a while, I stopped buying comics.  END_OF_DOCUMENT_TOKEN_TO_BE_REPLACED

Justice League of America was my first favorite comic book.  As I’ve written about here before, it was the first series I subscribed to through the mail (my first USPS-delivered issue being #44, in 1966), and even after my sub ran out, I managed to score every new issue when it hit the spinner racks — up until issue #69, that is, which I either missed or intentionally passed on (the former seems a bit more likely, but who knows).  A couple of months later, I missed (or skipped) #72 as well; and then, after #74, I apparently more-or-less dropped the book.  In any case, I didn’t buy another issue of JLA until the one I’m writing about today, which arrived on stands in January, 1970.  By this time, as regular readers of the blog know, I had entered a period in which comic books in general held less appeal for me, and I was buying hardly anything at all.  So what could have grabbed me about Justice League of America #79 so much that I felt compelled to pick the book up?  END_OF_DOCUMENT_TOKEN_TO_BE_REPLACED 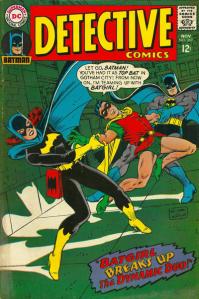 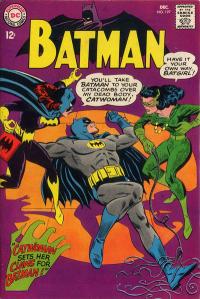 If you’re a regular reader of this blog, you might have noticed that it’s been a while since I’ve written here about either Detective Comics or Batman.  The last issue of the former title to receive the “Attack of the 50 Year Old Comic Books” spotlight was issue #369 (Nov., 1967), while the most recent issue of the latter to rate a post was #197 (Dec., 1967).  Not counting the hero’s appearances in issues of Justice League of America, World’s Finest Comics, and (most significantly) The Brave and the Bold that I have posted about, this blog has been a Batman-free zone for more than two years.  That’s quite a contrast to the first two years of this enterprise, during which time the blog covered comics published from mid-1965 to mid-1967, and Batman and Detective accounted for nine posts between them.  END_OF_DOCUMENT_TOKEN_TO_BE_REPLACED

The second half of 1969’s iteration of DC Comics’ annual summer event teaming the Justice League of America with their Golden Age predecessors, the Justice Society of America, sported a cover that was — for this particular twelve-year-old’s money — considerably more exciting than the previous issue‘s.  That cover had featured a row of JSAers looking on passively while some nameless kid ripped up a lamppost; this one, pencilled and inked by Neal Adams, heralded the first meeting between the Superman of Earth-One (the one currently appearing in multiple DC titles every month) and the Superman of Earth-Two (the one who’d ushered in the whole Golden Age of Comics in the first place in 1938’s Action Comics #1) — and from the looks of things, it was going to be a, shall we say, rather contentious meeting.  That I would buy this comic book was never in question; but I have a hard time imagining anyone who was even a casual reader of DC superhero comics seeing this book in the spinner rack in July, 1969, and not picking it up.  END_OF_DOCUMENT_TOKEN_TO_BE_REPLACED

As regular readers of this blog may recall, I started picking up the Roy Thomas-Neal Adams-Tom Palmer run of X-Men with the second issue, #57, in which the book’s new creative team began their “Sentinels” storyline.  I managed to score the next issue as well, and so was on hand for the debut of Alex Summers’ costumed identity, Havok — but then, the following month, I missed issue #59,  and thus didn’t get to read the end of that storyline.  END_OF_DOCUMENT_TOKEN_TO_BE_REPLACED

When last we left Aquaman, the King of the Seven Seas had just been reunited with his long-lost Queen, Mera, and the two were swimming swiftly back to Atlantis to confront Narkran — the man whom Aquaman had trusted to rule Atlantis in his stead while he searched for the kidnapped Mera, and whom he’d since learned had actually been conspiring all along with surface-world gangsters to take and hold Mera prisoner.  Both King and Queen were unaware, however, of three other critical situations that were unfolding at the same time: the first (and most urgent) being the solitary battle of Aquaman’s junior partner Aqualad against a fearsome sea monster called the Bugala; the second, a burgeoning popular movement of rebellion against Narkran’s despotism by a band of young Atlanteans; and the third, an ongoing series of tremors that were rocking the undersea kingdom’s foundations.  END_OF_DOCUMENT_TOKEN_TO_BE_REPLACED

Throughout my fifty-four years of reading comic books, it’s hard for me to think of another cover that was as much of a pleasant surprise on first sight than Neal Adams’ cover for The Brave and the Bold #85.  This goateed, grimacing tough guy, aiming an arrow out in the general direction of the viewer that didn’t look the least bit “tricky”, but rather looked quite deadly — this was Green Arrow?

The thing is, I actually already liked Green Arrow.  Not that he was one of my very favorite characters, or anything like that; in fact, I’m fairly certain I’d never even read a solo tale featuring DC Comics’ Emerald Archer at this point, though that may have been mainly because I’d never

really had the chance.  (GA had lost his regular backup slot in World’s Finest in early 1964, a full year-and-a-half before I began buying comics; and though there’d been a few of his tales reprinted here and there since then, I’d missed them.)  But I enjoyed seeing him in Justice League of America, perhaps at least in part because of his underdog status.  While I generally favored JLA tales that focused on the team’s heavy hitters — Superman, Batman, etc. — I also appreciated those stories that allowed the “lesser” heroes their time in the spotlight, the way that Justice League of America #57 did for Green Arrow.  I didn’t even mind all that much when the storytellers (writer Gardner Fox and artists Mike Sekowsky and Sid Greene, in this case) subjected the Battling Bowman to such silliness as the scene below, where GA, facing four armed criminals, takes the time to set up a trick shot because… it’s just more fun, I guess? END_OF_DOCUMENT_TOKEN_TO_BE_REPLACED

As I’ve written in several previous posts, I was something of a wuss as a kid, at least when it came to my choices in entertainment.  (Oh, who do I think I’m kidding?  I was an all-around, all-purpose wuss.)  To put it plainly, I was scared of being scared.

So I pretty much eschewed all forms of scary media: horror movies, eerie TV shows, spooky comic books… you get the idea.*  That is, until a friend took me gently by the hand (metaphorically speaking) and showed me that a walk through the cemetery at midnight could actually be kind of fun.  END_OF_DOCUMENT_TOKEN_TO_BE_REPLACED