As regular readers of this blog may recall, I started picking up the Roy Thomas-Neal Adams-Tom Palmer run of X-Men with the second issue, #57, in which the book’s new creative team began their “Sentinels” storyline.  I managed to score the next issue as well, and so was on hand for the debut of Alex Summers’ costumed identity, Havok — but then, the following month, I missed issue #59,  and thus didn’t get to read the end of that storyline.  END_OF_DOCUMENT_TOKEN_TO_BE_REPLACED

I feel pretty confident in making the statement that Neal Adams’ cover for X-Men #58, featuring the debut of Scott “Cyclops” Summers’ younger brother Alex in the costumed hero identity of Havok, is one of the most iconic of the late Silver Age at Marvel Comics.  But apparently, not everyone associated with that cover was, or is, completely happy with how it turned out — at least, not in the published version.

According to a 1999 article for the comics history magazine Alter Ego by the issue’s scripter (who was also Marvel’s associate editor at the time), Roy Thomas:

…Neal turned in a real beauty for X-Men #58, with a color-held overlay of Havok as the focal point.  Alas, Neal’s suggested color scheme wasn’t followed.  Instead of the blue that would have been the closest equivalent of the black in his costume inside, it was decided (by whom I dunno, but it wasn’t me, babe) that the Havok figure should be color-held in orange and yellow.  Bad idea.

Well, maybe.  I gotta say, though, that that orange-and-yellow has always worked for me. I mean, those colors really popped against the cover’s dark blue-gray background; and besides, blue ain’t black, after all.  Too bad we don’t have a “blue” version to compare the published version with… wait, what did you say?  We do, kind of?  Courtesy of the cover to the trade paperback edition of Marvel Masterworks – The X-Men, Vol. 6, featuring Adams’ art newly recolored by Richard Isanove?  Oh, okay then.  END_OF_DOCUMENT_TOKEN_TO_BE_REPLACED

I first made the acquaintance of Marvel Comics’ X-Men in April, 1968 — one year prior to the publication of the subject of today’s post. — when they made a guest appearance in Avengers #53.  That particular issue turned out to be the last chapter of a crossover story that had begun in the mutant team’s own book; and even though I now knew how everything would turn out, I was still curious enough about the characters and situations to go back

and pick up the 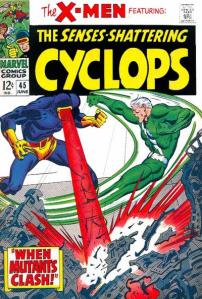 preceding chapter in that same month’s issue of X-Men (and even to buy the issue before that, when the opportunity presented itself).  But though I enjoyed those two comics well enough, I wasn’t taken enough with either of them to keep following the series.  As I wrote in my X-Men #45 post last year, that may have been partly due to the somewhat atypical circumstances surrounding the book at the time I sampled it.  Marvel had then just recently decided to start downplaying the team concept in the series’ cover designs, in favor of spotlighting the individual members (or, in a few cases, major story events); a decision that was soon mirrored in the stories themselves, as the team actually broke up in the issue immediately following the Avengers crossover, #46.  In addition, I was almost certainly influenced in my decision to pass on X-Men (at least for the time being), by my lack of enthusiasm for the competent but underwhelming art that then filled the title’s pages, by the likes of Don Heck and Werner Roth.

Apparently, I wasn’t alone in my general attitude of indifference to Marvel’s Merry Mutants, as, by virtually all accounts, the title was the publisher’s worst selling at the time — if not yet right on the edge of cancellation, then still uncomfortably close to it.  Which is why, when Neal Adams — the hottest young artist at Marvel’s main competitor, DC Comics — came to Marvel expressing an interest in doing some work for them, and editor-in-chief Stan Lee gave him his choice of assignments… Adams chose to work on X-Men.  END_OF_DOCUMENT_TOKEN_TO_BE_REPLACED

Last week I blogged about Avengers #53, a classic comic book featuring the titular super-team in battle with a second band of costumed heroes whom I hadn’t previously encountered as of April, 1968 — namely, the X-Men.  That issue was actually the concluding chapter of a story that was continued from X-Men #45, making it the first comics crossover I ever experienced*.  Unfortunately, I didn’t realize that the Avengers book was the second part of the crossover until after I’d already bought it and brought it home.  That didn’t stop me from going ahead and reading the book — but as soon as I got the chance, I headed back to the convenience store to see if I could score a copy of the first part.  Even though I already knew how the story ended, obviously, I still wanted to know how the heroes of both groups got themselves into the situation in which they found themselves at the beginning of Avengers #53 in the first place.  END_OF_DOCUMENT_TOKEN_TO_BE_REPLACED

The first Marvel comic book I ever bought was Avengers #45, back in August, 1967, but even though I enjoyed that issue, I wouldn’t get around to trying another Avengers comic for another eight months.  By April, 1968, however, I’d begun buying both Amazing Spider-Man and Daredevil regularly, and I was ready to expand my Marvel-reading horizons a little further.  Avengers was already a known quantity, obviously, and issue #53 clearly had something else going for it, as well — the appearance of a whole other super-group, the X-Men.

I’m honestly not 100% certain that I even knew whether the X-Men were supposed to be heroes or villains at this point, though it seems likely I would have noticed their book on the stands at some point.  Assuming I did know that the X-Men were good guys, that would have been another strong selling point, as my younger self appears to have loved the idea of getting double the heroes (in this case, two hero teams) for the price of one — as attested to by the fact that in my first couple of years of comic book consumption, the only title I bought almost as regularly as Justice League of America was The Brave and the Bold, (which, of course, featured DC’s heroes teaming up with one another).  And the fact that the cover heralded a “vs.” situation wouldn’t have thrown me, either — even as a mostly-DC reader up to 1968, I knew that heroes fought each other sometimes.  After all, I was the proud owner of JLA #56, which featured what’s probably the first instance of the battle-lines-of-heroes-charging-each-other motif that informs Avengers #53’s cover (as it would many another cover through the years).  END_OF_DOCUMENT_TOKEN_TO_BE_REPLACED