As I related on this blog back at the top of the month, in the summer of 1971 my young teenage self finally dared to dip a toe into the waters of the (allegedly) more mature comic book content represented by the black-and-white output of Warren Publishing.  But as daunted as I might have been by the prospect of encountering more gore and violence than my tender sensibilities were at that time accustomed to within the pages of Warren’s Eerie or Creepy, I’m certain that I experienced even greater trepidation regarding my decision as to whether or not I should purchase the magazine that’s the primary topic of today’s post.  Because, in addition to the same more generous amounts of violence and gore offered by its fellow Warren publications, Vampirella also appeared to promise a more substantial serving of sex.  END_OF_DOCUMENT_TOKEN_TO_BE_REPLACED 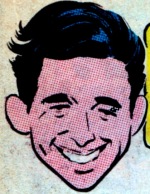 Portrait of Dick Giordano by Joe Orlando, published in many of Giordano’s inaugural DC letters columns in1968.

In October, 1970, Dick Giordano had been an editor at DC Comics for roughly two and a half years.  Since moving over from a similar position at the smaller Charlton Comics, Giordano had made his mark on such DC titles as Beware the Creeper, The Hawk and the Dove, Aquaman, and Teen Titans — all of which featured work by creators he’d previously employed at Charlton, including Steve Ditko, Denny O’Neil, Jim Aparo, and Steve Skeates.  He had also served in the vanguard of a new cohort of DC editors who, like himself, had worked as comics artists before ascending into editorial positions.  This was an innovation driven largely by Carmine Infantino, himself a veteran freelance artist who had recently moved into an executive role at DC; Giordano, however, had been hired not by Infantino, who in early 1968 was still “only” DC’s Art Director, but rather by Executive Vice President Irwin Donenfeld.  Very soon after Giordano’s arrival, Donenfeld was ousted from the company, with Infantino being promoted to Editorial Director — a change which made him Giordano’s new boss.  And although Giordano highly respected Infantino as an artist, he soon found it difficult — and ultimately, impossible — to work with him within their new roles.  END_OF_DOCUMENT_TOKEN_TO_BE_REPLACED

As I’ve written in several previous posts, I was something of a wuss as a kid, at least when it came to my choices in entertainment.  (Oh, who do I think I’m kidding?  I was an all-around, all-purpose wuss.)  To put it plainly, I was scared of being scared.

So I pretty much eschewed all forms of scary media: horror movies, eerie TV shows, spooky comic books… you get the idea.*  That is, until a friend took me gently by the hand (metaphorically speaking) and showed me that a walk through the cemetery at midnight could actually be kind of fun.  END_OF_DOCUMENT_TOKEN_TO_BE_REPLACED

As I’ve mentioned n a number of previous posts, my young comics-reading self of a half century or more ago had rather conservative tastes.  All these years later, that’s my best explanation for why and how I missed out on virtually all the new DC comic book titles that came out in the years 1967 and 1968, in what comics historians Gerard Jones and Will Jacobs would later call “The DC Experiment”.  This sudden onrush of new series, most but not all of which launched with try-outs in DC’s Showcase title, roughly coincided with the ascent of former freelance artist Carmine Infantino to an executive role at the publisher.  The push was an effort on Infantino’s part to recover market share DC had lost to the ascendancy of upstart rival Marvel on one hand, and the ebbing of “Batmania”-fueled sales on the other, by coming up with something new — preferably, a lot of somethings.  END_OF_DOCUMENT_TOKEN_TO_BE_REPLACED 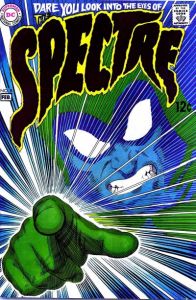 As of January, 1969, The Spectre was one of only two DC Comics titles I was still buying regularly (the other one was Justice League of America) — or maybe I should say I was trying to buy them regularly.  Somehow, I managed to miss Spectre #8 on the stands — and since the book only came out bi-monthly, that meant that I hadn’t spent any real quality time with the Ghostly Guardian since the previous September.  Normally, that wouldn’t be a problem in terms of picking up where I’d left off, storywise (though it was always irksome to miss an issue, of course), because Spectre — like most other DC titles of this era — had very little in the way of issue-to-issue continuity.  That wasn’t entirely the case with this issue, however, as we’ll see in a bit.  END_OF_DOCUMENT_TOKEN_TO_BE_REPLACED

“Batmania” may have dominated the pop culture landscape in 1966, but it was by no means the only thing going on at the time — not even within the smaller sphere of pop-cultural activity that was of special interest to nine-year-old boys such as myself.  For one thing, there was also The Man from U.N.C.L.E.

The Man from U.N.C.L.E. (that’s the United Network Command for Law and Enforcement, for those of you who don’t already know, and yet might actually care for some reason), in addition to being something of a mini-phenomenon of its own, was of course also part of the larger wave of popularity of the “super-spy” genre in the early-to-mid-Sixties.  The wellspring of this popularity was author Ian Fleming’s James Bond, the hero of a series of espionage thrillers who’d debuted in 1953, but who’d really taken off (especially in the United States), when it was revealed that President John F. Kennedy was a fan.  By 1966, the enormous success of Agent 007 had yielded a crop of imitators as well as variations on the “spy-fi” concept, including TV’s spoof Get Smart and Western-spy-fi genre hybrid The Wild Wild West, not to mention comics’ Nick Fury, Agent of S.H.I.E.L.D. and T.H.U.N.D.E.R. Agents series.     END_OF_DOCUMENT_TOKEN_TO_BE_REPLACED