If you read my post about Vampirella #18 back in June, you may recall that I promised at that time that I would eventually let you know how things ultimately turned out for Count Dracula, who’d begun a quest for redemption that was just getting started when that issue’s installment of the magazine’s titular lead feature reached its end.  Well, faithful readers, the time has come at last.  But please be advised that in order to do so properly, I’m first going to need to fill you in on the key events of the storyline’s chapters from Vampirella #19 and #20, so that what transpires in issue #21’s “Slitherers of the Sand!” will land, dramatically speaking, in the way its creators intended.  Also, as it turns out, this issue doesn’t really fully resolve the Dracula arc either, so we’re also going to be taking a quick look at some later appearances of the Count in Eerie and Vampirella, just so we can say we’ve wrapped things up properly.

Oh, and of course we’ll also be covering the other three stories published in Vampirella #21 — the ones that don’t have anything to do with the lead feature or with Dracula.  After all, I wouldn’t want to shortchange you on that material, would I?  END_OF_DOCUMENT_TOKEN_TO_BE_REPLACED

Last November, we discussed Phantom Stranger #17, the fourth outing on the title for writer Len Wein. In that issue, Wein and his collaborator, artist Jim Aparo, showed us a more human side of the mysterious titular hero than we’d seen previously, largely through the introduction of a potential romantic interest.  But the Phantom Stranger bid farewell to that interest — a beautiful blind psychic named Cassandra Craft — at the end of #17; and the potential for more characterization-rich storytelling (and perhaps even a touch of issue-to-issue continuity) that Ms. Craft’s advent had seemed to signify wasn’t followed up on in the next couple of issues, both of which featured standalone adventures in which the Stranger operated as solitarily as he had before. END_OF_DOCUMENT_TOKEN_TO_BE_REPLACED 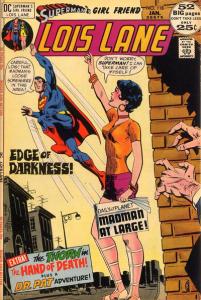 Regular readers of this blog will recall how, over the past year, we’ve been tracking the Fourth World-adjacent story material that appeared in various “Superman” family titles — mostly in Superman’s Girl Friend Lois Lane — during the period that Jack Kirby was writing, drawing, and editing Superman’s Pal Jimmy Olsen.  The most significant piece of this material was that having to do with Morgan Edge, the head of Galaxy Broadcasting (and thus the boss of Lois and Jimmy, as well as of Superman’s alter ego Clark Kent).  Originally created by Kirby, Edge was introduced in his first Fourth World comic, Jimmy Olsen #133, as being secretly involved with the criminal organization Intergang — and thereby, as shown in the very next issue, also an operative of the dark lord of Apokolips, Darkseid.  More recently, however, it had been revealed in Lois Lane #118 that the Morgan Edge we readers had been reading about in all the Superman books wasn’t the real Edge at all — rather, he was an evil clone who’d been created by Darkseid’s minions in the Evil Factory to pose as the media mogul.  END_OF_DOCUMENT_TOKEN_TO_BE_REPLACED

In March, 1972, the format change that DC Comics editor Joe Orlando had brought to the company’s House of Mystery title at the beginning of his tenure had been in place for four years.  This format — which emulated the approach of the horror anthology comics of the early 1950s to the extent possible under the strictures of the Comics Code Authority — had proven very successful, leading to similar revamps of other DC titles (House of Secrets and Tales of the Unexpected) as well as the launch of brand new titles cut from the same rotting gravecloth (Witching Hour and Ghosts).  Even DC’s arch-rival Marvel had been moved to try its hand at the “mystery” anthology comics game (though so far without much success).

Through it all, House of Mystery had kept to the course charted by Orlando in 1968, centered on a mix of short stories of supernatural horror (generally featuring twist endings), interspersed with a page or two of macabre cartoons, all “hosted” by Cain the Caretaker.  To the extent that anything had changed in the last four years, it was largely in the makeup of the talent roster that produced the title’s content.  Even so, it was still possible to pick up an issue and be completely surprised — as was the case with the very comic we’re looking at today.  END_OF_DOCUMENT_TOKEN_TO_BE_REPLACED

Last summer I wrote a couple of blog posts detailing how I first started buying and reading Warren Publishing’s black-and-white magazine-sized horror comics, beginning with the 1972 Eerie and Vampirella Annuals and the 36th “regular” issue of Eerie, all of which came out in July, 1971.  As I noted at the time, I was fated never to become a consistent, regular reader of Warren’s titles, their ultimately serving as but an occasional snack within my overall comic-book diet during the next ten years.  Having said that, I’m still a little surprised that after getting off to such a strong start, it ended up taking me a whole seven months to get around to buying my fourth Warren.  Possibly I was anxious about getting in trouble should my parents catch me with such “mature” reading material (which did happen, in fact, on at least one occasion).  Assuming that was indeed the case, however (and even if it wasn’t), what was it that finally compelled me to go ahead and buy this issue of Eerie, after passing on the last three?  I can’t claim to actually remember for sure, but I feel pretty confident that, as with so many other impulse purchases I’ve made over the more than half a century I’ve been buying comic books, I was sold by the cover.   END_OF_DOCUMENT_TOKEN_TO_BE_REPLACED

A half century ago, when your humble blogger picked the object of today’s post up out of the spinner rack and eyeballed the cover for the first time, I was awfully curious as to who — or what — that wraithlike, red-tinged figure descending into Aquaman’s body might turn out to be.  At the same time, I wasn’t the least bit curious about the identity of the cover’s artist — since, with the exception of the usual left-hand column’s worth of floating JLA heads rendered by Murphy Anderson, the cover was the obvious work of Neal Adams.  And as Adams had either pencilled, inked or provided complete art for more Justice League of America covers than any other artist in the three years since his very first (for issue #66 [Nov., 1968] ), that was no surprise at all.

But interior art by Adams in an issue of JLA?  That was unexpected; nevertheless, on turning past the cover to the book’s opening splash, that’s exactly what my fourteen-year-old self beheld:  END_OF_DOCUMENT_TOKEN_TO_BE_REPLACED

The 1972 Eerie Annual (and no, I don’t know why publisher James Warren stuck “1972” on a periodical published in July, 1971, though my guess is that he hoped that at least a few inattentive retailers might leave the item on the stands for a full eighteen months) was almost certainly the very first comics magazine from Warren Publishing that your humble blogger, then fourteen years of age, ever bought.

But it wasn’t the first Warren magazine I’d ever bought.  And it may not even have been my first Warren comic book, either — at least, not if you define the latter term as “a book full of comics”.

As discussed on this blog back in January, Teen Titans #32 ended with two of our young heroes, Kid Flash and Mal, trapped in a bizarre alternate reality following their inadvertently causing the death of a young caveman during a time-trip to the Stone Age.  Having been coerced by this quasi-medieval world’s version of their adult mentor Mr. Jupiter — here a wizard called Jupiterius — into being tested to prove themselves worthy of his assistance, the final page of the story found Kid Flash attempting to match or best “Trueshot” — this world’s Speedy — in an archery contest:  END_OF_DOCUMENT_TOKEN_TO_BE_REPLACED

Back in December, I wrote about the departure of Dick Giordano from his position as an editor at DC Comics.  Giordano’s last day on staff at the publisher appears to have been November 4, 1970 — but, since the processes involved in producing periodical comic books don’t stop (or start) on a dime, the fruits of his stewardship would continue to appear in the titles he’d supervised for another few months, even after he was no longer the editor of record.  The same principle had of course applied at the beginning of his tenure at DC; and thus, just as Giordano’s first issue of Teen Titans (#15, May-Jun., 1968) had featured a story almost certainly procured by his predecessor, George Kashdan, the first issue edited by his successor, Murray Boltinoff, would present a tale that had actually been written and drawn under Giordano’s direction.

Well, mostly written and drawn under Giordano’s direction.  While the story in Teen Titans #32 is solely credited to writer Steve Skeates and artist Nick Cardy, its actual provenance is… rather more complicated. END_OF_DOCUMENT_TOKEN_TO_BE_REPLACED

In the summer of 1970, when I was finding my way back into the regular habit of comic-book buying after almost giving the whole thing up a few months earlier, I seem to have been inclined to give just about any and every title a shot.  At least, that’s my best guess as to why I picked up this issue of Teen Titans — a title I’d only ever read once before, and that over two years previously.

If I had to come up with a more specific reason, however, it would have been the cover — which, in addition to being a typically fine effort by the series’ long-time semi-regular artist, Nick Cardy (pretty much at the peak of his powers in this era), promised that the issue’s story would feature an extra couple of superheroes in addition to the usual gang of Justice Leaguers’ junior partners I was used to; namely, the Hawk and the Dove.  END_OF_DOCUMENT_TOKEN_TO_BE_REPLACED