The cover of Mister Miracle #2, with its plethora of blurbs, follows in the tradition of the second issues of Jack Kirby’s Fourth World titles which preceded it.  Even more than the covers of Forever People #2 and New Gods #2, however, this one’s not just wordy, it’s shouty.  To my contemporary, 63-year-old sensibilities, it’s too much, at least by half.

But back in March, 1971, my thirteen-year-old self seems to have seen things differently.  That’s my prevailing theory, anyway, when I consider the fact that, unlike virtually any other comics purchases I made in the general timeframe of fifty years ago, I can remember the particular circumstances of my acquiring Mister Miracle #2.  While I don’t recall actually picking the book up out of the spinner rack at the Forest Ave. Tote-Sum in Jackson, MS, or paying for it at the counter, I do have a specific recollection of gazing upon that gloriously over-the-top cover as I held the comic in the front seat of my mom’s car, our having stopped at the aforementioned convenience store (at my request, I’m certain) on the way home from school.

Of course, Kirby’s striking image of the titular hero about to be perforated by three very sharp-looking blades probably played a part in arresting my attention, as well as all that breathless copy.  Still, I believe it was the primarily the outpouring of new concepts and characters — Follower, Aero-Discs, Overlord, Granny Goodness, X-Pit — most of which were presented in the form of short, barked questions, that ultimately made this cover so memorable.  Those questions may well have fused with those that I had already formulated after reading the series’ first issue — who was this mysterious young “super escape artist” named Scott Free? and what did his relatively mundane dust-ups with human gangsters have to do with the war between the space-gods of New Genesis and Apokolips? — that gave me a sense of “Electric Tension” (also promised by the cover), which would only be resolved by my getting home and tearing right into the story.

Kirby opens his tale on what appears to be a relatively quiet scene featuring Scott and his friend and assistant, Oberon — or maybe not so quiet, since we’re seeing it from the perspective of Overlord — who, though unknown to us readers as yet, may be safely deemed to be some sort of mechanized being, on the evidence of his ticker tape-like “dialogue” and the intersecting pieces of Kirbytech that form the panel borders, among other things.  But whoever or whatever Overlord is, they obviously have lethal intentions towards our friend Scott.

We never get any details about the “factory people” responsible for filling Scott’s order, but it’s a pretty good bet that the DC Universe has at least a few industrial outfits who can fabricate one-off pieces of eyebrow-raisingly high technology to order — and will do so without asking a lot of questions.  Somebody has to build all that gear for Batman, right? 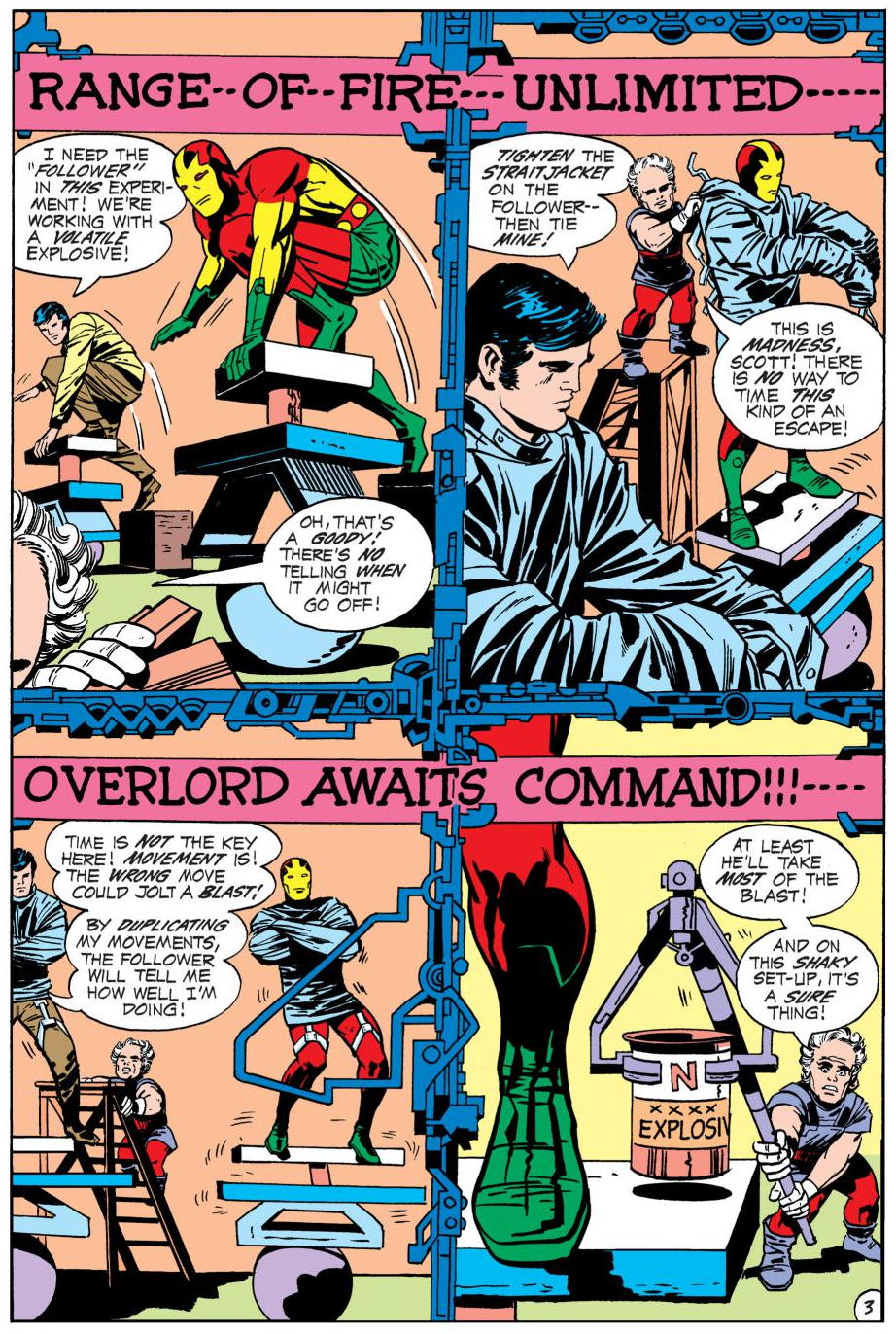 It appears that we were correct in assuming Overlord to be some kind of mechanical, robotic construct.  And a really big one, at that — or, at least that’s the impression we’re likely to take away from the way the thing fills up this full-page splash panel.

With page 5, we’ve finally arrived at the title and creator credits for this issue’s adventure.  As usual, it’s an all-Kirby production, with the exception of Vince Colletta on inks. 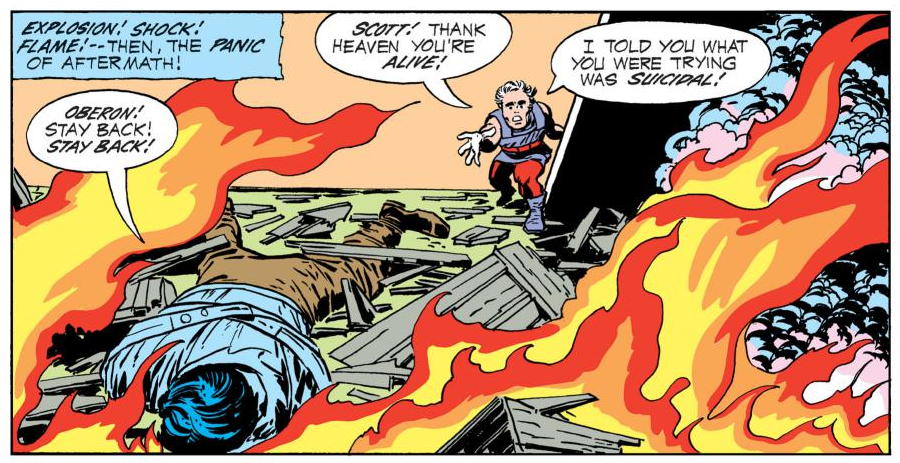 It’s not entirely clear what’s just happened — it looks like Overlord has fired a focused beam of some sort of energy blast right at Scott and his “Follower” (through a window, I guess?).  But, as will be confirmed via dialogue a little further on, the “volatile explosive” seen on page 3 (from the “N” on the can, I think it’s safe to assume it was nitroglycerine) has gone off as well.

In any event, the fire quickly spreads.  Oberon goes to work with a fire extinguisher, but  as the smoke rises, he quickly loses sight of the still straitjacketed Scott.  But no worries — when he finally reaches his friend, he find the young man uninjured, as well as free of his restraints: 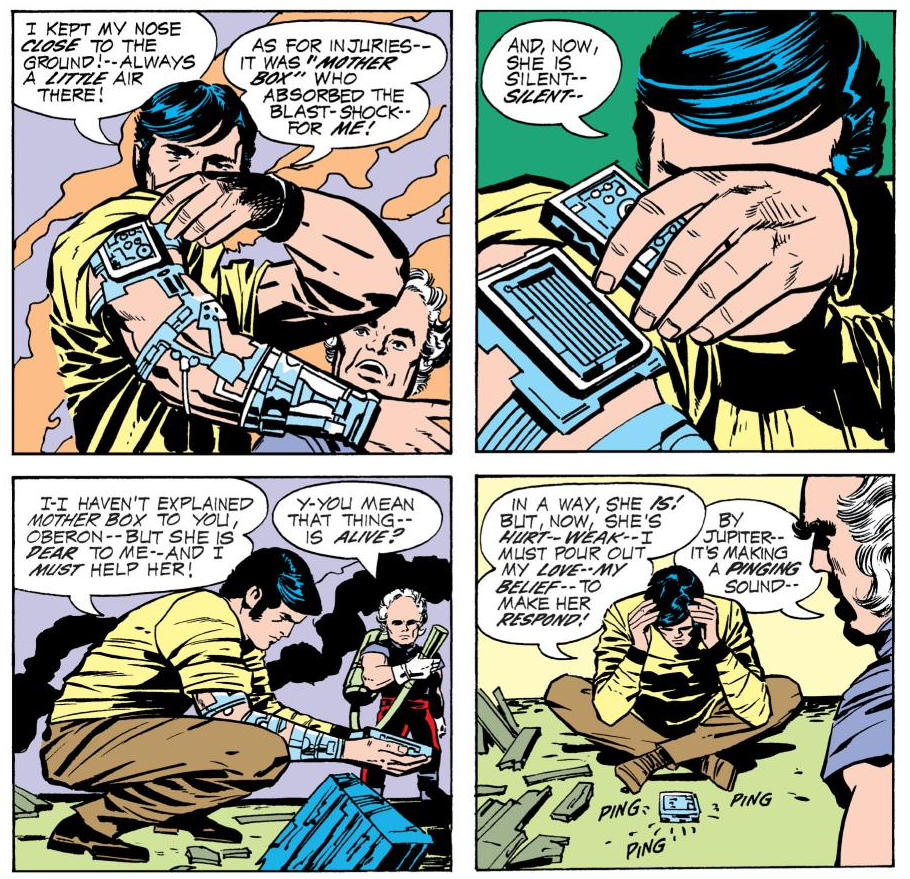 We first saw Scott’s Mother Box in Mister Miracle #1, but it wasn’t named then — and, as I explained in my post about that issue back in January, my younger self wasn’t sharp enough at the time to have connected this device’s distinctive “pings” with those made by the Forever People’s bigger, redder model.  So, this sequence — which made that identification explicit — was probably when I realized that Scott almost certainly had to be from either New Genesis or Apokolips. 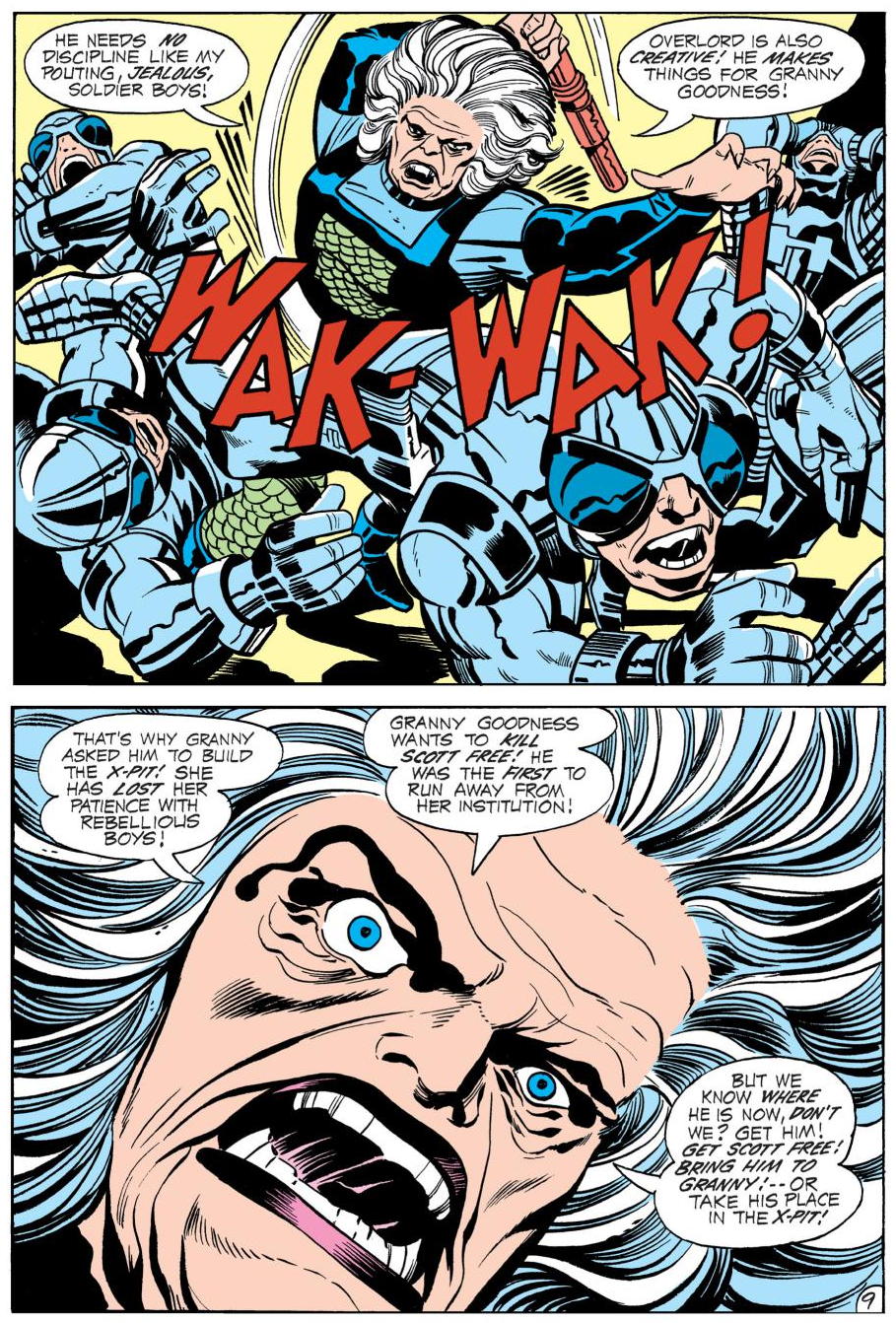 According to Wikipedia (and other online sources, as well), Kirby based the appearance of the most important female villain he created for his Fourth World mythos, Granny Goodness, on the late stand-up comic Phyllis Diller.  Kirby’s biographer (and former assistant) Mark Evanier doesn’t buy that idea, however; and I’m inclined to agree with him.

At this point, we still haven’t seen any character utter the word “Apokolips” — but, if you were taking bets on the location of Granny’s orphanage, which we now know to be Scott’s point of origin, well…

Page 10 gives us the issue’s cover scene… sort of.  Scott’s not in costume, and since it’s a practice session, its framing on the cover as a bona fide death trap seems just a little bit of a cheat. 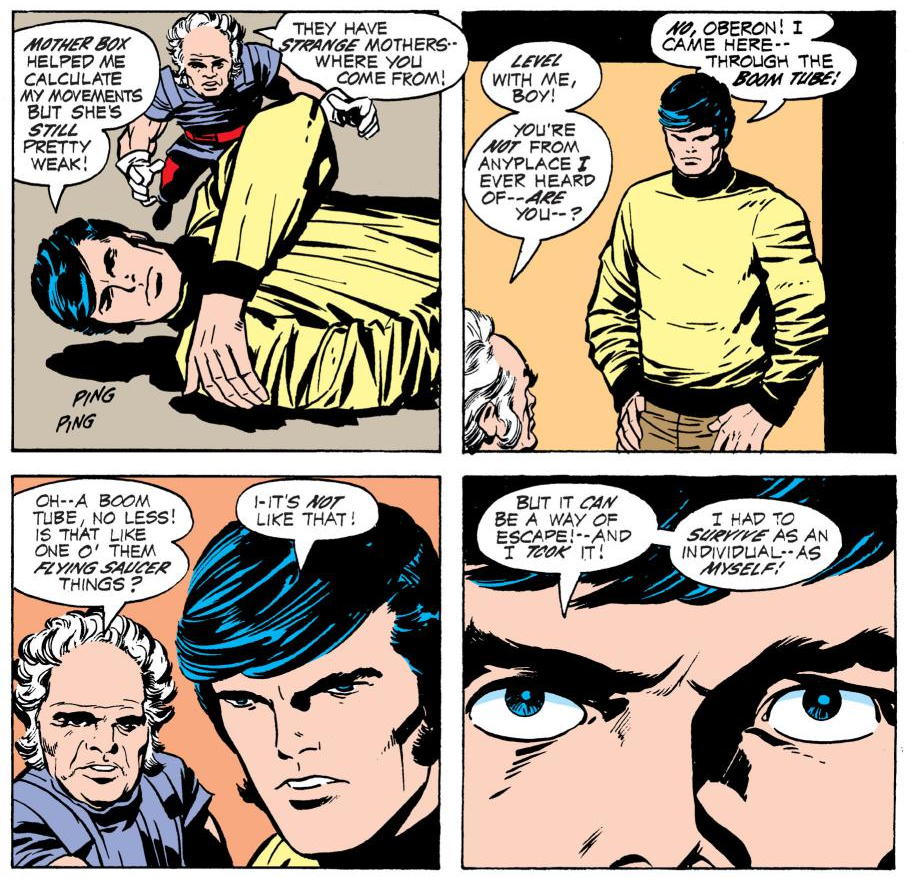 This is the first mention in Mister Miracle of the Boom Tube, one of the defining concepts of the Fourth World.  Readers like me who were following all of Kirby’s DC titles had first seen the technology used in Forever People #1, in which the young heroes of that series traveled though it from New Genesis to Earth.  Since then, we’d learned that the Boom Tube was the primary mode of transportation to our world for the denizens of Apokolips, as well as for those of its sister god-planet.

Leaving the testing shed to go put on his costume, Scott doesn’t see the Follower return to “life” (how isn’t explained, but one might suppose that the automaton, though damaged in the blast, wasn’t damaged quite to the inoperable point our hero has assumed).  Nor does he bear witness as a small band of Granny Goodness’ “soldier boys”, believing the Follower to be Mister Miracle himself, burst into the shed, subdue both the Follower and Oberon with stun-gun blasts, and take them prisoner. 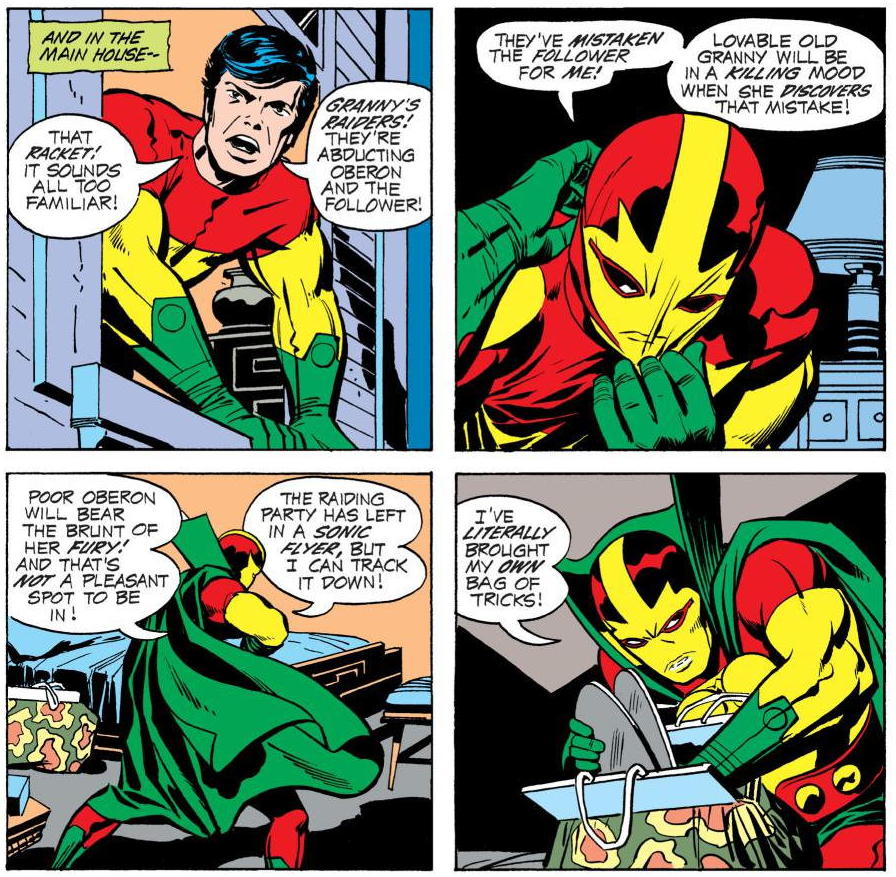 We first saw Scott’s “bag of tricks” the first time we saw him, on the opening splash page of Mister Miracle #1.  Later in that issue, our hero had described the bag and his contents as his “inheritance” — “Things left with a foundling by parties unknown!”

Mister Miracle had flown in the previous issue (though off-panel), using “air jets” that were somehow attached to or built into his costume at the belly region.  Going forward, however, he’d rely on the much more visually appealing, and way cooler, Aero-Discs.

If any reader still has doubts at this point as to just where Granny Goodness and her pointed-helmet brigade — and, by implication, her “institution’s” one and only escapee, Scott Free — all hail from, the honored bust of “great Darkseid” should eliminate them handily.

Mister Miracle swoops down, retrieves the unconscious Oberon, and heads for the exits — but he’s immediately stymied by Granny, who orders her “pet”, Overlord, to open the X-Pit: 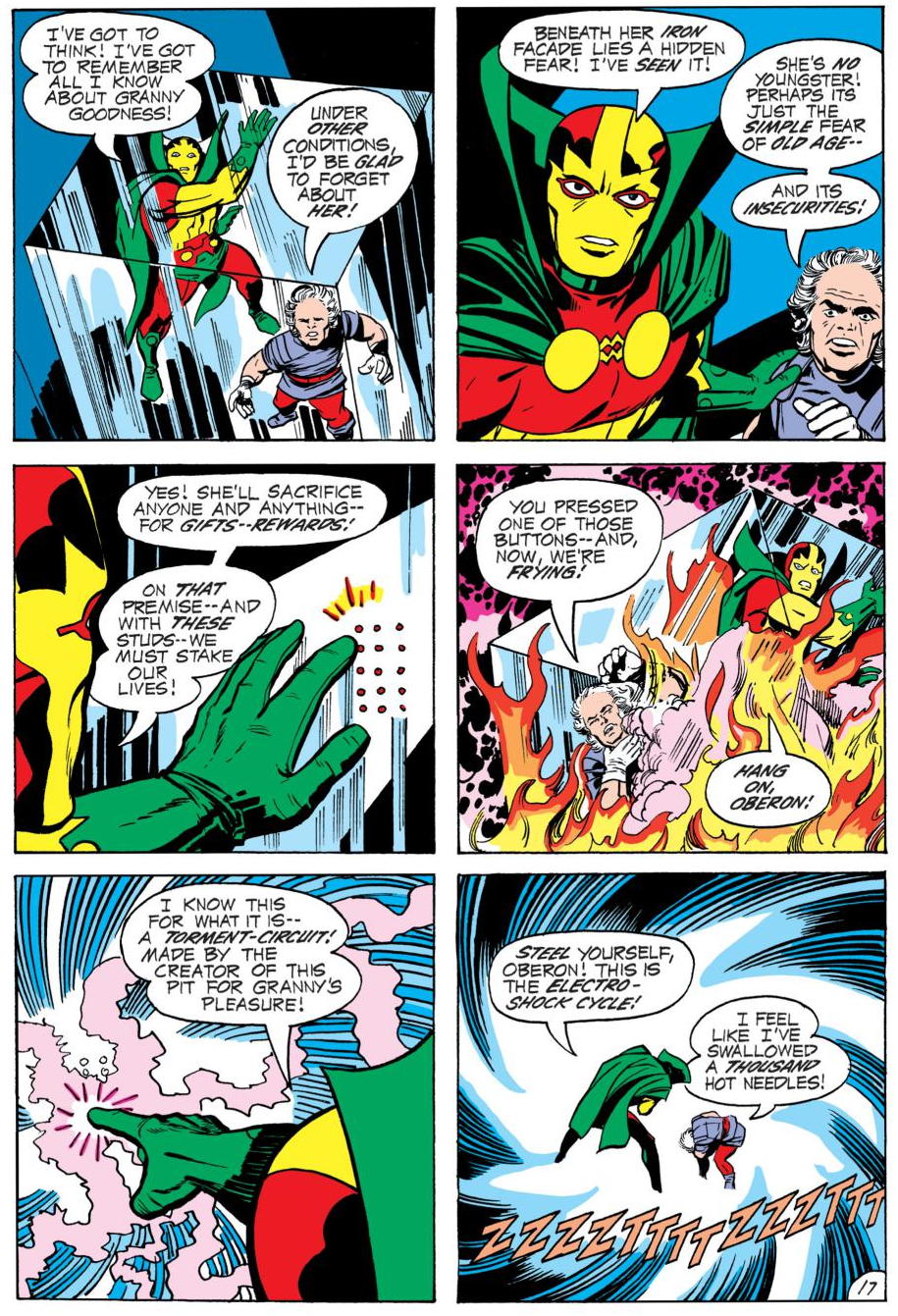 Why has Overlord provided cycle-control “studs” for the X-Pit cage inside the cage itself?  Beats me.  But, hey, they’re there, and so Mister Miracle keeps punching through.  The “electro-shock cycle” is followed by, well, mud:

Meanwhile, Granny enjoys the fawning solicitude of one of her soldier boys.  Kirby doesn’t highlight the idea, but we can’t help but be aware that, had he not managed somehow to escape, Scott would probably have turned out just like one of these obsequious little creeps: 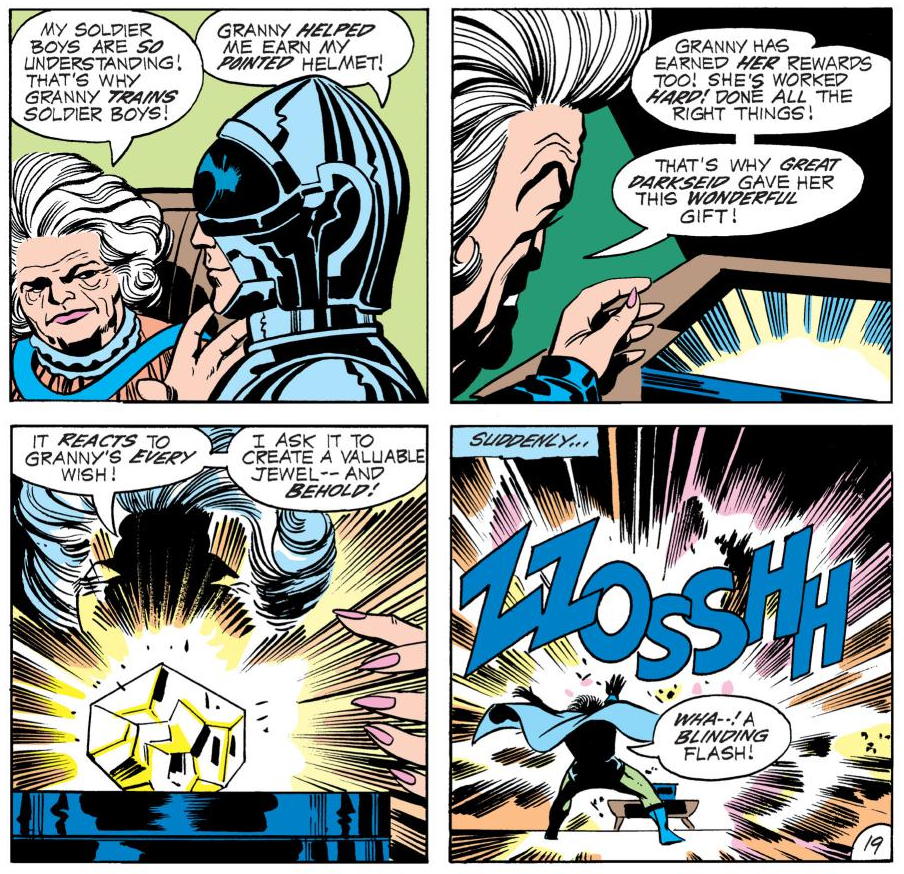 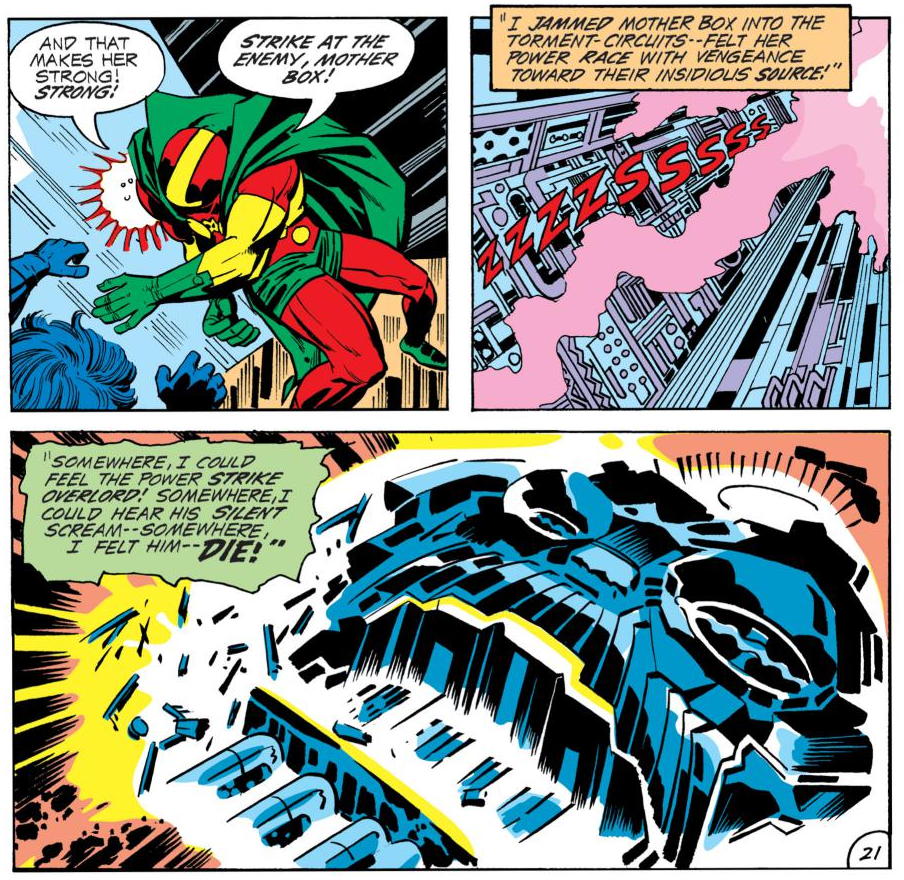 We’ve discussed in previous posts how Mother Box, in all of her iterations, is more than a machine — she is, in some way Kirby never fully defines, alive.  In previous appearances, the writer-artist has emphasized her nurturing and loving — i.e., maternal — qualities.  (“She talks to us — protects us!” Vykin declared in Forever People #1, while in Mister Miracle #1, her pinging “voice” comforted Scott Free’s predecessor as Mister Miracle, Thaddeus Brown, as he lay dying.)  Earlier in this issue, however, we’ve seen that Mother Box has needs of her own, as we watched Scott nurse her back to health by feeding her his love and belief.  Now, Kirby goes even further, strongly suggesting that Mother Box herself can feel negative emotions as well as positive ones, as her retaliatory strike against Overlord is described by Scott as “vengeance”.  And since Overlord himself is more than a mere piece of technology — or is at least perceived as such by both Granny and Scott — Mother Box’s ending of him is to be taken not simply as one machine destroying another, but as one living being killing an equally living enemy.*  In Kirby’s world, the prospect of an artificial intelligence becoming truly alive clearly has a dark as well as a bright side. 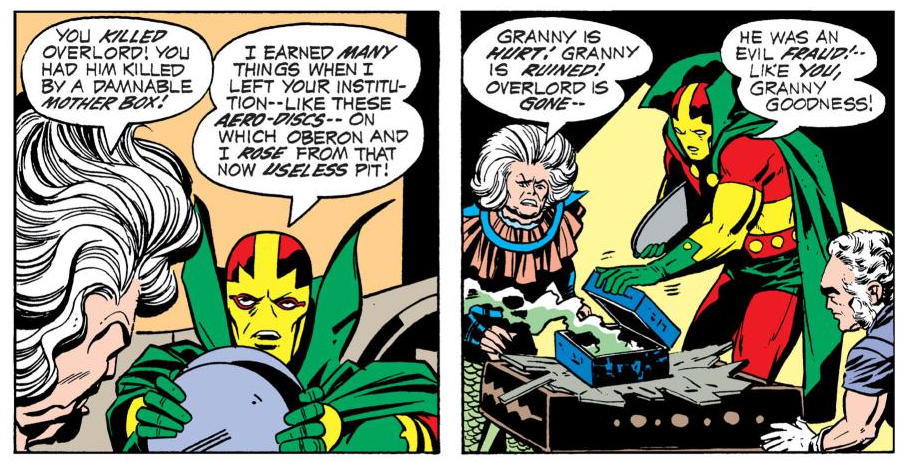 Assuming that Kirby’s misdirection from page 4 has done its work (as it certainly did for the thirteen-year-old me, back in 1971), the revelation of the “true” Overlord should come as a real surprise.  It’s also likely to be at least slightly unsettling, as the being’s diminutive size plays into the earlier descriptions of Overlord as Granny’s “pet” — as being “too precious to be exposed to the world!”  Are we looking at the corpse of Granny’s dead infant child, in its tiny coffin?**

(Never really explained are the logistics of Overlord’s force-beam from earlier in the issue, which seemed to shoot directly from his forehead on page 4 to instantaneously arrive in the interior of Mister Miracle’s testing shack on page 5 — but that’s a minor point, in the end.) 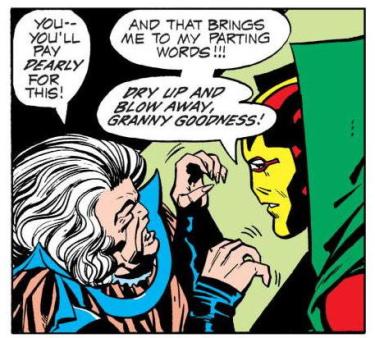 Scott’s “parting words” to Granny Goodness are satisfying in their vehement defiance — though, as we’ll see in the issues to come, he wouldn’t be able to put this first of the two maternal presences in his life (the other one being Mother Box, of course) behind him quite so easily. 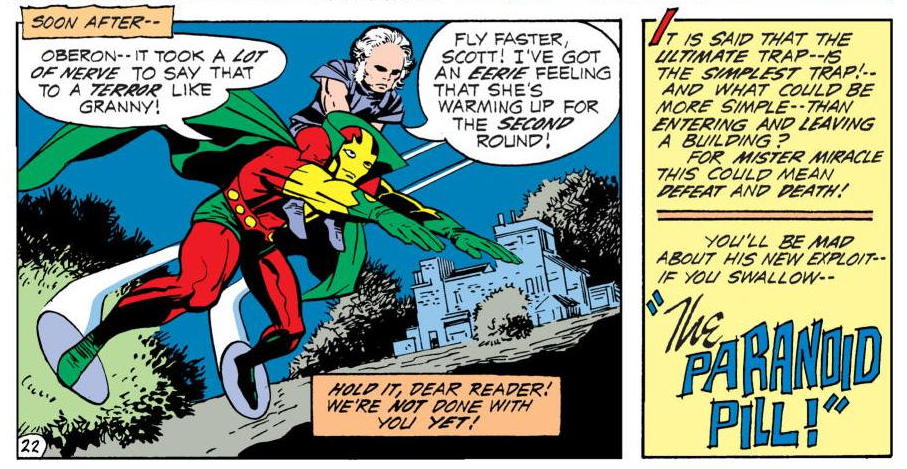 In some ways, Mister Miracle #2 can be considered the second half of the new hero’s “first issue”, as it appears to complete the set-up of the series’ premise that was left half-done at the conclusion of MM #1.  Now, with the revelation of Scott Free’s status as a refugee from Apokolips, we can see how his saga fits in with the other components of Kirby’s overall Fourth World epic.  Of course, we still don’t know Scott’s full story — and the revelation of his true significance, still nine months in the future, will cast everything we’ll have read about him up to that point in a whole new light.

Also still to come is the addition of one more character to the book’s regular cast, without whom the series’ set-up can’t truly be considered over and done.  That character, when she arrives, will bring a much-needed infusion of positive female energy (as contrasted to Granny Goodness’ negative incarnation of such) — not just to Mister Miracle, but to the Fourth World as a whole.

But, of course, that’s a topic for another post, some four months from now.  I hope to see you then.