In June, 1971, we Marvel Comics readers turned to the “Bullpen Bulletins” text page appearing in that month’s issues (including the book that’s the topic of today’s post, naturally) to find the “Stan Lee’s Soapbox” reproduced below.  This was a particularly lengthy edition of editor Lee’s monthly column, taking up almost a third of the page’s available real estate — but considering the occasion, that didn’t seem at all inappropriate.

Amazing Spider-Man #100 was hardly the first Marvel comic to reach the century mark (or, in Lee’s formulation, its “100th anniversary”).  Even discounting such “off-genre” (i.e., non-superhero) titles as Kid Colt Outlaw and Millie the Model, several of the series devoted to Spidey’s costumed cohorts — Captain America, Hulk, and Thor, to be precise — had been in the triple-digits for several years.  Of course, those characters had gotten a leg up on ol’ Web-head by virtue of having inherited their headlining berths from titles (Tales of Suspense, Tales to Astonish, and Journey into Mystery, respectively) that had been around since the Fifties, this predating the dawn of “the Marvel Age of Comics”.  But even if we limit eligibility to those titles that had debuted with brand-new Number Ones since the dawn of said Age, Amazing Spider-Man was preceded in reaching Number One Hundred by the book whose own Number One had launched the whole thing in the first place: Fantastic Four, 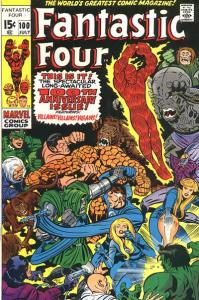 “The World’s Greatest Comics Magazine!”, which had rolled past the 100-issue marker in April, 1970.

Intriguingly, Marvel had let that particular milestone pass without taking any notice of it in the Bullpen Bulletins at all.  Had it simply not occurred to Lee, or anyone else, at the time to do so?  Or might the timing of FF co-creator/artist Jack Kirby’s abrupt departure from the company in March have had something to do with the omission?  Or, alternatively, did Lee simply consider the passage of 100 issues since the advent of Spider-Man — Marvel’s single best-known character (even if not necessarily, as claimed, “the most popular single comic-book character in all the world”) — more worthy of celebration? We’ll probably never know.

In any event, Lee more than made up for having let FF #100 pass with relatively little fanfare with his conspicuous horn-tooting for the equivalent issue of A-SM.  Re-reading this Soapbox a half-century later, I’m particularly struck by what seems to be a good-faith effort on the part of “the Man” to acknowledge the contributions of all the other professionals who’d worked with him on the title to date; that said, it should be noted that (perhaps inevitably) he didn’t quite manage to include everyone.  Don Heck, for example, pencilled a number of issues over John Romita’s layouts in 1967 and 1968 (including my own first issue), but isn’t listed here.  More troubling, however, is the inadequate acknowledgement offered to Spider-Man’s co-creator, Steve Ditko.  While we probably shouldn’t fault Lee for giving Marvel publisher Martin Goodman pride of place among those he thanks — the man was still his boss, after all — his identifying Ditko as nothing more “Spidey’s initial artist” seems, from the perspective of 2021, so wholly deficient a description of his former collaborator’s role in the creation and development of Spider-Man as to be virtually unconscionable.

With that said, it’s probably time for us to move on from discussing Amazing Spider-Man #100 as a half-century old event, and take up the question of how well it worked then — and still works today — as a comic book.

Of course, we have to start with the cover.  Pencilled by Romita — an entirely apt choice, considering that he’d done those honors for well over half of the issues of A-SM published to date, not to mention his copious other contributions in both drawing and co-plotting the series for almost half a decade (plus, it’s not like Ditko would have come back to do the job, even if he’d been asked) — and inked by Frank Giacoia, it serves both to evoke the specific content of the previous 99 installments through its gallery of “friends and foes” portraits and to stand as a timelessly iconic image of the titular hero. Even after fifty years, it remains one of your humble blogger’s favorite covers of any so-called “anniversary” issue, regardless of publisher.

The story, on the other hand, was drawn by Gil Kane, who’d been handling that duty, on and off, for about a year.  Kane’s pencils were inked by Giacoia, who’d also done the same for the previous four issues.  The script, of course, was by Stan Lee.

(If you’re not a regular reader of this blog, you may have just read the above splash page and wondered what happened to all the periods.  If so, you can find an answer [of sorts] at this link.)

Spidey’s battle against the bank robbers goes on for a couple of pages — and though it’s unsurprisingly well-drawn, it doesn’t serve any purpose in the story besides letting Lee and Kane get a little action in early on.  So, we’re going to skip ahead to the fight’s aftermath: 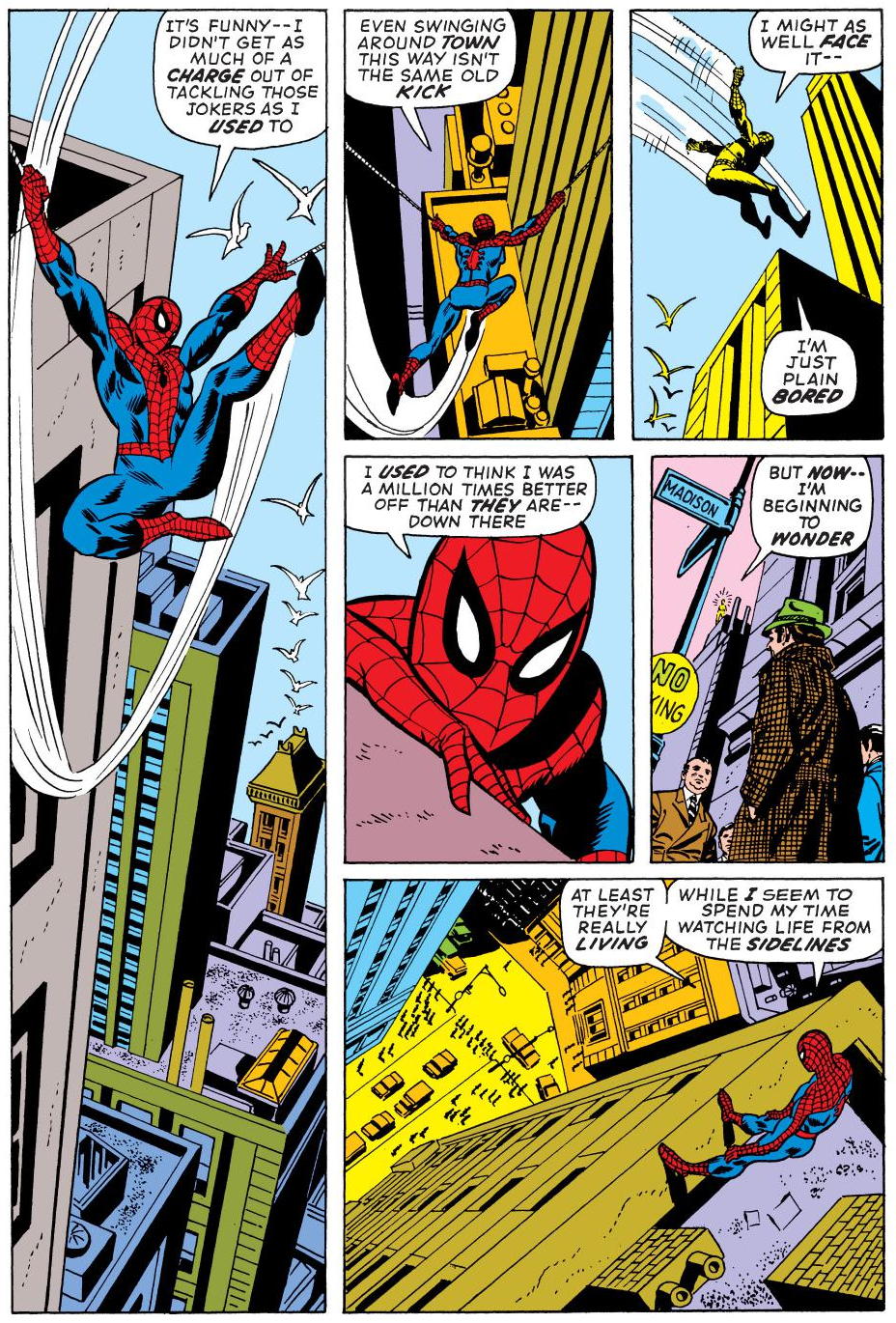 Spidey might be “bored” on this page, but with Kane’s expert use of quick cuts and vertiginous camera angle, readers are unlikely to feel the same way.

Peter Parker had been reunited with Gwen Stacy at the conclusion of issue #98; while I’d bought that issue (along with the first two chapters of the “drug trilogy” that preceded it), I somehow missed the next month’s #99, and so I hadn’t been privy to a scene in that one where Pete had come very, very close to popping the question.  But this page caught me up with the couple’s status quo just fine.

“I’ve been working on this project for years — ever since I first got my spider powers”.  I may be wrong here, but I suspect this information came as news even to those fans who’d collected the web-slinger’s every appearance since Amazing Fantasy #15.  And “potion” sounds more like sorcery than science, at least to me.  But, heck, I accepted this development as a thirteen-year-old reader in 1971, so I guess I’ll let it go this time, too.

If memory serves, however, I was somewhat less accepting of the idea that Peter would attempt to rid himself of his spider-powers, at least for any other reason than that, as he says, his radioactive blood had begun to pose a danger to himself or others.  After all, I’d read 1968’s Amazing Spider-Man Annual #5, in which our hero had managed to clear his late parents of the charge of being enemy spies, but only because he could call on the resources of Spider-Man.  “Never again will I bemoan my secret identity,” Spidey had stirringly declared on that story’s final page, “or toy with the idea of giving it up!”  Stan Lee might have forgotten writing that speech, three years later — but I hadn’t forgotten reading it.

In his potion-addled mind, Peter begins to relive past experiences, including how he began selling photos to the Daily Bugle to help support his widowed Aunt May — and how he once loved Betty Brant, secretary to the Bugle‘s publisher, J. Jonah Jameson… 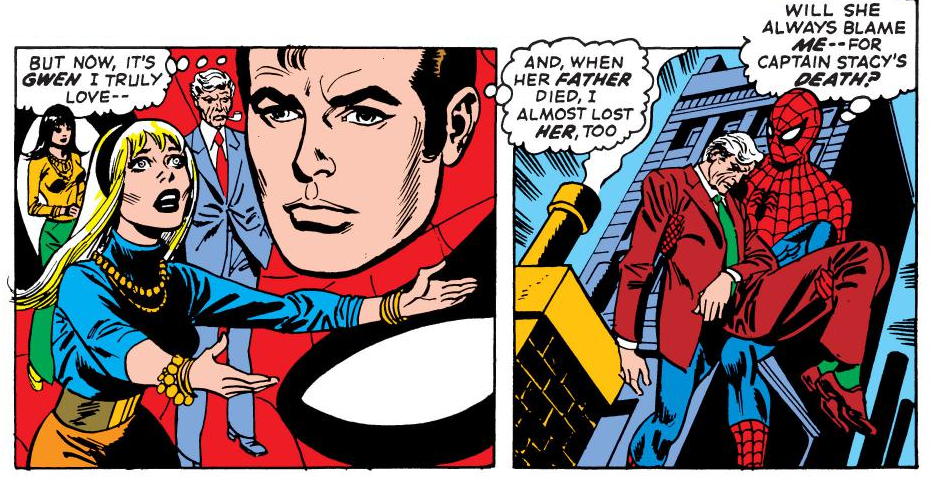 Spider-Man’s brief tussle with the Vulture sets the pattern for how the rest of the story will unfold.  Marvel had already established this approach to milestone issues — in which the hero or heroes appears to fight all their greatest enemies, but not really — in Lee and Kirby’s Fantastic Four #100, where the FF had gone up against a small army of villains who’d all turned out to be simulacra controlled by the Mad Thinker and the Puppet Master.  Here, our hero is fighting dream versions of his arch-foes, but the effect is much the same; the fight doesn’t feel “real”, at least not to a literal-minded reader such as I was in 1971.  Back then, I turned up my nose at dreams, hoaxes, and imaginary stories — I wanted the action in my stories to count, dammit.

No sooner has the wall-crawler vanquished the Vulture than the Lizard rears his ugly head –and his ugly tail, too.

The thing was, despite my disdain for “dream” combat, Kane’s action scenes were so much fun to look at that I couldn’t not enjoy the story — even as an easily-defeated Lizard gave way to the Green Goblin, who’d recently taken Spidey a full three issues to trounce… 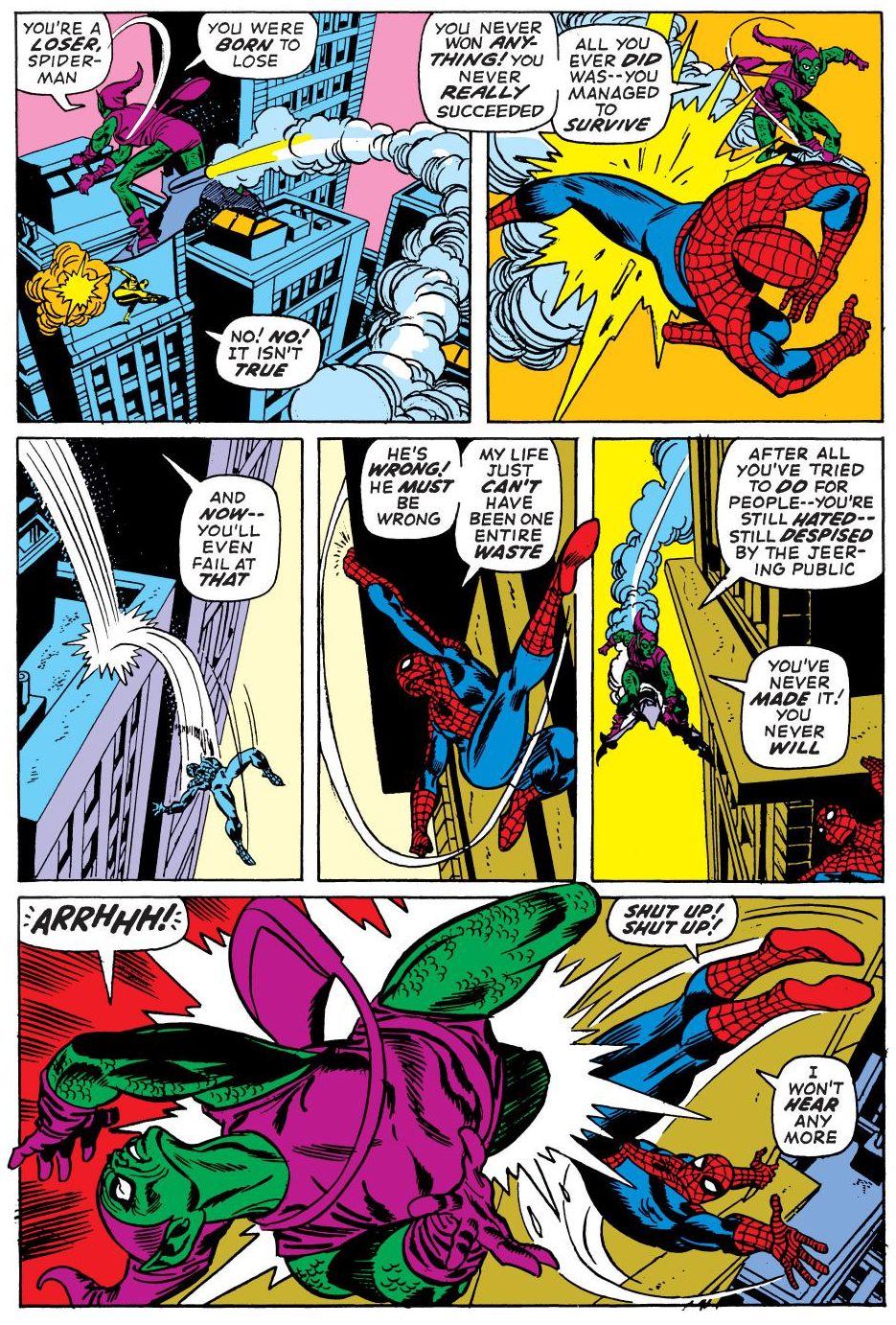 …but gets his ass handed to him within a little more than a page in our hero’s dreamscape.

Side hurting?  Oh, that doesn’t sound good — not even in a dream.  Especially not with Doctor Octopus about to turn up…

And, of course, along with the fight scenes, there was the psychodrama.  Perhaps it can’t help but come off as heavy-handed by today’s standards, but I found it effective and involving as a thirteen-year-old reader.

Spidey sends Doc Ock packing as readily as he has his other foes, and then resumes his quest to find the sourxe of the mysterious voice that continues to call to him:

Two more blows, and the Kingpin is down and out:

Re-reading this sequence today, I’m afraid that I can’t help but be reminded of a certain scene from the film Monty Python and the Holy Grail.  Luckily, in 1971 that movie was still four years in my future.

These three final panels on the story’s next-to-last page seem very copy-heavy, to the point that one may be tempted to think that Kane didn’t leave Lee quite enough room to say everything the writer wanted to.  On the other hand, the artist’s panel compositions clearly did leave plenty of open space for verbiage; it’s just that Lee used every single bit of that space.

Wordy as it is, this rephrasing of Spider-Man’s essential “power and responsibility” mission statement — intriguingly cast in an almost-religious context here — is appropriate to the occasion.  I believe that even my thirteen-year-old self thought so, despite my being peeved at the very idea of Peter once again questioning his calling, given the events of A-SM Annual #5.

And now, it’s time to turn to the last page and see if the story’s conclusion lives up to its cover billing as “The Wildest Shock Ending of All Time!”  I don’t know about you, but I’m betting on it having something to do with our hero’s achin’ sides… 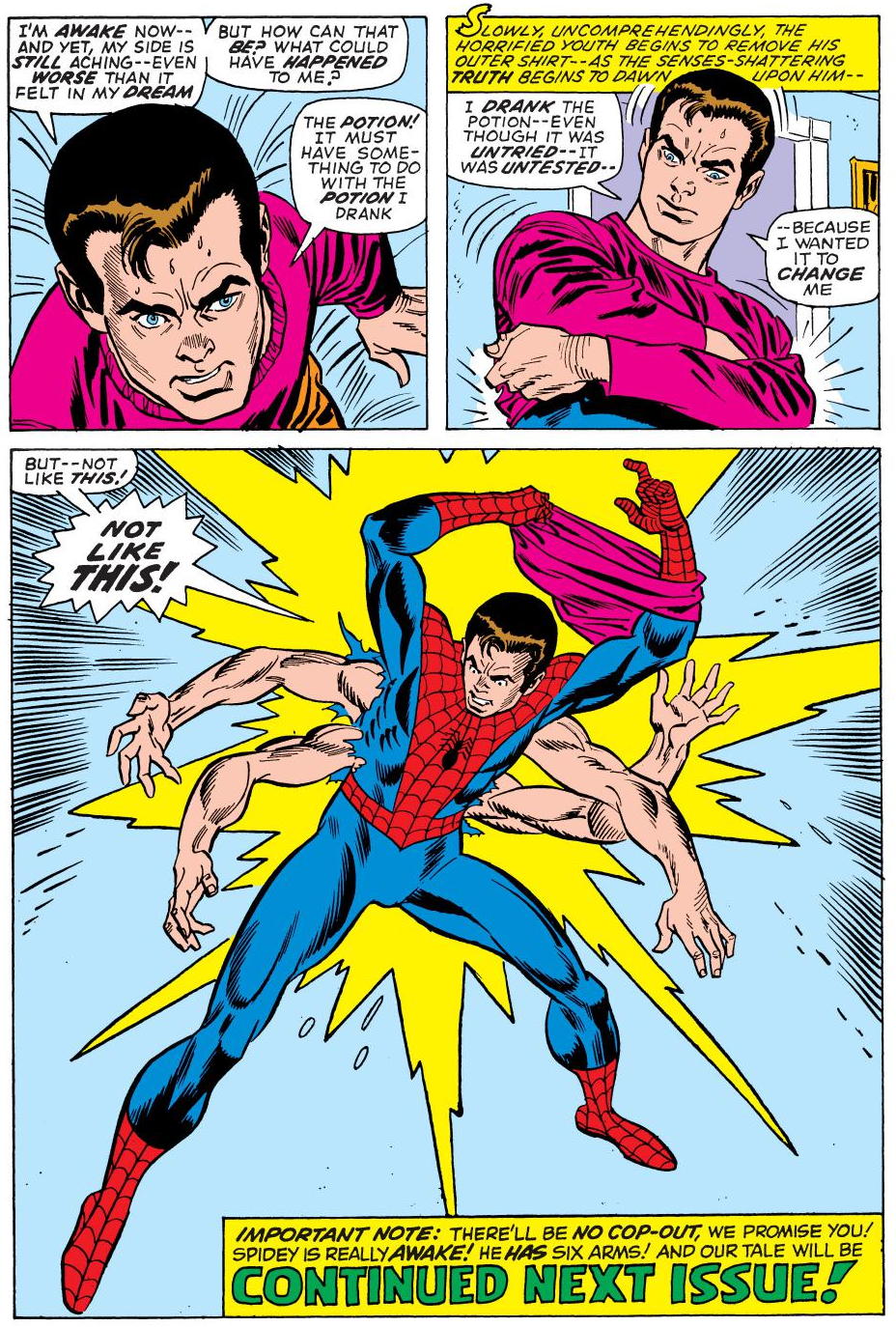 I can’t speak for anyone else who bought this book off the stands in June, 1971, but I can assure you that I, at least, absolutely did not see this coming.

Evidently, neither did Marvel associate editor Roy Thomas — which was really too bad, as he — not Stan Lee — was going to have to come up with a resolution for this unexpected development.  As the two men recollected (or tried to) in a 1998 conversation for Comic Book Artist:

Roy: The final time you came back as a regular writer in the comics, after you spent those four months working with [film director] Alain Resnais.

Stan: Did I really take four months off?

Roy: Yeah. You wrote up to Spider-Man #100, which you ended by giving him four extra arms and tossed it to me, saying, “Take it, Roy.” I was stuck with a six-armed Spider-Man for a couple of months! [laughs]

Stan: I thought you gave him the extra arms!

Roy: No, that was at the end of your story, so I can get out of that one!

While he might not have been to blame for the bizarre notion of an eight-limbed Spider-Man, Thomas — and Gil Kane — were nevertheless going to have to deal with it.  How the two creators managed that feat — and what it had to do with the debut of Marvel’s first Comics Code-approved sort-of-vampire character — is, naturally, a topic for another post.  I hope you’ll join me for that one, coming next month.