As I noted in my post about Green Lantern #81 back in October, that issue had concluded on a note of finality, with Denny O’Neil’s script commemorating the end of the cross-country (and cross-galaxy) journey that the title character and his fellow emerald-hued hero, Green Arrow, had been on since O’Neil and artist Neal Adams had launched the series on a new, “relevant” trajectory, beginning with issue #76.  Readers at the time might well have wondered if Green Lantern had been cancelled, especially when an issue of the title, previously published on an eight-times-a-year schedule, didn’t appear on the racks in November, as had been the case since the 10th issue back in 1961.

But, in December, 1970, a new issue of Green Lantern (now being published bi-monthly) did finally show up — and things didn’t seem to have changed much, if at all.  As proclaimed by the cover logo, this was still the “all-NEW! all-NOW! Green Lantern co-starring Green Arrow”.  Neal Adams’ presence as cover artist indicated continuity with preceding issues as well.  If anything seemed off at all, it might have been that after a couple of issues whose covers heralded their socially relevant themes quite overtly — i.e., #80‘s graphic evocation of the Chicago 8 trial, and #81’s direct reference to the “population explosion” in its blurb text — #82’s depiction of our two heroes being besieged by mythological harpies suggested that we’d moved back into the area of pure fantasy.

Or did it?  Could it be, perhaps, that those harpies… weren’t just harpies? END_OF_DOCUMENT_TOKEN_TO_BE_REPLACED

Green Lantern #81, the sixth issue of writer Denny O’Neil and artist Neal Adams’ classic “Green Lantern/Green Arrow” run, represented a couple of “firsts” for the series.  For one, the superheroine Black Canary, who’d previously appeared in issues #78 and #79, was cover-billed as a guest-star for the first time.  For another, this was the first installment that overtly heralded the major social issue dramatized within the book’s pages with a cover blurb, i.e., the “Population Explosion!”

Along with these firsts, however, issue #81 almost had the added distinction of being the last issue drawn by Neal Adams.  As the artist would later tell interviewer Arlen Schumer (in Comic Book Marketplace #40 [Oct., 1996]), “I thought we started to run out of ideas when we ran the overpopulation story… Politically, I had a problem with the book.” END_OF_DOCUMENT_TOKEN_TO_BE_REPLACED

According to the Mike’s Amazing World of Comics web site, Robert Kanigher scripted 2,707 comic book stories in his five-decade career, the vast majority of them for DC Comics.  But despite the fact that I’ve been reading DC comics myself for over five decades — three of which overlap with those during which Kanigher was working — I’ve never really felt like I had a handle on the guy.  END_OF_DOCUMENT_TOKEN_TO_BE_REPLACED

I have no doubt that many of the comic book fans who picked Green Lantern #80 up out of the spinner rack in August, 1970, took one look at the cover and immediately thought of Bobby Seale, and the 1969-70 trial of the Chicago Eight/Seven: 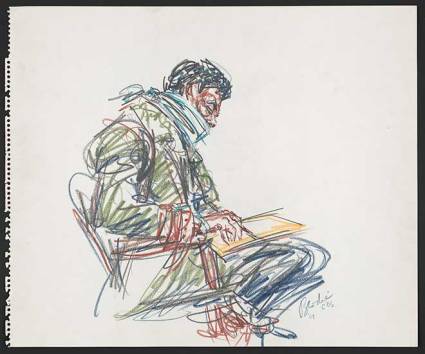 Courtroom sketch by Howard Brodie, from the collection of the Prints and Photographs Division, Library of Congress.

But I’m also pretty sure that my thirteen-year-old self wasn’t one of them.

While I feel certain that the CBS Evening News with Walter Cronkite (which, along with Mad magazine, was my main source of information on current affairs in those days) covered that story, I don’t remember being anything more than dimly aware of it, if that.  (My family usually had “Uncle Walter” on while we were doing other things, like eating dinner, which made it pretty easy to miss stuff.)  And so, when I scrutinized artist Neal Adams’ dramatic cover for GL #80, I didn’t understand that it was directly referencing the October 29, 1969 incident in which Judge Julius Hoffman had ordered Seale, a defendant with seven others in a federal case charging them with conspiracy and other crimes, to be bound and gagged following the latter’s allegedly disruptive behavior in the courtroom. END_OF_DOCUMENT_TOKEN_TO_BE_REPLACED

As regular readers of this blog know, I went through a brief period at age 12, lasting roughly from the fall of 1969 through the spring of 1970, when, for one reason or another, I became disaffected with

comic books.  By June, 1970, my interest in them was again on the increase, but I wasn’t quite all the way back yet; and one unfortunate consequence of this was that I failed to buy Justice League of America #82 off the stands when it was released that month.  Why was missing this one comic such a big deal?  Simply because it featured the first chapter of that year’s two-part team-up between the Justice League of America and their counterparts on “Earth-Two”, the Justice Society of America — an annual summertime tradition at DC Comics ever since 1963, and one in which I’d faithfully participated ever since 1966.  That mean that not only had I been buying and enjoying these mini-epics for most of the time I’d been reading comics, but for a significant chunk of my life, period.  Four years is a pretty substantial period of time when you’re only twelve years old, after all.  END_OF_DOCUMENT_TOKEN_TO_BE_REPLACED

On July 21, 2015, this blog made its debut with a post entitled “It was the summer of ’65…”.  In that first installment, I described my earliest experiences with comic books, leading up to to my very first comics purchase in the, well, summer of ’65.  Since then, I’ve been writing about some of the most interesting individual issues I bought in my first few years as an avid comics reader (and nascent collector), while also attempting to chronicle, more generally, the evolution of my own comics tastes and interests, and setting that personal narrative in the broader context of what was going on in the funnybook industry (and, more broadly, in American culture), during those years.

But now, almost half a decade after starting this project, I’ve reached the point in the narrative of my comic book buying and reading where that story almost came to an end, fifty years ago.  I’ve arrived at the time in my life when, at least for a while, I stopped buying comics.  END_OF_DOCUMENT_TOKEN_TO_BE_REPLACED

Justice League of America was my first favorite comic book.  As I’ve written about here before, it was the first series I subscribed to through the mail (my first USPS-delivered issue being #44, in 1966), and even after my sub ran out, I managed to score every new issue when it hit the spinner racks — up until issue #69, that is, which I either missed or intentionally passed on (the former seems a bit more likely, but who knows).  A couple of months later, I missed (or skipped) #72 as well; and then, after #74, I apparently more-or-less dropped the book.  In any case, I didn’t buy another issue of JLA until the one I’m writing about today, which arrived on stands in January, 1970.  By this time, as regular readers of the blog know, I had entered a period in which comic books in general held less appeal for me, and I was buying hardly anything at all.  So what could have grabbed me about Justice League of America #79 so much that I felt compelled to pick the book up?  END_OF_DOCUMENT_TOKEN_TO_BE_REPLACED

If you’re a regular reader, you may recall that at the conclusion of last month’s post concerning Avengers #69, your humble blogger unburdened himself of a shameful, half-century-old secret — namely, that upon his first encounter with the brand-new supervillain group the Squadron Sinister way back in August, 1969, he had not the faintest clue that they were intended as parodies of the Justice League of America — who were, of course, the Avengers’ counterparts over at Marvel Comics’ Distinguished Competition, not to mention a team that he’d been reading about regularly for almost four years.

Imagine my gratified surprise when, subsequent to that post going up, I heard from a number of fellow old fans that they, too, had failed to get writer Roy Thomas’ joke back in the day.  I’m honestly not sure whether that means that my twelve-year-old self wasn’t all that dumb after all, or simply that a lot of us were that dumb, but either way, I’ll take it as a win.  END_OF_DOCUMENT_TOKEN_TO_BE_REPLACED

The second half of 1969’s iteration of DC Comics’ annual summer event teaming the Justice League of America with their Golden Age predecessors, the Justice Society of America, sported a cover that was — for this particular twelve-year-old’s money — considerably more exciting than the previous issue‘s.  That cover had featured a row of JSAers looking on passively while some nameless kid ripped up a lamppost; this one, pencilled and inked by Neal Adams, heralded the first meeting between the Superman of Earth-One (the one currently appearing in multiple DC titles every month) and the Superman of Earth-Two (the one who’d ushered in the whole Golden Age of Comics in the first place in 1938’s Action Comics #1) — and from the looks of things, it was going to be a, shall we say, rather contentious meeting.  That I would buy this comic book was never in question; but I have a hard time imagining anyone who was even a casual reader of DC superhero comics seeing this book in the spinner rack in July, 1969, and not picking it up.  END_OF_DOCUMENT_TOKEN_TO_BE_REPLACED

Throughout my fifty-four years of reading comic books, it’s hard for me to think of another cover that was as much of a pleasant surprise on first sight than Neal Adams’ cover for The Brave and the Bold #85.  This goateed, grimacing tough guy, aiming an arrow out in the general direction of the viewer that didn’t look the least bit “tricky”, but rather looked quite deadly — this was Green Arrow?

The thing is, I actually already liked Green Arrow.  Not that he was one of my very favorite characters, or anything like that; in fact, I’m fairly certain I’d never even read a solo tale featuring DC Comics’ Emerald Archer at this point, though that may have been mainly because I’d never

really had the chance.  (GA had lost his regular backup slot in World’s Finest in early 1964, a full year-and-a-half before I began buying comics; and though there’d been a few of his tales reprinted here and there since then, I’d missed them.)  But I enjoyed seeing him in Justice League of America, perhaps at least in part because of his underdog status.  While I generally favored JLA tales that focused on the team’s heavy hitters — Superman, Batman, etc. — I also appreciated those stories that allowed the “lesser” heroes their time in the spotlight, the way that Justice League of America #57 did for Green Arrow.  I didn’t even mind all that much when the storytellers (writer Gardner Fox and artists Mike Sekowsky and Sid Greene, in this case) subjected the Battling Bowman to such silliness as the scene below, where GA, facing four armed criminals, takes the time to set up a trick shot because… it’s just more fun, I guess? END_OF_DOCUMENT_TOKEN_TO_BE_REPLACED