My very first issue of The Flash sported a very dramatic cover, featuring a “Wanted” poster bearing the faces of both the Scarlet Speedster and his secret identity, police scientist Barry Allen.  When I first picked the book out of the spinner rack, however, I didn’t get the idea at all.

I’d already encountered the Flash in Justice League of America #40 (at least I think I had — it and Flash #156 have the same cover date, and the Grand Comics Database doesn’t provide actual dates of publication for either, unfortunately).  He never appeared as Barry Allen in that issue, however, and I had no idea what the word “alias” meant.  So, I thought the two guys on the poster were two different people.  But whoever this “Barry Allen” might be, he was obviously in big trouble with the pretty young woman clutching a tear-soaked handkerchief, just as the Flash had self-evidently earned the ire of his (previously unknown to me) teenage sidekick, Kid Flash.

Of course, I didn’t get very far into the issue before my misapprehension was corrected.  In “The Super-Hero Who Betrayed the World!” (not credited within the issue, though the GCD reports that it was written by John Broome, drawn by Carmine Infantino, and inked by Joe Giella), an alien named Klkan, from the planet Gyr, teleports into a meeting of the United Nations’ General Assembly and informs the delegates that the Earth will be destroyed unless the Flash is surrendered to him.  When the Flash is contacted, however, he shockingly refuses to give himself up, and Klkan gives the Earth an ultimatum — unless the Flash is delivered to him within hours, the Earth will be destroyed.  To make the task of finding and capturing the Flash just a little easier, Klkan helpfully informs the whole world that the Flash is actually Barry Allen, a scientist working in the Central City Police Department.  Whoa!

This is obviously bad news for Barry, as his fiancée, journalist Iris West, becomes extremely pissed off at him for having lied to her for years, constantly pretending to be a habitual “slowpoke” — not to mention this business about him being a traitor to the human race.  Also upset is Iris’ nephew Wally, who, unknown to her (even after Barry’s outing), is Kid Flash — the Flash’s protégé, with identical super-speed powers.  Wally promptly zips from his hometown of Blue Valley to Central City to find out what’s up with his mentor, and soon runs into him (no, not literally).  As is soon revealed, Klkan and his confederates on Gyr, the tyrannical Drdons, need the Flash’s faster-than-light speed to power a time machine so they can go back into the past and defeat the rebels who recently toppled them from power.  Flash is convinced, however, that the Drdons plan to destroy the Earth regardless of whether he helps them or not, which explains why he has committed the “treason” of not unconditionally surrendering himself to their tender mercies.

All is not lost, however, as Flash ultimately manages to foil the Drdons with Kid Flash’s help.  While he does indeed turn himself in, and even helps the Drdons travel back in time (making this, I’m reasonably sure, the first time-travel story I encountered in any medium), he is also able to use his powers to aid the Gyrian freedom fighters so that things turn out the same way regardless.  The grateful rebel leaders then confirm that yes, the Drdons have already initiated a “radioactive chain-reaction” that will blow up the Earth, but then they helpfully provide our heroes with a “jet-spray formula” that can counteract the chain-reaction.  All Flash and Kid Flash have to do is run at sufficient speed to spray the formula over every inch of the Earth’s surface before it’s too late.  Which, of course, they manage to do, just in the nick of time.  Whew!

The Earth is saved, but all is not yet well, as the whole world still knows that Barry Allen is the Flash, and of course that just won’t do.  Flash realizes he can use the Gyrians’ time-travel method to turn back the clock, but before he commits to doing so, he visits Iris to explain the situation, and ultimately leaves the decision up to her, resulting in this memorable scene: 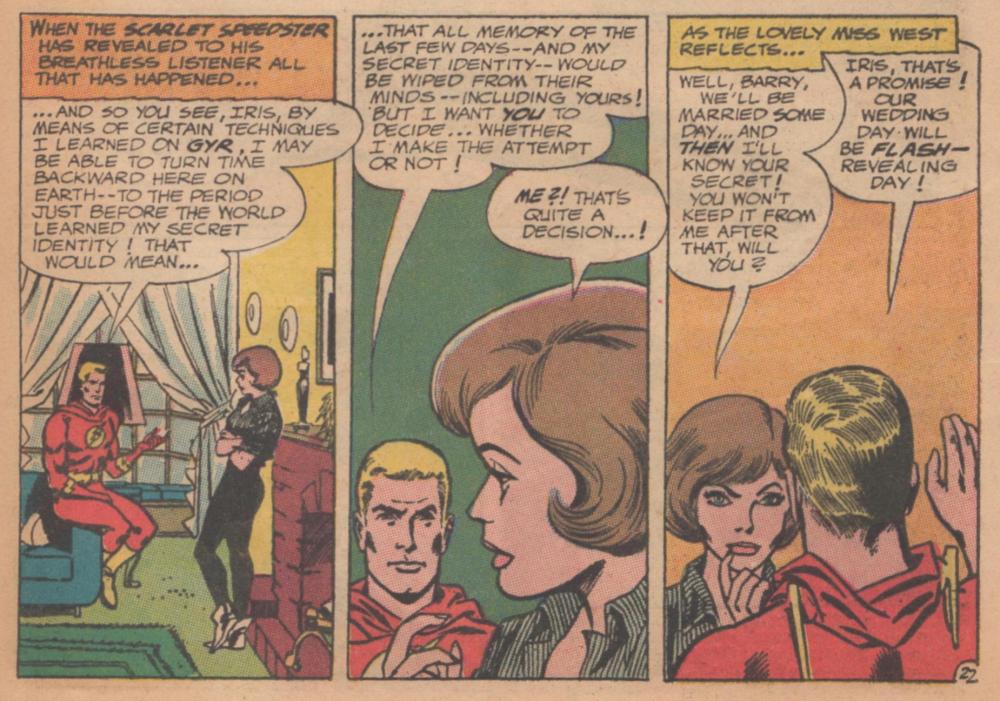 DC was not particularly concerned with issue-to-issue continuity in 1965 — I expect you could read all the Flash stories they published that year in any random order, and never be confused — but this particular scene would be remembered, and would have significant repercussions in years to come.  (Assuming this blog lasts long enough, we’ll eventually get around to covering them.)

Finally, with Iris’ blessing, the Flash builds a cosmic treadmill that circles the entire Earth!  And by running really, really, really fast, he makes time go in reverse so that the last couple of days never happened, and no one besides himself remembers anything at all about Klkan and the Drdons, let alone that the Flash is really Barry Allen:

As I recall, when Superman: the Movie came out 13 years after this comic book was published, there was considerable grousing from comics fans that the sequence near the end of that film when Superman flies around the Earth to make it spin backwards on its axis, thus causing time to run in reverse, was utterly ridiculous, and would never have been allowed to see print in a DC comic book.  Re-reading Flash #156 today, however, I think we fans were maybe a little too generous in our estimation of DC’s editorial standards.  If there’s any measurable difference in outrageousness between how Superman saves the day in that movie, and how Flash saves his bacon in this comic, it’s a difference of degree, and not of kind.

And so we come at last to the final scene of our story.  Barry shows up late for a dinner date with Iris (of course). She immediately begins to mercilessly (if cluelessly) chide him for his laziness and lack of ambition, while Barry just self-satisfiedly smirks to himself: