Today’s post is the fourth in a series we’ve devoted to chronicling a storyline that ran through a number of Marvel comics in the first few months of 1969 — a sort of “stealth crossover” in which a number of the publisher’s heroes got involved (some without even knowing it) in foiling the dastardly plot of three (allegedly) big-brained super-villains intent on (what else?) taking over the world.  The comics readers of that time (your humble blogger among them) had to be paying close attention to all the editorial footnotes in the comics involved to follow the story (and even then, it was a hit-or-miss affair) — because, in high contrast to today’s multi-title “events”, Marvel’s in-house promotion for the crossover was virtually non-existent. 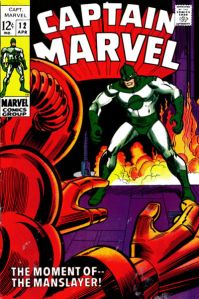 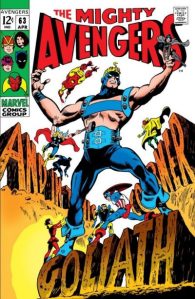 Things had first gotten rolling in January with Captain Marvel #12, in which the titular hero battled a powerful android, the Man-Slayer, that was trying to wreck a U.S. missile base in Florida called “the Cape” (as in Canaveral).  The Man-Slayer’s rampage was ultimately shut down not by Mar-Vell, however, but rather by S.H.I.E.L.D. operative the Black Widow, who was promptly taken prisoner by the Man-Slayer’s unseen masters.  Moving into February, Avengers #63 revealed the Widow’s captors to be the Mad Thinker, Egghead, and the Puppet Master.  The Widow was rescued by her boyfriend, the Avenging archer known as Hawkeye, though not before he’d downed a vial of Dr. Henry Pym’s growth serum and become the new Goliath.

The following month, March, brought the next three parts of the crossover — a “titanic trilogy” (as one of the referencing footnotes called it) that began with Sub-Mariner #14, as Prince Nanor fought someone who first appeared to be his old war buddy, the original Human Torch (but who actually turned out to be the Torch’s former 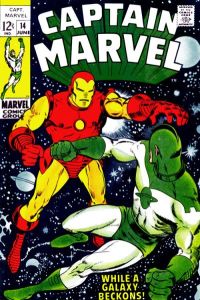 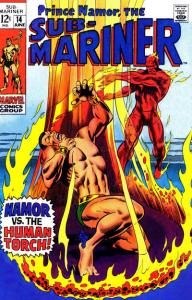 sidekick,Toro).  At the time, the “Torch” was under the control of the Mad Thinker, but he eventually threw off the villain’s yoke, and the two heroes ultimately joined together and put an end to the Thinker’s part of the villains’ three-way scheme — blowing up the Thinker (and Toro, too, unfortunately) in the process.  From that issue (which was, incidentally, the only one my then eleven-year-old self didn’t manage to buy new off the stands), the story moved back into Captain Marvel, as the bad guys had yet another go at destroying the Cape — this time by sending a Puppet Master-controlled Iron Man to first kill Mar-Vell and then wreck the base.  That stratagem went seriously south, however, when the Armored Avenger had a sudden heart attack (seriously), and, in a fit of pique, the P.M. threw his radioactive Iron Man doll into his equipment, inadvertently blowing himself up.

Which brings us to the next installment, with Egghead as the Last Evil Genius Standing — both of his partners now having been explosively taken out of commission (though not fatally so; for, as we related last week, both the Thinker and the Puppet Master would show up hardly more than a year later in Fantastic Four #100, quite alive and looking little the worse for wear).  Just to go by the first three pages of Avengers #64, however, Egghead is managing just fine on his own, so far: 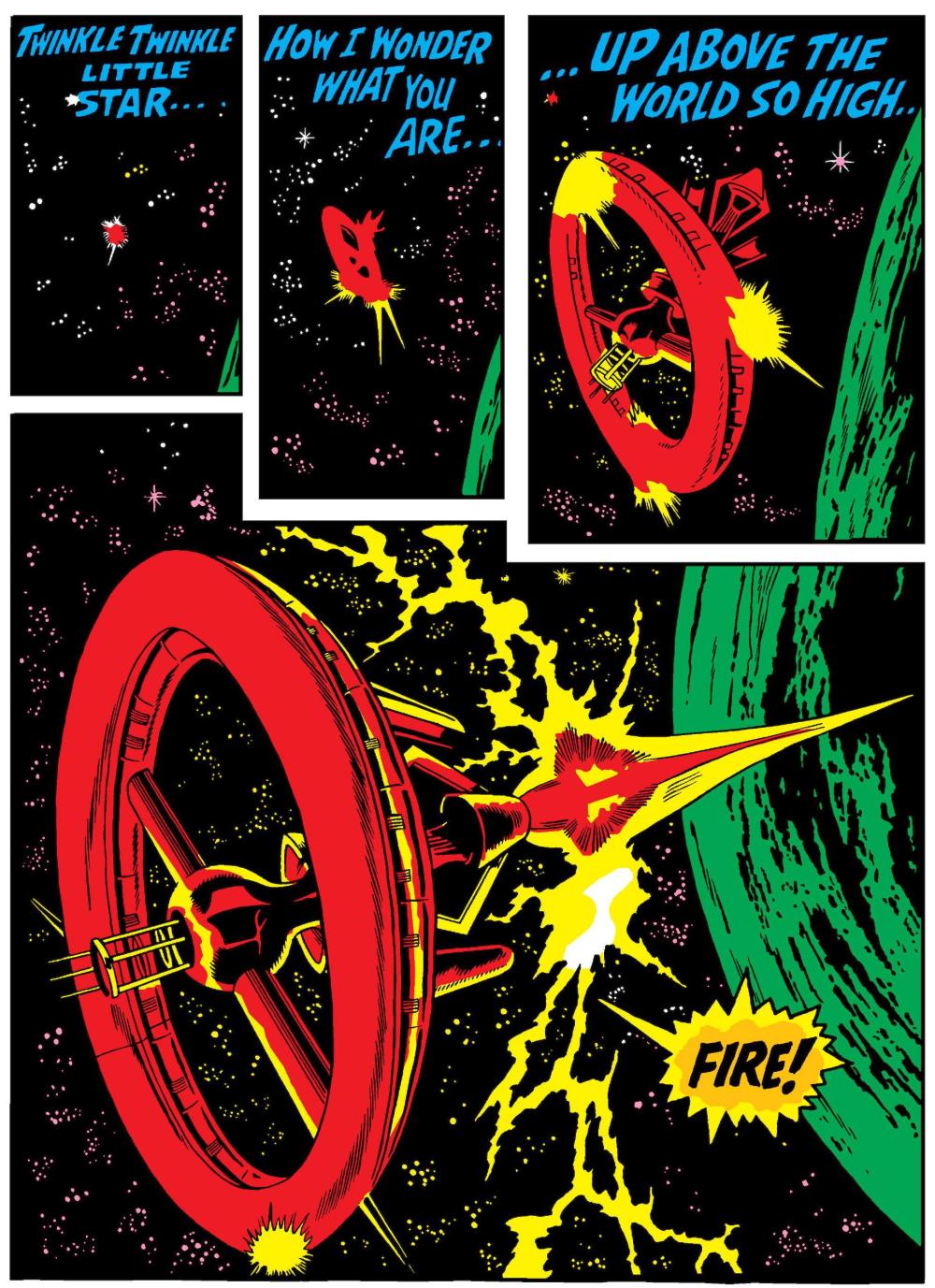 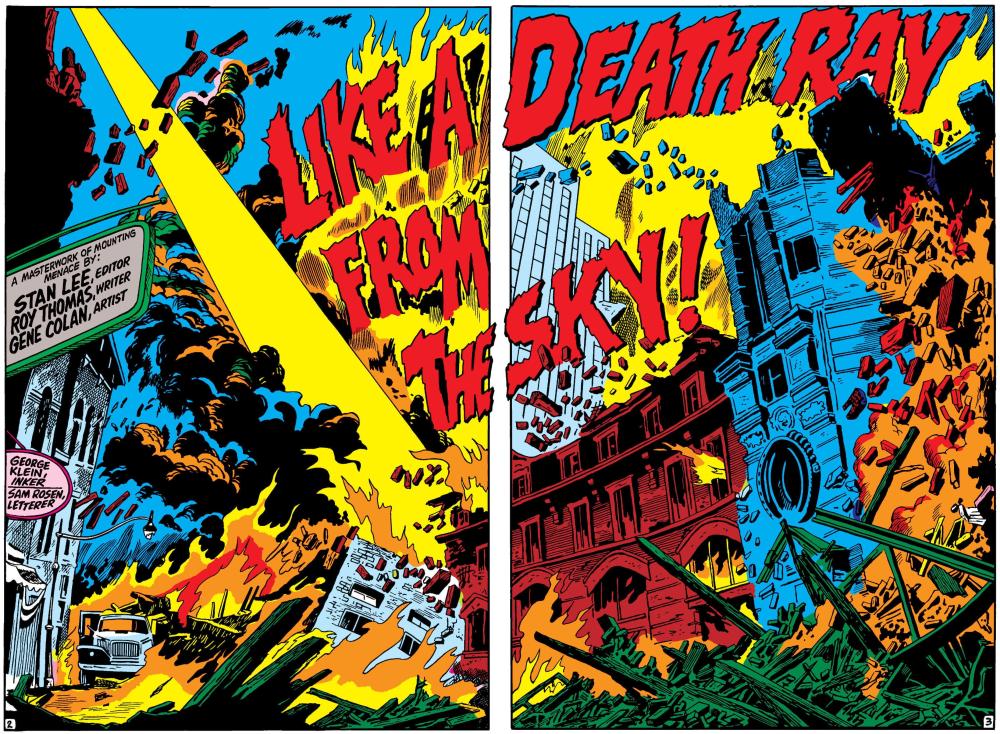 This initial sequence is another innovative variation on the standard “opening splash page”, of the sort that was becoming more and more common at Marvel in this era, particularly in comics written by Roy Thomas.  Thomas, regardless of the artists he was working with (here, of course, it was penciller Gene Colan and inker George Klein), seems to have been the single creator most eager to step up and take advantage of the freer hand, graphic design-wise, that editor Stan Lee had begun to allow in the wake of writer-artist Jim Steranko’s success on “Nick Fury, Agent of S.H.I.E.L.D.” and other features. 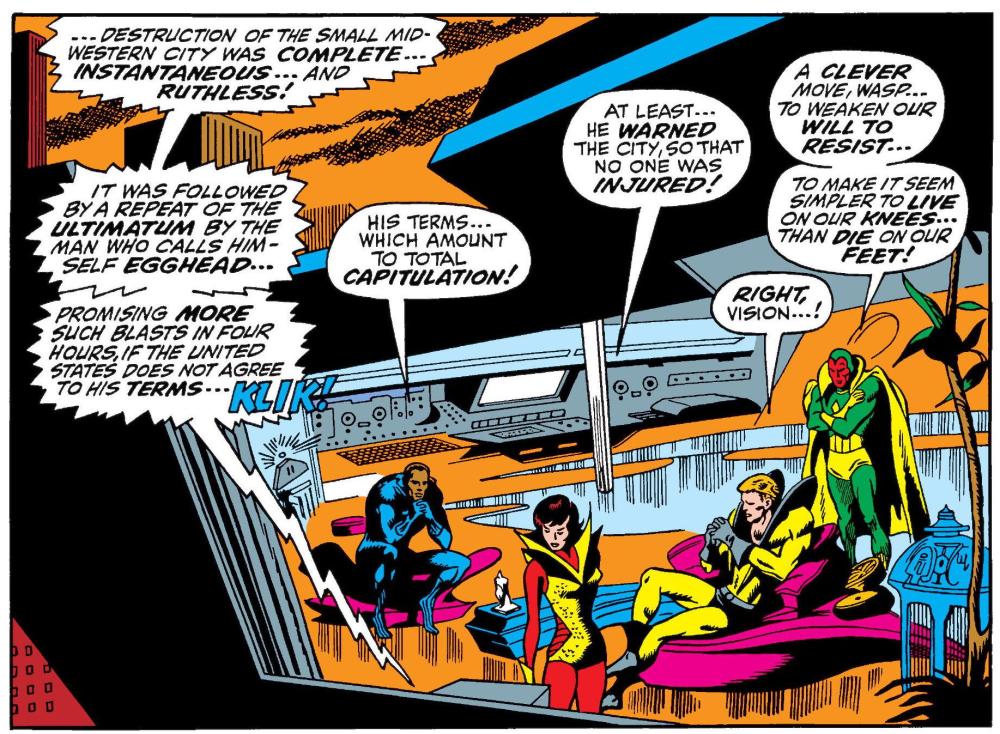 Sub-Mariner #14 had indicated that the three villains’ master plan had called for a “triangle of terror”, in which death-and-destruction rays would be emitted from the Puppet Master’s base in the Caribbean and the Mad Thinker’s lab in the Pacific as well as from Egghead’s orbiting space station — but as shown here, Egghead’s single corner of the triangle is plenty destructive, all by itself. 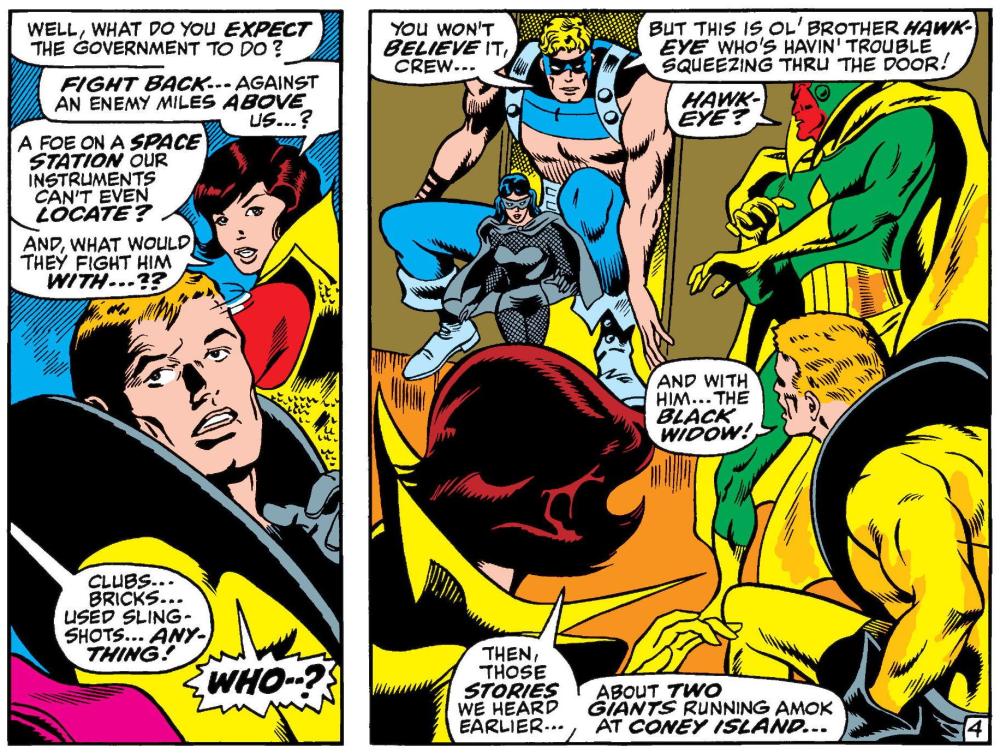 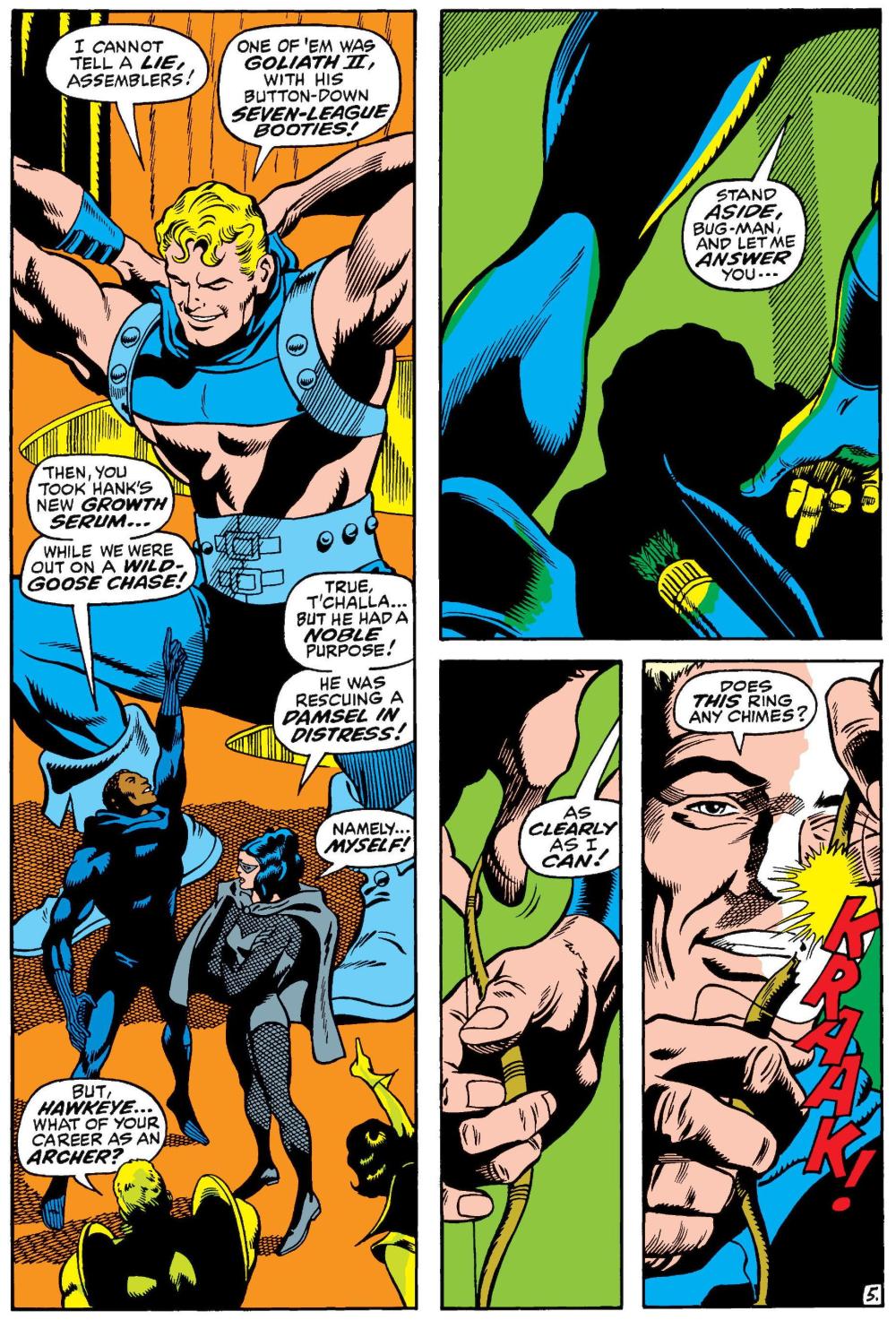 Wow — that’s a pretty cavalier attitude that Goliath shows here regarding the highly advanced skill that has been his whole modus operandi as a costumer adventurer for, well, ever.  (At least, that’s how it comes across to sixty-one-year-old me, in 2019.  In 1969, I doubt it fazed eleven-year-old me very much, if at all). 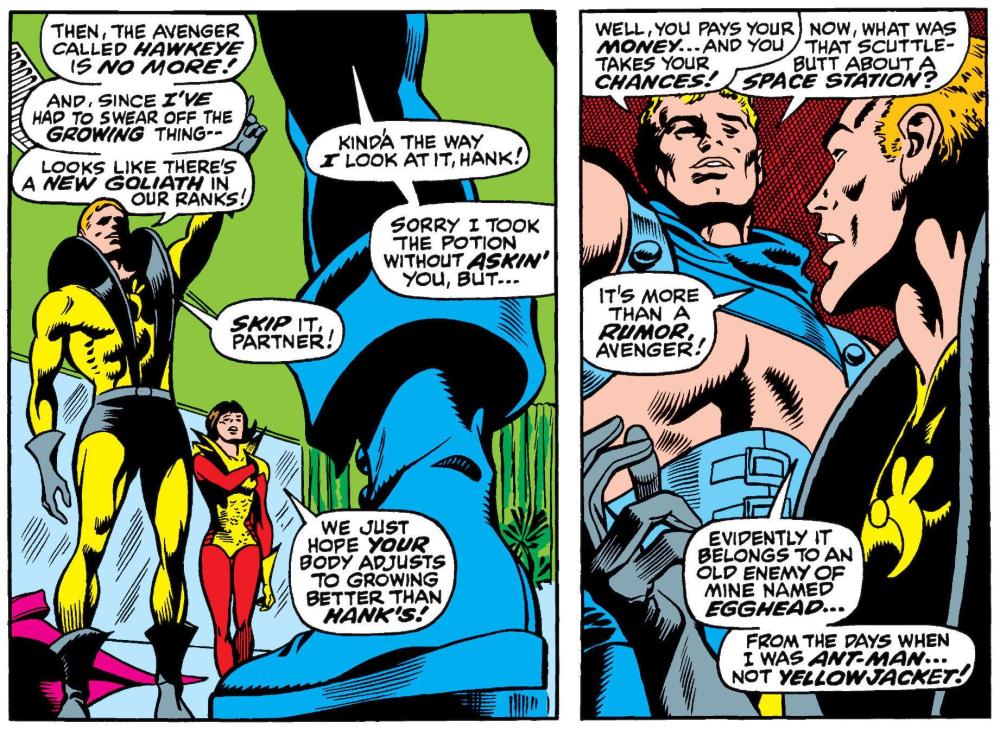 “…and you takes your chances!”  More words demonstrating a pretty casual attitude on the former Hawkeye’s part, here directed towards the possibility that his use of Hank Pym’s growth serum may result in serious mental illness somewhere down the line.  On the other hand, he’s right about one thing — there is the pressing matter of that death-ray machine in the sky to deal with right now.

Before the assembled Avengers can get very far towards devising a plan of attack, however, their butler Jarvis buzzes in to let them know he’s bringing a guest their way.  “Masks on — those of us that need them!” announces T’Challa, the group’s current chairman… 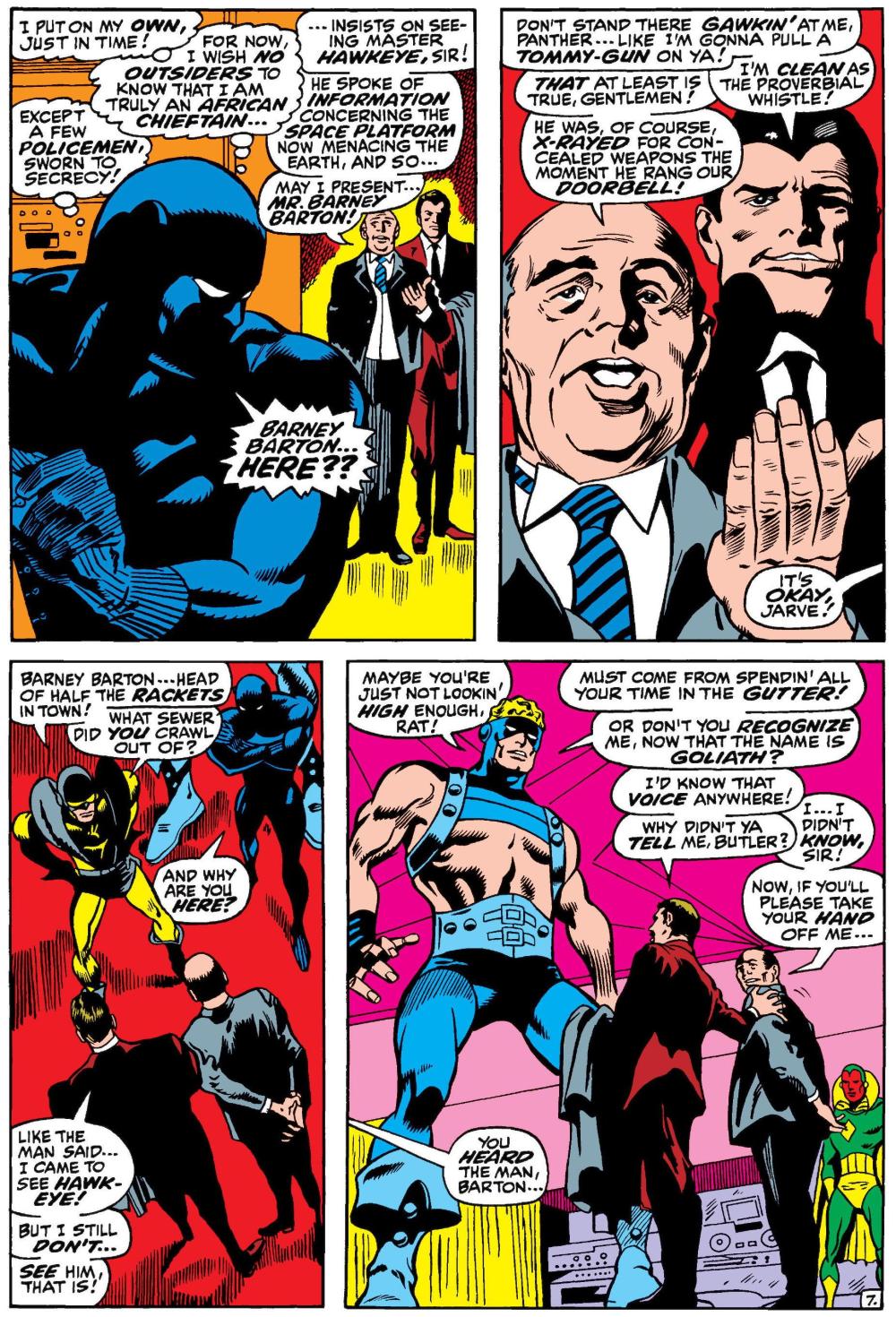 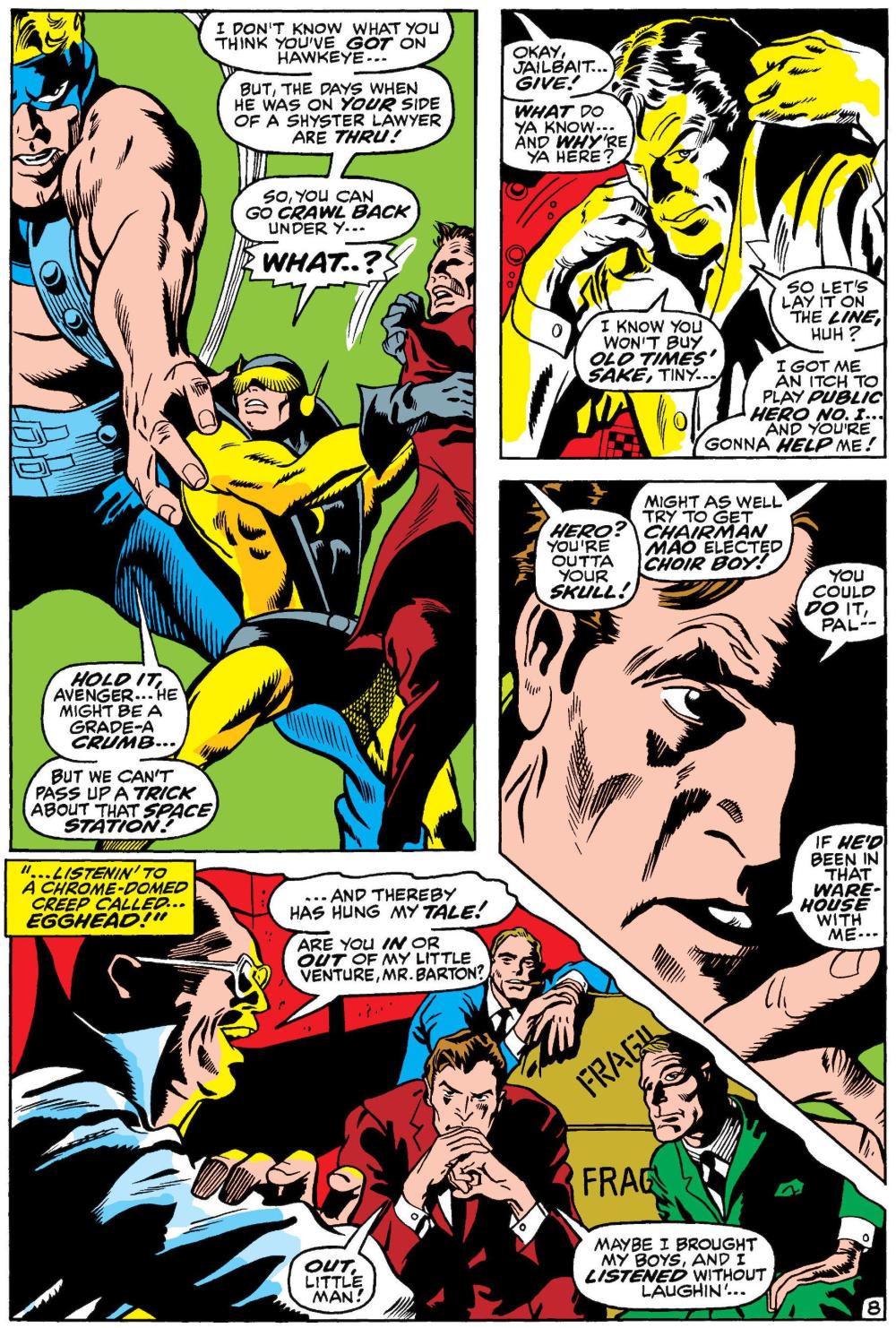 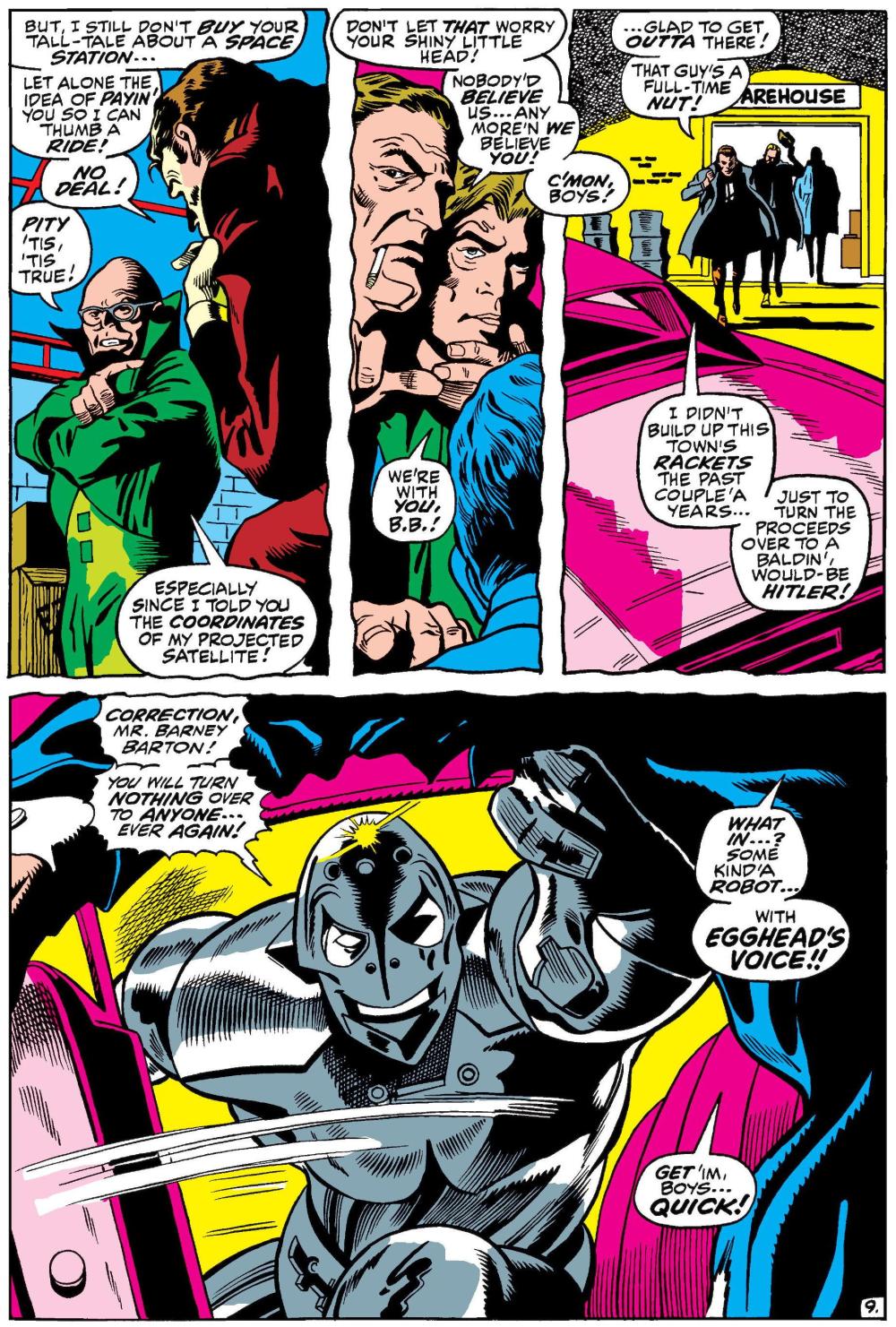 Barney Barton’s tale hinges on a plot element that, like Goliath’s careless abandonment of his archery career, didn’t bother me as a kid, but is a bit harder to swallow now; namely, that Egghead — who clearly has the considerable financial wherewithal required to build, equip, and launch a death-dealing satellite into Earth orbit — would find it necessary, or even worthwhile, to run this side angle, hitting up an ordinary (if notorious) mobster like Barton for easy money.  Oh, well — I guess even evil masterminds can run into cash flow problems, right?

As Barney goes on to explain to the Avengers, though Egghead’s robot made quick work of Barton’s “boys’, the crime boss himself managed to escape — and having done so, determined he’d better lie low for a while: 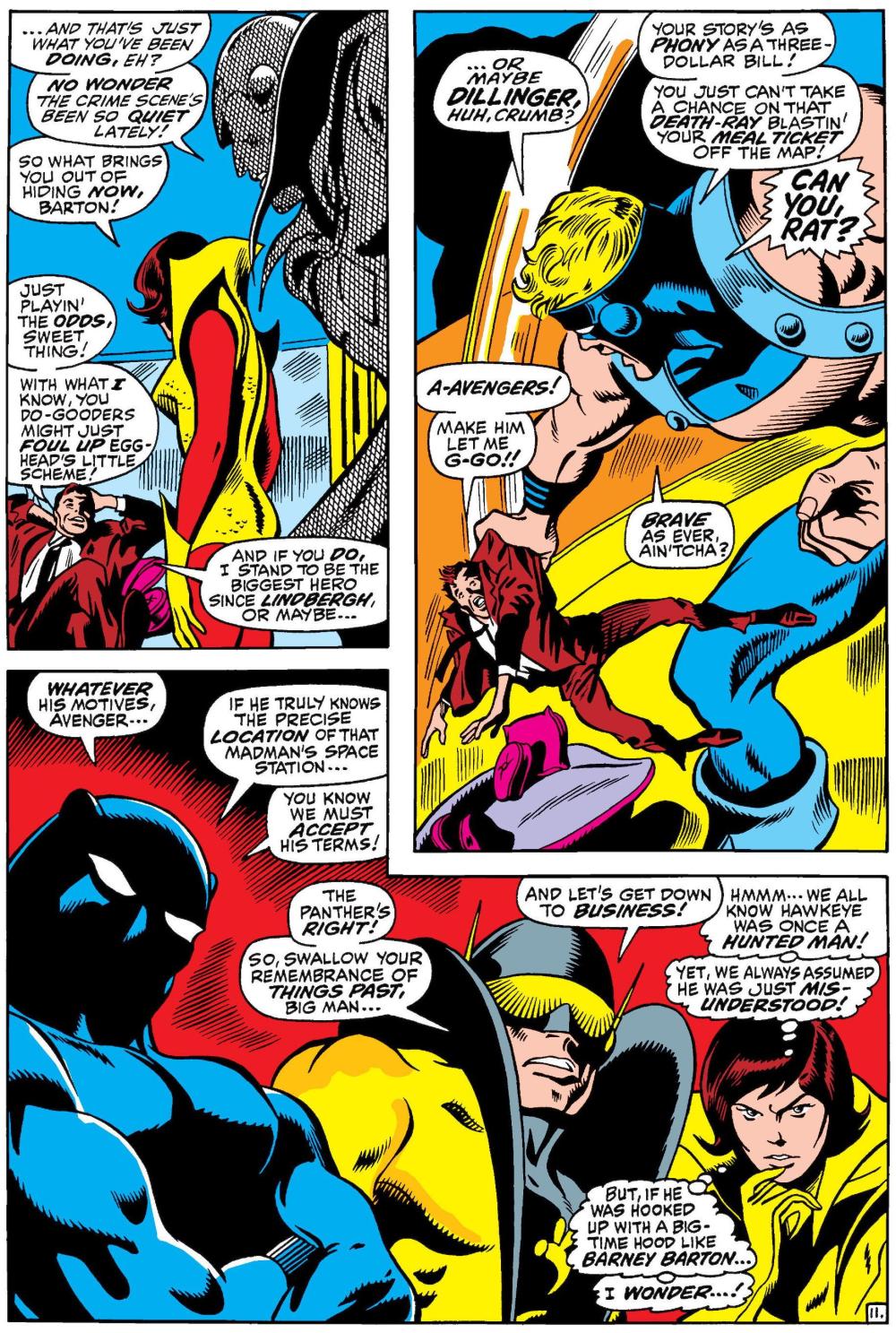 As the Wasp notes, Hawkeye had first arrived on the scene in the Marvel Universe as a “bad guy”, though a particularly conflicted and ambivalent one.  In his debut appearance in Tales of 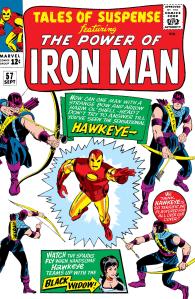 Suspense #57 (Sept., 1964), he’d originally been inspired by the popular acclaim afforded Iron Man to become a costumed crimefighter, himself — but then, a series of mishaps had led to him being wanted by the police, after which he’d fallen under the influence of Natasha Romanoff, the Black Widow (herself then acting as a Soviet spy).  Less than a year later, following several escapades in which Hawkeye and the Widow had tussled inconclusively with Iron Man, the archer had given up his life of villainy (as would the Widow, too, eventually), and joined the Avengers in the team’s 16th issue.  But his criminal past always hung over the character (as it indeed does to this day), along with the mystery of who he’d been and what he’d done before putting on a mask — a mystery compounded by the fact that he’d never been given any other name besides “Hawkeye”.*

For now, however, those mysteries remain unsolved, as the new Goliath bids a temporary farewell to his beloved Black Widow, who has to go report in to Nick Fury — and then, having received the coordinates of Egghead’s space station from Barney Barton, the Avengers blast off into space: 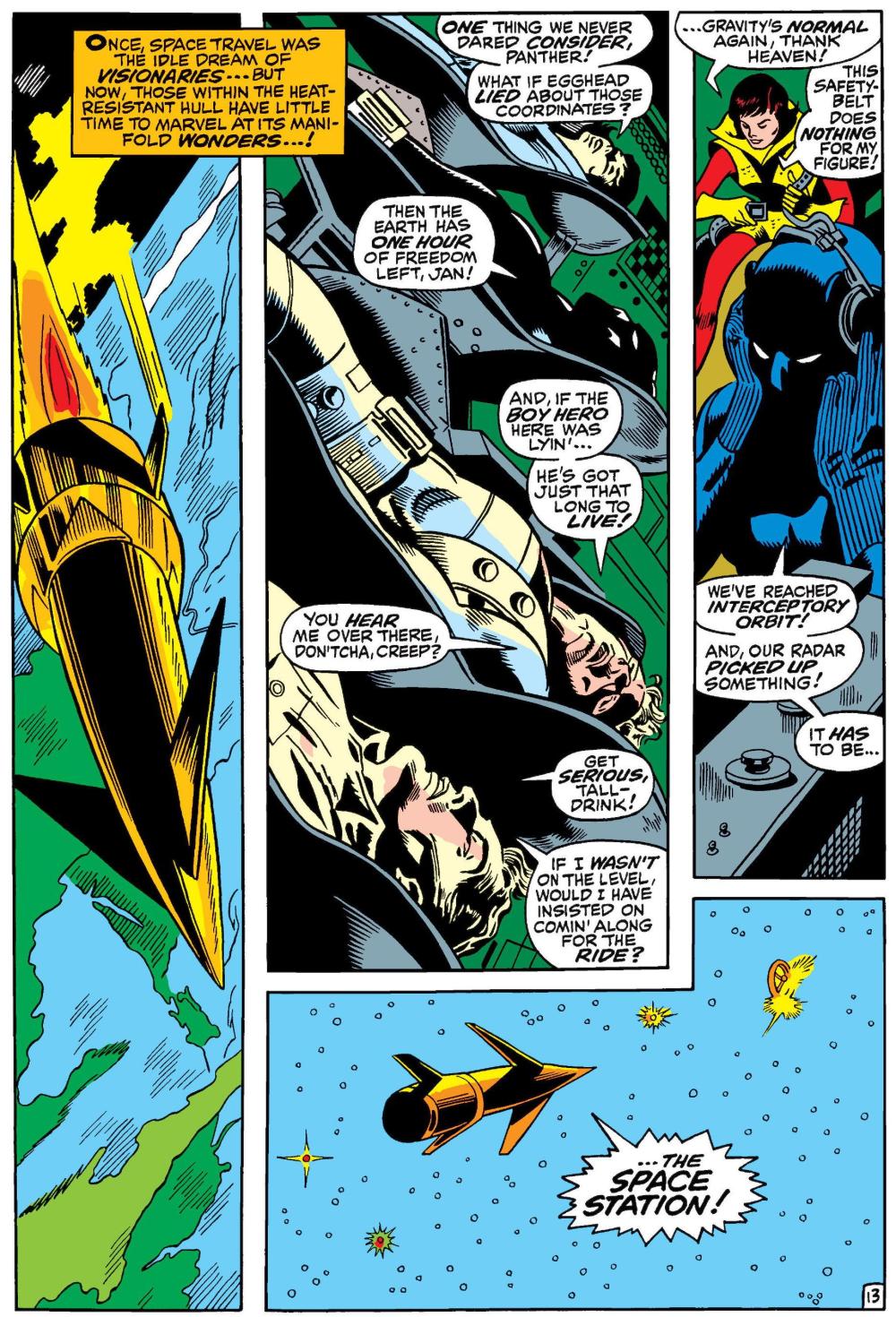 “This safety belt does nothing for my figure.”  Gee, I can’t imagine how the Wasp ever got a reputation for being flighty, can you?

Once they’re right up on top of the station, the Vision makes himself intangible; he then phases through both the hull of the Avengers’ ship and that of the space station, so that he can open the latter’s airlock and allow his comrades to dock their vessel: 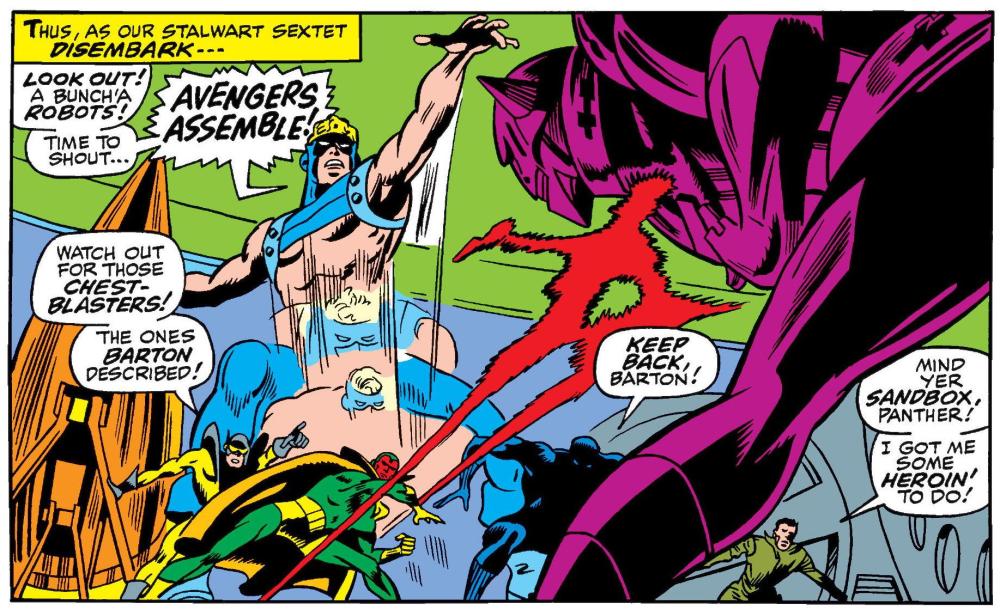 While the Avengers throw down with Egghead’s robots, the story turns to the villain himself: 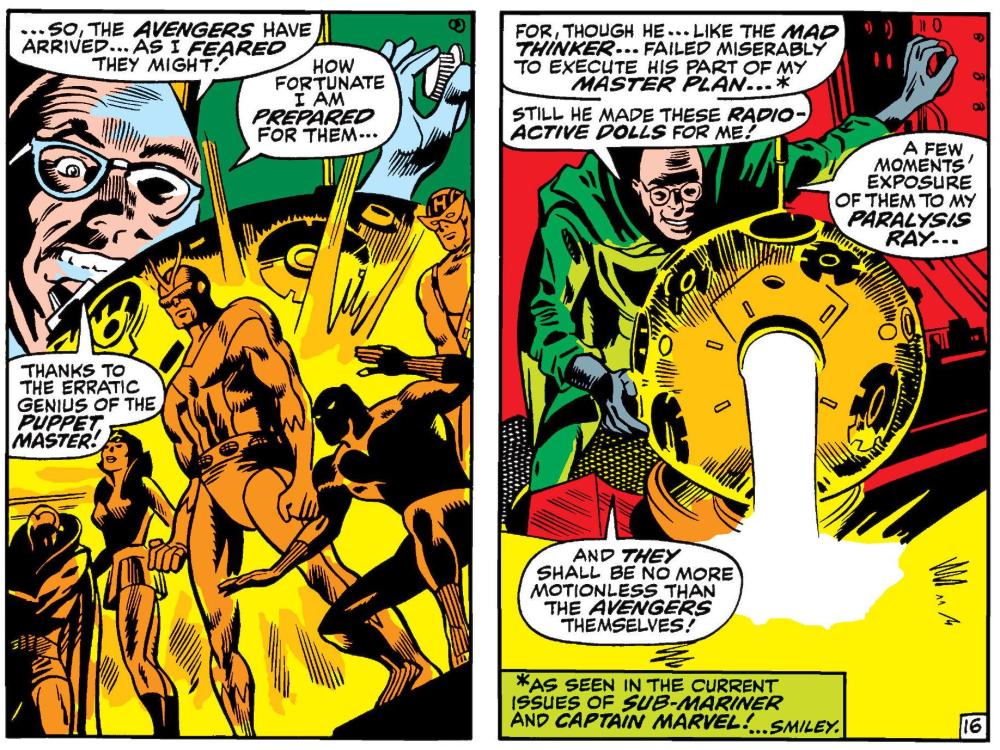 Many years later, when interviewing his former collaborator for his Alter Ego comics history magazine, Roy Thomas would opine to Gene Colan that drawing Avengers had not been “really the kind of thing you enjoy”, due to it being a team book.  Colan responded thusly:

Not really, no. There were too many characters to concentrate on, and it seemed to me to be an awful lot of work. It was hard enough just to get one character to sing out, let alone four or five, so I never appreciated those things.

Regardless of how the artist may have felt about his efforts, however, as far as at least this one old fan is concerned, he managed to make every one of the characters “sing out” — as the following double-page spread well demonstrates: 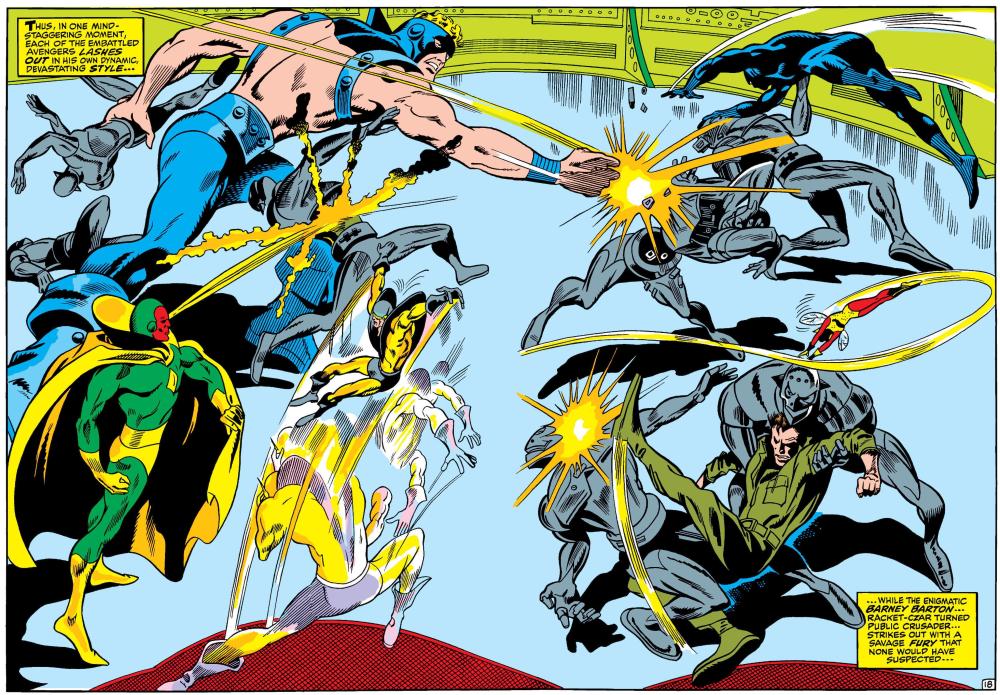 Of course, that’s our heroes’ last truly lively moment of the issue, as Egghead’s latest fiendish ploy kicks in on the very next page: 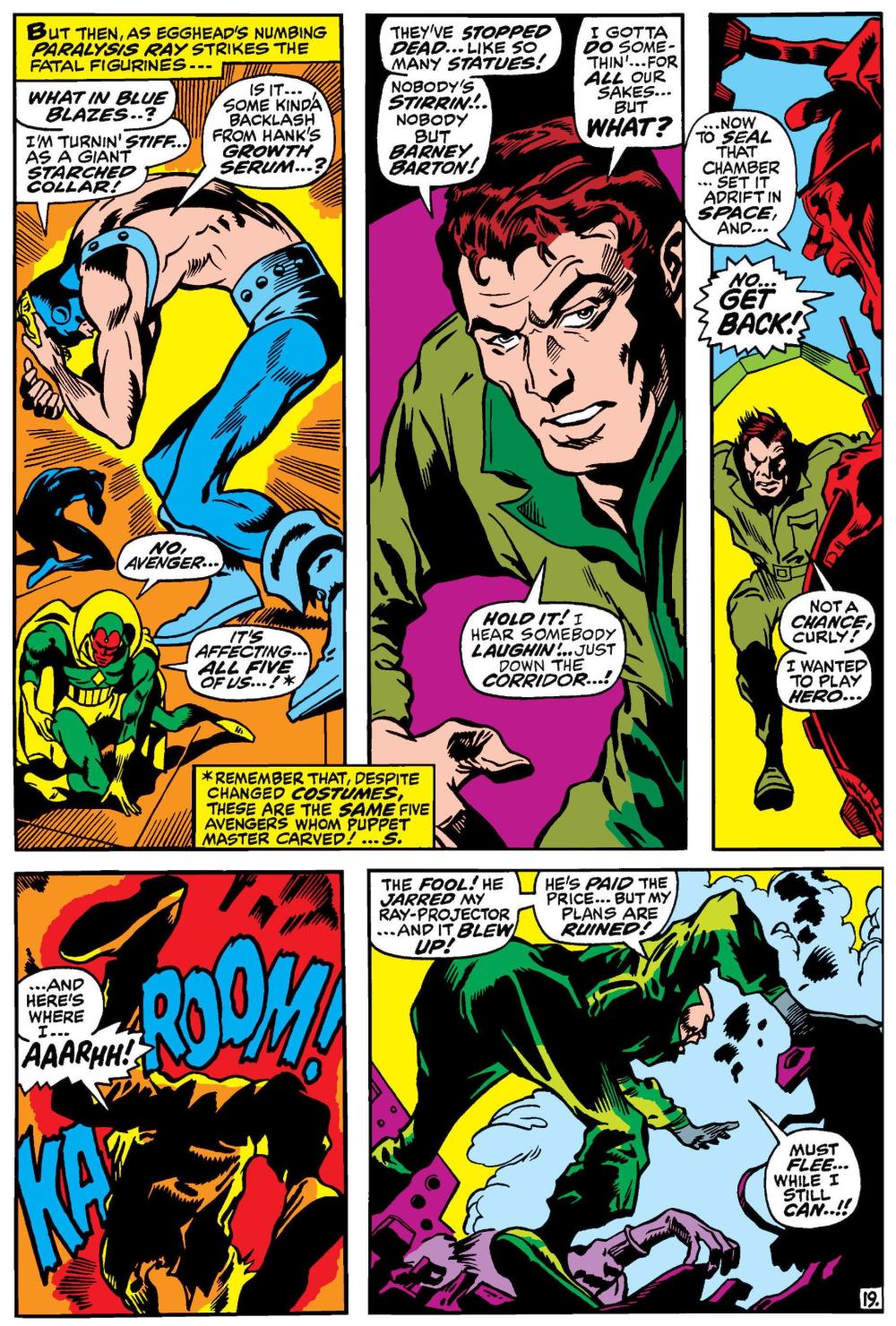 And here’s one last plot detail to make my present-day self scratch his gray head, though the eleven-year-old me almost certainly accepted it without question:  Egghead has a death-ray machine powerful enough to wipe out whole cities from orbit, but hasn’t shielded it well enough to keep it from being completely wrecked by a guy throwing himself at it?  Oh, well — I guess we’ll have to chalk it all up to overweening hubris on the villain’s part; something like that, anyway. 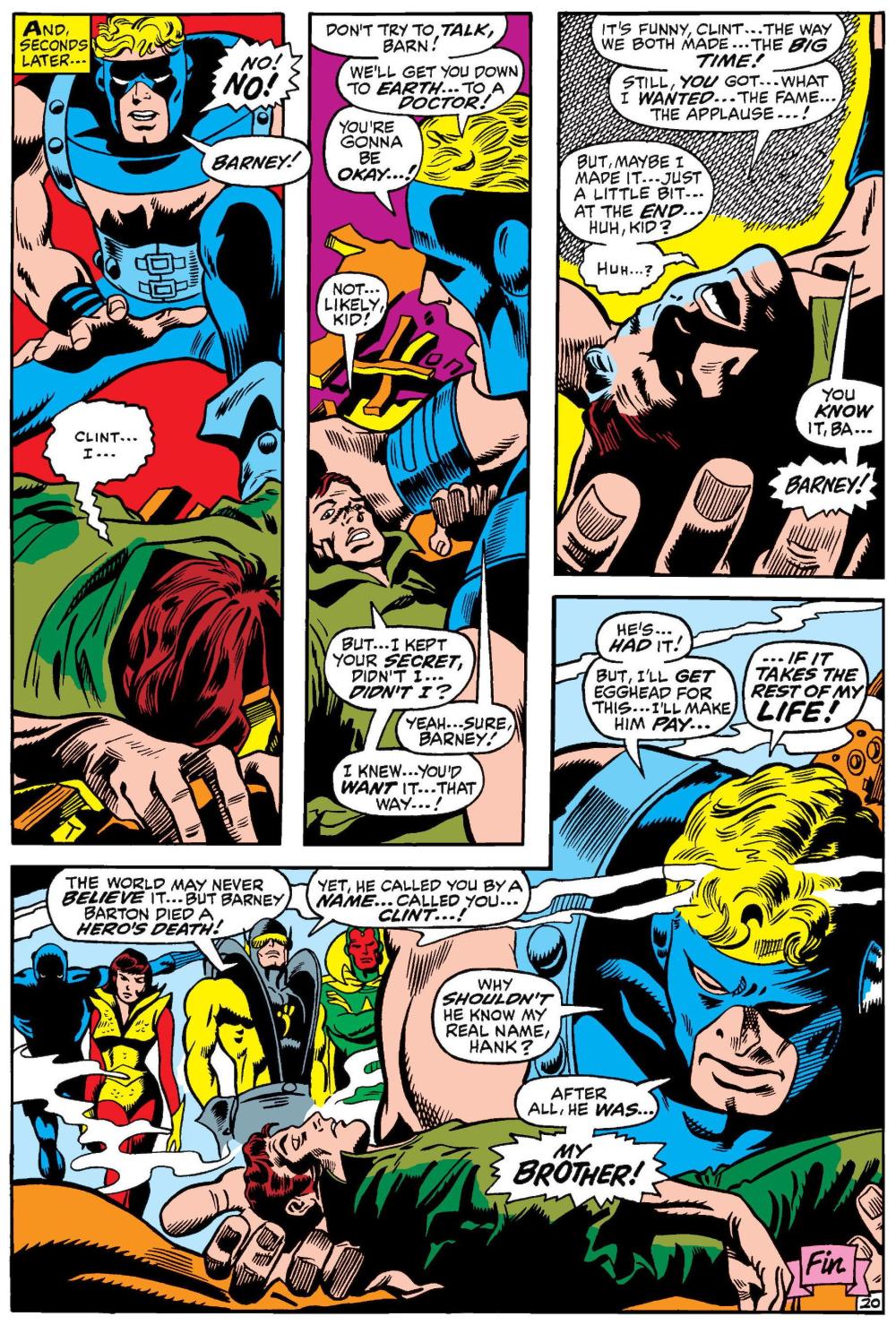 And with that last panel, the Avenger Formerly Known As Hawkeye finally gets a “real” name, as Thomas and Colan reveal that the new Goliath is in fact Barney Barton’s baby brother, Clint.**

Unfortunately, this revelation comes at the cost of Barney’s life — or, at least, it certainly appears to.  Other creators at Marvel, in later decades, would amend the circumstances of the elder Barton sibling’s redemptive sacrifice — as well as the details of his and Clint’s backstory — quite considerably.

But we’ll save that discussion for next month’s post on Avengers #65, when we’ll learn more about said backstory, as well as find out what Egghead does next — for though the oval-noggined villain’s piece of the “triangle of terror” has failed just as badly as those of his two fellow evil geniuses, he, at least, hasn’t been blown up. Yet.

*Looking back, it might seem a little ridiculous that it took Marvel almost five years to come up with a “real” name for Hawkeye  — but in the publisher’s defense, it’s not like he’s the only fictional character ever to use that moniker as a nickname. Take Natty Bumppo, for example, or Benjamin Franklin Pierce.  When you get right down to it, “Hawkeye” works OK as a name for everyday casual use among friends — a lot better than “Goliath” would, anyway.

**According to Roy Thomas’ introduction to Marvel Masterworks – The Avengers, Vol. 7, the name “Clint” was one of a couple of words that were supposedly off-limits for comic books during the era in which this story was produced, as it was felt that a bit of sloppy block lettering (or muddy printing) could easily turn it into a Bad Word.  Today, Thomas believes that he just forgot all about the traditional prohibition until it was too late to make changes.