It was the comics industry story of 1970 — and if you were a hip, well-connected fan who subscribed to Don and Maggie Thompson’s newszine Newfangles, you learned about it not all that long after the industry pros did, in March:

If, on the other hand, you were just a run-of-the-mill, solitary comics-reading twelve-year-old like yours truly, you probably had no idea that this was happening until June, when you perused the Bullpen Bulletins page that ran in all Marvel’s comics cover-dated September, 1970 (including Fantastic Four #102), and read the stunning news in Stan Lee’s “Soapbox” column:

(Of course, Lee’s announcement didn’t say anything about “the King” going to work for the Distinguished Competition — but even my unsophisticated younger self could probably work out that that was the most likely scenario.)

The thing is, for just about as long as I can recall, I’ve read the text features in my comics only after first reading the stories; so I may not have discovered this bombshell until I’d already finished reading “The Strength of the Sub-Mariner” — the last Fantastic Four story by Stan Lee and Jack Kirby*:

There are certain scenes and sequences in Kirby’s late, pre-departure Marvel work that fans and historians sometimes point to as reflective of the behind-the-scenes frustrations and anger the creator was going through at the time (indeed, there’s one such later in this very story) — but I think it’s fair to assume that few, if any readers would number this jolly opening scene among them.  Rather, it seems to illustrate a mood of liberation on the part of Kirby, who’d already made the fateful decision to jump ship prior to beginning work on this story, as described by Ronin Ro in Tales to Astonish: Jack Kirby, Stan Lee, and the American Comic Book Revolution (Bloomsbury, 2004):  “At his board, drawing the first half of The Fantastic Four No.102 with guest star Sub-Mariner, Jack felt as though a huge weight had been lifted from his shoulders.”

“…it’s good for Sue to have him with her every so often — and good for little Franklin, also!”  Yes, Reed, I think you’re probably correct in thinking that it’s beneficial for both a mother and her young child to spend time together occasionally.  And, hey, I’m just spitballing here, but maybe it would also be good for you, as a dad, to hang out with your infant son every once in a while, hmm?

When reading late-period Lee and Kirby, one sometimes gets the impression that they weren’t especially attentive to story developments in Marvel comics they didn’t themselves produce.  (For a good example, see their use of the Mad Thinker and the Puppet Master in FF #100, which completely ignored the fact that both villains had recently been blown up real good in an Avengers/Captain Marvel/Sub-Mariner crossover storyline.)  But that’s certainly not the case here, as the Sub-Mariner’s discovery of Magneto in the ruins of his Savage Land laboratory picks up directly from where readers had last seen the malevolent Master of Magnetism (i.e., getting blown up real good at the conclusion of Roy Thomas and Neal Adams’ X-Men #63 [Dec., 1969]).

Namor takes the unconscious Magneto back to Atlantis, and the story shifts scenes back to New York, some indeterminate time later, where we see some odd stuff is going on: 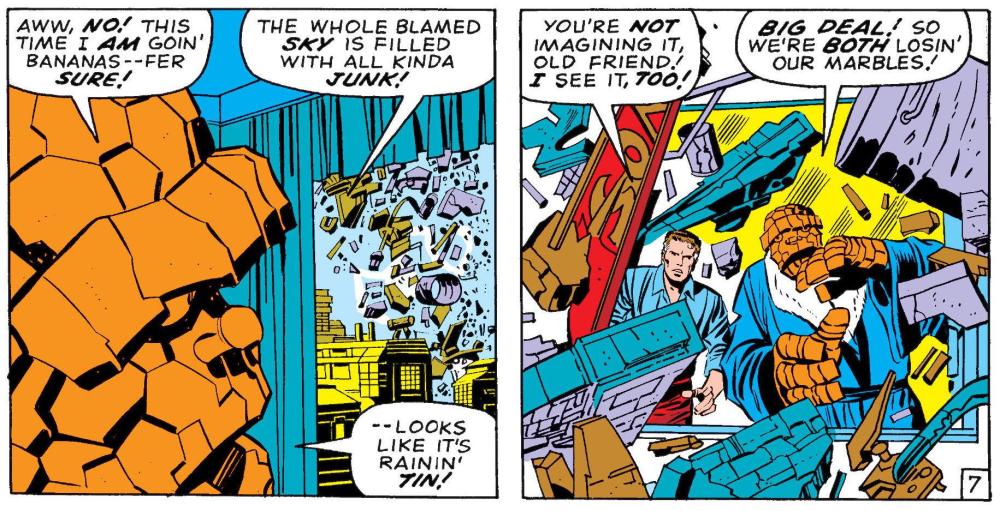 Geez, a whole bunch of metal (and partly-metal) junk whirling around in the sky — you’d almost think someone was doing weird stuff with magnetism, wouldn’t you?

Jack Kirby hadn’t created Marvel’s version of Atlantis, of course, any more than he had the Sub-Mariner, and by 1970, more than a few fine comics artists had taken a shot at depicting Namor’s undersea kingdom.  Still, no one ever made the place seem more impressive than the King — especially when his pencils were graced by the polished inking of Joe Sinnott.  (It’s so impressive, in fact, that you might not even notice that Magneto is strolling around underwater with no sign of any special breathing apparatus — a state of affairs that continues throughout the rest of the issue.  One must assume that he’s been given something along the lines of the 24-hour water-breathing tablet administered to Bruce Banner in Hulk #118 [Aug., 1969], but it would have been nice if Stan Lee’s script had said so.) 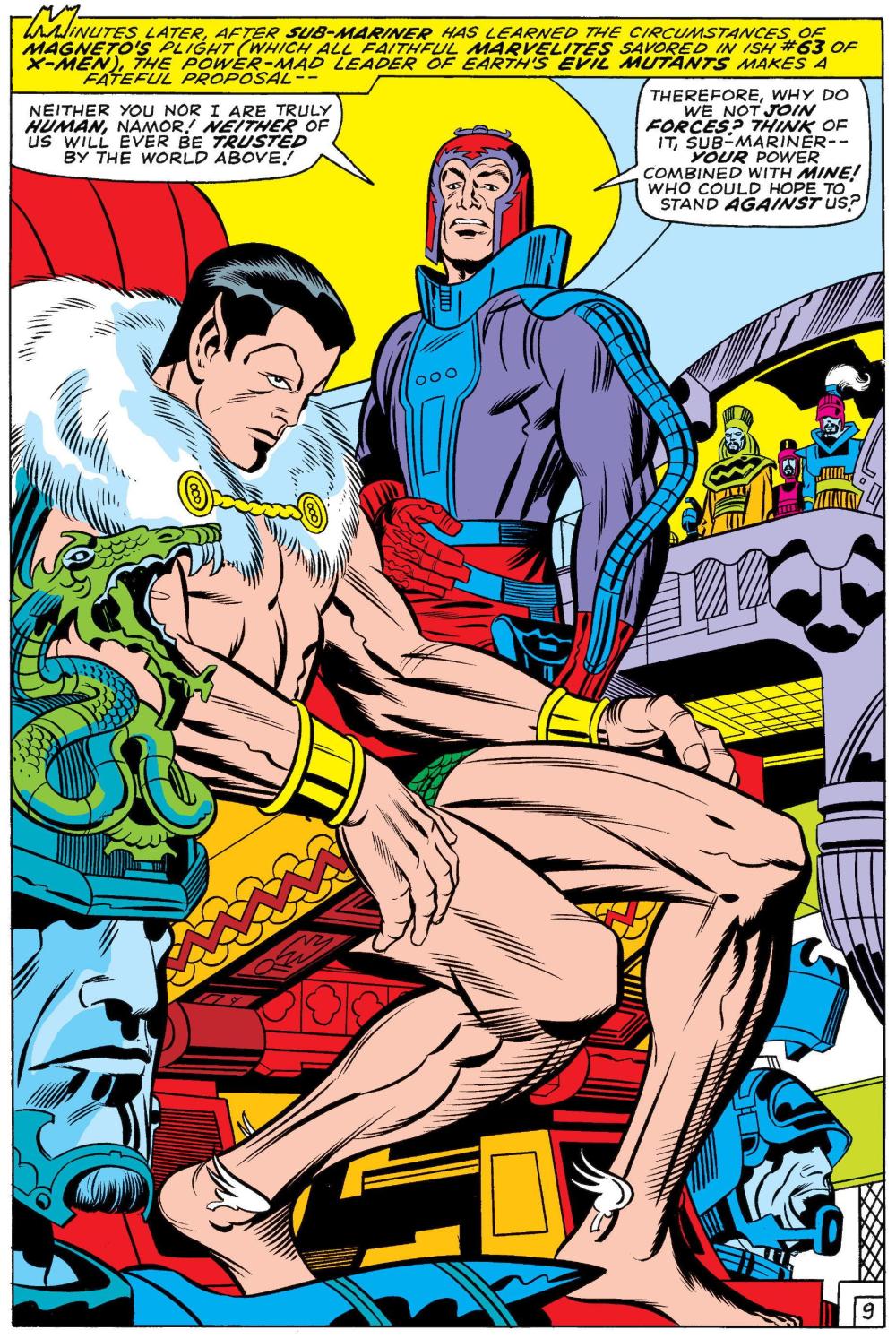 Outside of the odd flashback, cover, or pin-up image here and there, Kirby hadn’t drawn Magneto since X-Men #17 (Feb., 1966), or Namor since Tales to Astonish #83 (Sept., 1966).  So it’s a treat to see him return to these characters one more time, before leaving Marvel — and that’s especially true as regards page 9, which features the last full-page splash panel that Kirby would produce for Fantastic Four.

Back in New York, Mister Fantastic has been hard at work on the “flying junk” mystery:

The FF’s rebellious equipment gives the team a hard time, until Crystal lets loose with a blast of her elemental power:

The storytelling here and on the next several pages is confusing.  On page 10, Reed explained that he was “sending forth a sonic probe, which will tell us what we have to know!”  That sounded pretty benign; but the “sonic wave” that strikes Atlantis on page 14 is anything but:

It’s hard to believe that Reed Richards wouldn’t know that his “probe” could have such devastating, life-threatening effects.  Meanwhile, the “concussion missile” that the Thing has impetuously launched, and which Reed seems to be a good bit more worried about, is, according to Magneto on the very next page, “harmless”.

I’m inclined to think that something important was lost between the stages of Kirby’s drawing/plotting and Lee’s scripting, and that the original idea was for the destructive shock wave to have been caused, or at least made much worse, by Magneto. 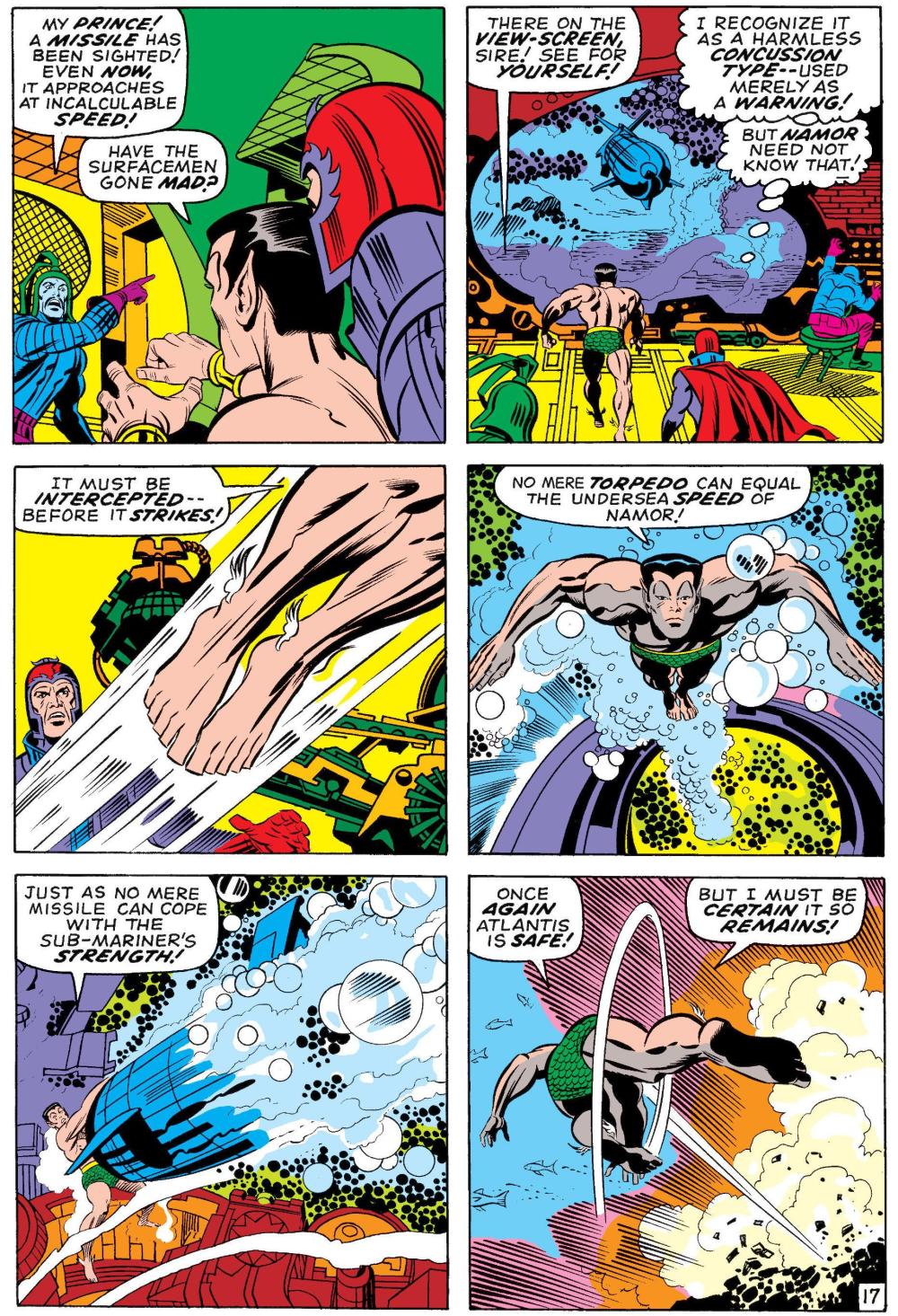 It’s interesting that in this story, Magneto seems to consider the blue-skinned, water-breathing Atlanteans to be members of “the human race”, every bit as much as he does surface dwellers, such as the residents of New York City — and thus, in his view, natural enemies of his own race of “mutantkind”.  (In later years, of course, Marvel’s creators would make much of the idea that the half homo mermanus, half homo sapiens Namor is, himself, a mutant.) 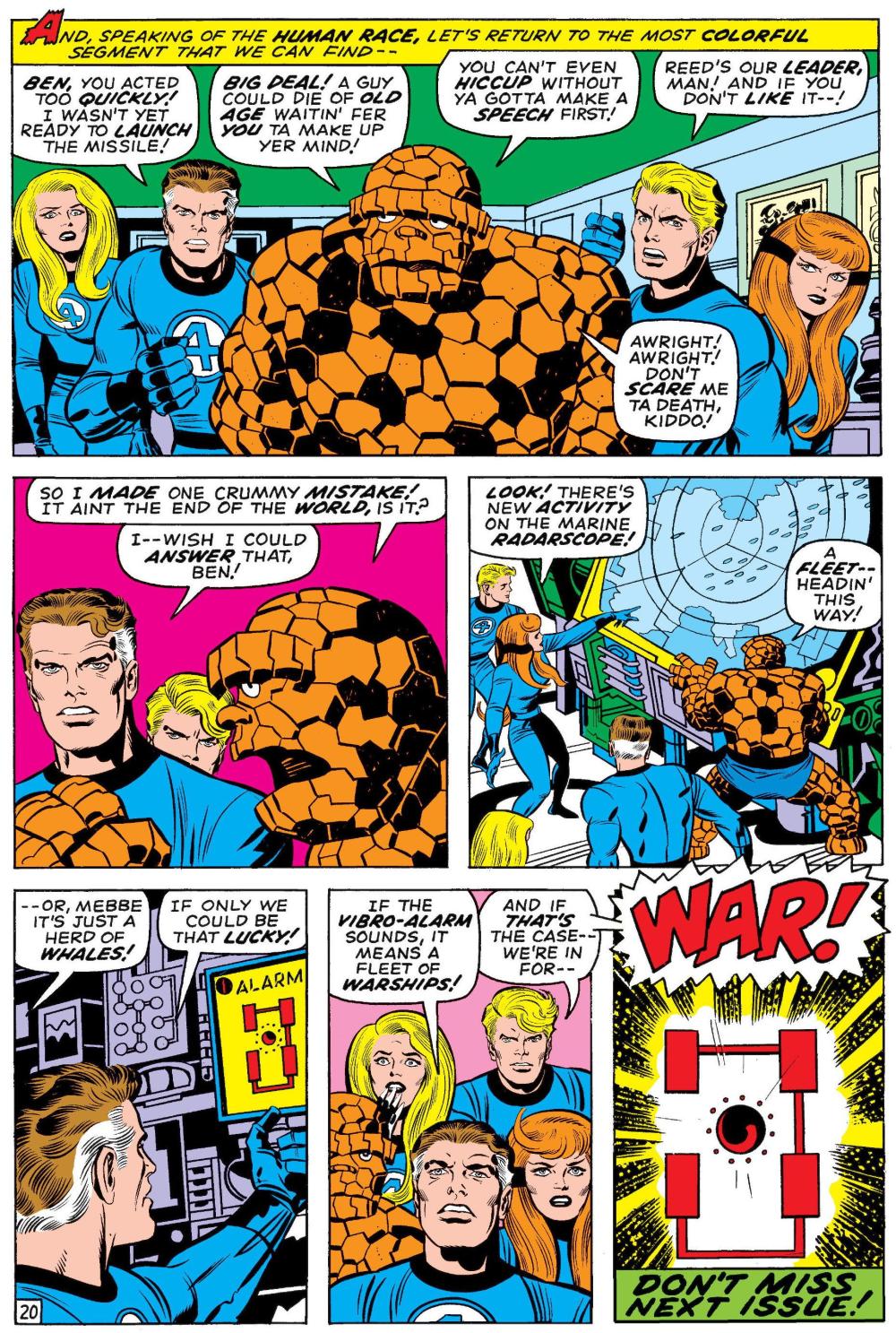 “War!”  You’ll recall that I mentioned earlier that there was one of those scenes deemed by many to be reflective of Kirby’s pent-up frustration later on in this issue; well, this is it.  Of course, it’s difficult to imagine how else this issue could have ended; but even if that last dramatic panel wasn’t intended by Kirby as a “declaration of war” against Marvel Comics, it can’t help but be fraught with symbolic weight, serving as it does as the final panel of Kirby and Lee’s 108-issue run** on Fantastic Four — an important occasion marked (if only obliquely) not with a whimper, but with a bang.

The story published in FF #102 was originally supposed to be published in the 103rd issue.  Kirby had in fact plotted and drawn an entirely different tale for #102, which Lee ended up pulling, extensively reworking, and eventually publishing (with additional art by John Buscema and John Romita) that December, as Fantastic Four #108.  (And, yes, we will have some things to say about that issue, come December, 2020).  But this is the story that Kirby delivered to Marvel as his final FF job; the one whose pages had just arrived in the mail when Lee got that fateful March 6 phone call from his longtime collaborator.

According to most accounts of that day, once the news got out, the mood around the Marvel offices ranged from depressed, to desperate, to determined.  Artist John Romita felt certain that they’d have to cancel Fantastic Four, at the least, and said as much to Lee:

I went to Stan Lee and asked him if they were going to drop the book, and he said, “You’re going to do it.”  I said, “Are you crazy?  I just told you I would drop the book.” (laughs)  He asked me to do it and I did it under extreme duress because I felt inadequate. I felt anybody who tried it would be inadequate. It was like trying to raise somebody else’s child.  (From The Jack Kirby Collector #33 [Nov., 2001].)

John Romita’s assignment to raise Jack Kirby’s child would commence almost immediately, as the last set of pencilled pages Kirby had sent in didn’t include a cover (as was Marvel’s common practice at the time) — and thus, the cover for Fantastic Four #102 would be pencilled by Romita, with inks by John Verpoorten.  With the very next issue, those two gentlemen would move on to producing the interior as well as the cover art.

How’d they do?  Come back next month, and we’ll all take a look.

*This is even more likely to be the case if FF #102 was the first Marvel comic I bought that month, as its probable publication date of June 9 (according to Mike’s Amazing World) would indicate. (The only other Marvels I bought published in June, 1970, were Amazing Adventures #2, with an approximate release date of June 16, and Silver Surfer #18, believed to have gone on sale June 23.)