In August, 1970, when DC Comics released Jimmy Olsen #133 — the first new comic book produced for the publisher by Jack Kirby to make it to print — they marked the occasion with a “Kirby Is Here!” banner headline (a consummation of the “Kirby Is Coming!” promotional campaign they’d been running the last couple of months), topping a cover drawn (mostly) by Kirby himself.

Two months later, when the publisher brought out their second Kirby comic, they continued to use his name as a selling point, with the cover’s banner headline now proclaiming “A King-Size Kirby Blockbuster!”  (“King-Sized” was in fact not an entirely accurate description, since both the physical comic itself and the featured story within were of standard length; perhaps DC was trying to evoke the “King” nickname that Kirby had acquired at his former employer, Marvel Comics.)  But the cover illustration itself wasn’t by Kirby, this time; rather, it was the work of Neal Adams.

Having a different artist than the one responsible for the interior art handle the cover was hardly an unusual practice for DC in this era, of course.  But it’s still rather odd, at least in retrospect, to see the company attempting to sell the book on the basis of Kirby’s name, while not even featuring his art on the cover.  It may be a sign of a certain ambivalence on DC’s part regarding their new star creator, as discussed in our issue #133 post back in August.  Or maybe it’s just that DC had rarely (if ever) tried to use a creator’s popularity as a marketing tool prior to this, and they were figuring things out as they went.

In any event, once you get past #134’s cover, the book’s all Kirby.  Well, Kirby and inker Vince Colletta.  Oh, and Al Plastino, who redrew most of the Jimmy Olsen and Superman faces throughout the book, uncredited (another sign of that aforementioned ambivalence on DC’s part).  And, of course, letterer John Costanza, also uncredited, as was DC’s policy at the time.  And, OK, sure, the unfortunately unknown (as well as uncredited) craftsperson who handled the coloring.  But other than all that, it’s 100% Jack Kirby! 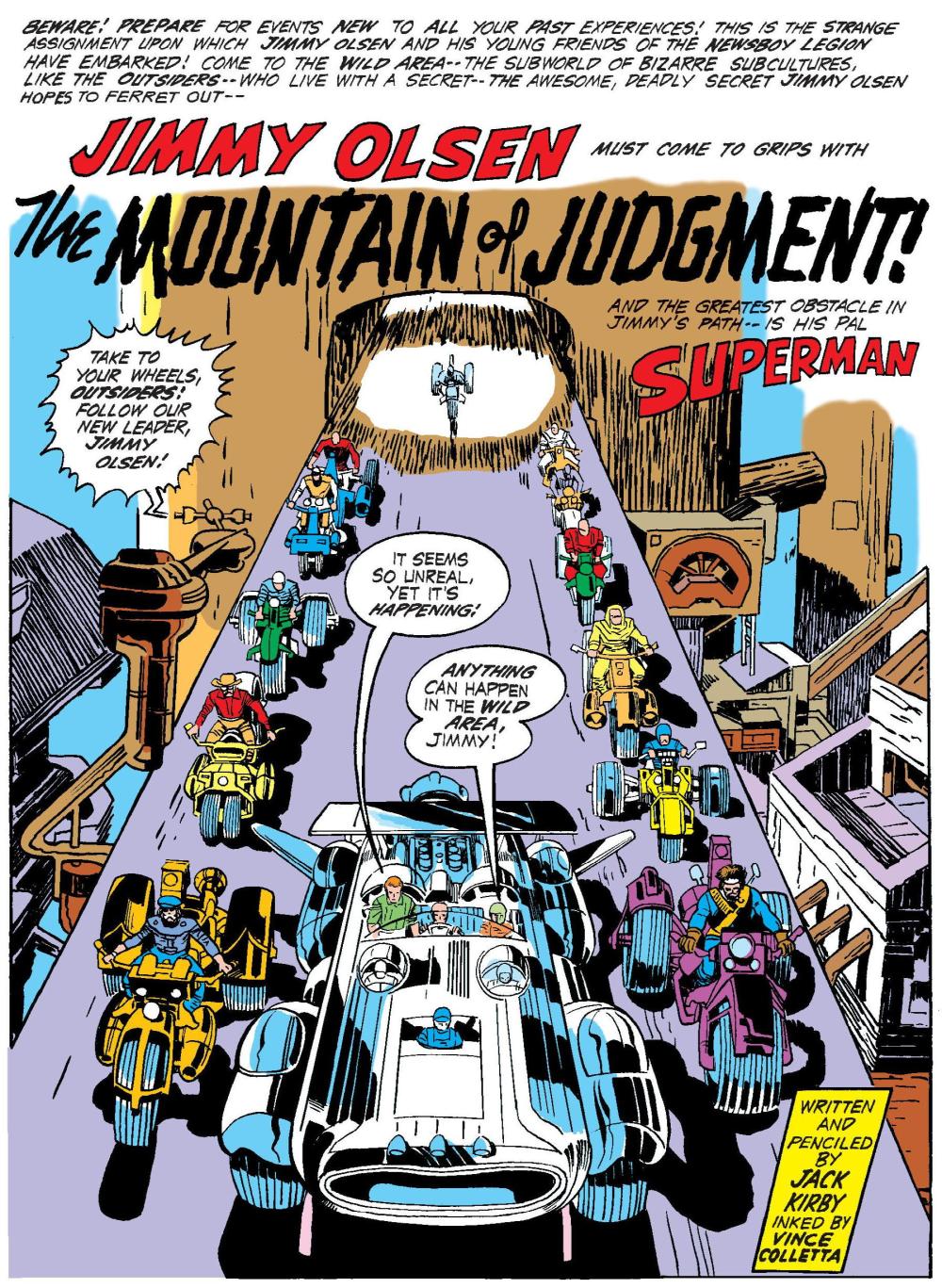 Jimmy and his new friends, the new Newsboy Legion, have been sent by Morgan Edge — the head of the Galaxy Broadcasting System, and brand-new owner of the Daily Planet newspaper — to get the scoop on the mysterious Wild Area; and as part of their assignment, they’re capturing their experiences on television camera, and sending the signal straight to the office of the mysterious Mr. Edge: 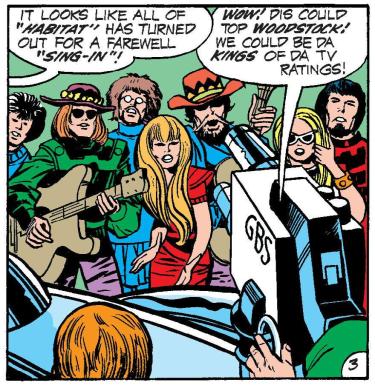 In Jimmy Olsen #133, the Man of Steel didn’t seem to have any more idea what was going on in the Wild Area than Jim and the Newsboys did; his motivation to follow and intercept them there appeared to stem entirely from his suspicions about Morgan Edge.  Here, however, Superman intimates that he knows things that the boys don’t; as the story progresses, we’ll see that his knowledge is indeed quite extensive, suggesting that Kirby was figuring out this part of his story as he went along. 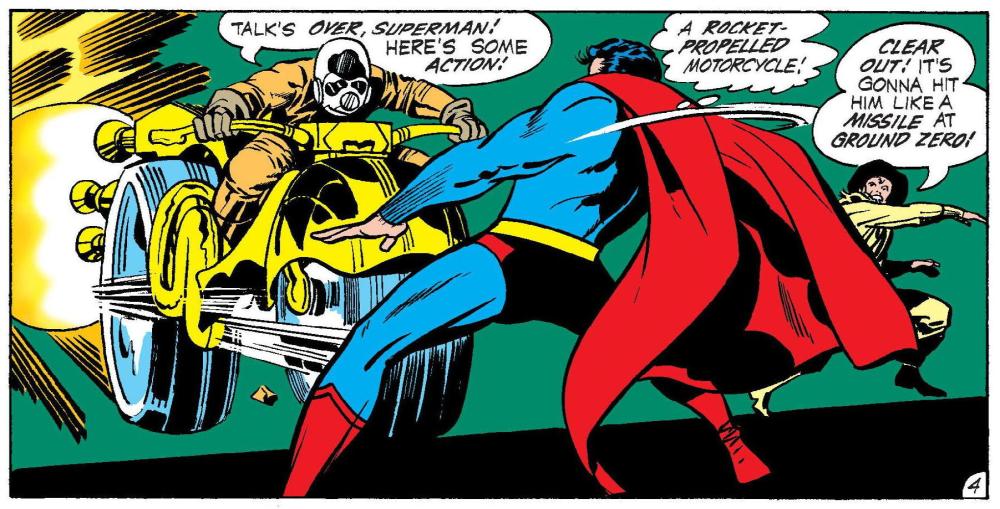 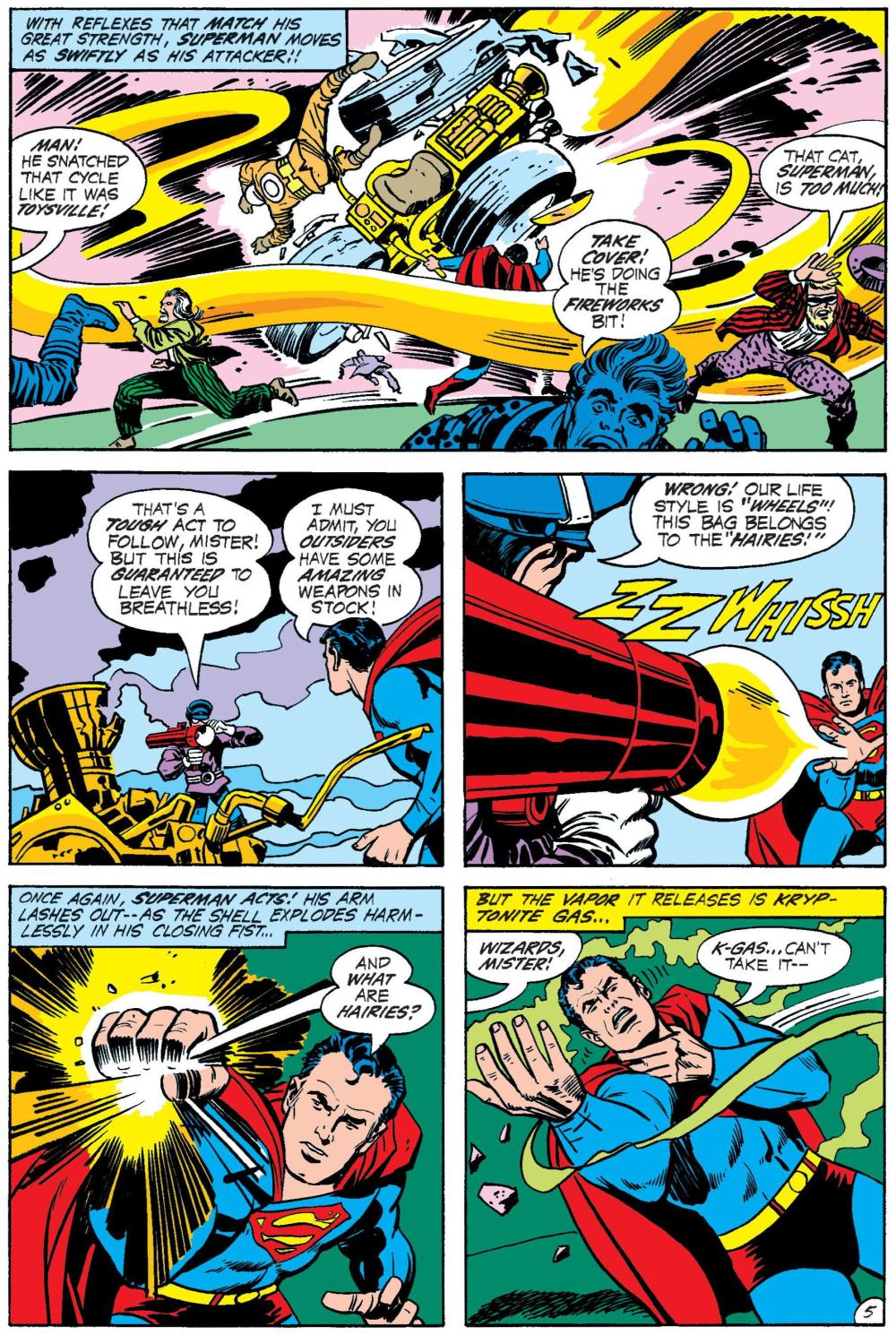 As with the previous issue, #134’s cover’s depiction of an instance where “Superman’s Pal” has apparently turned against him — a familiar trope for Jimmy Olsen prior to Kirby’s arrival, but one which usually had some other explanation than any genuine conflict between the two friends — turns out to be a pretty accurate representation of what actually happens in the book. 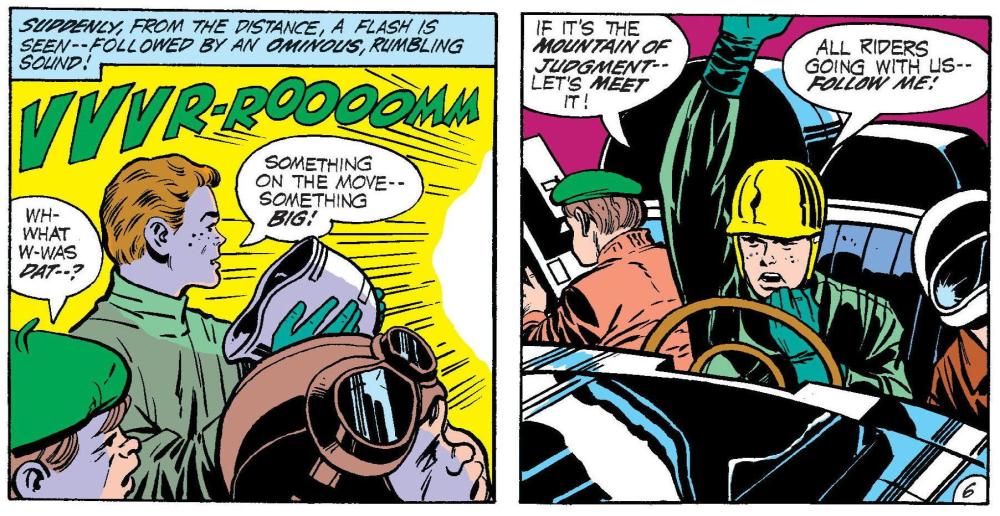 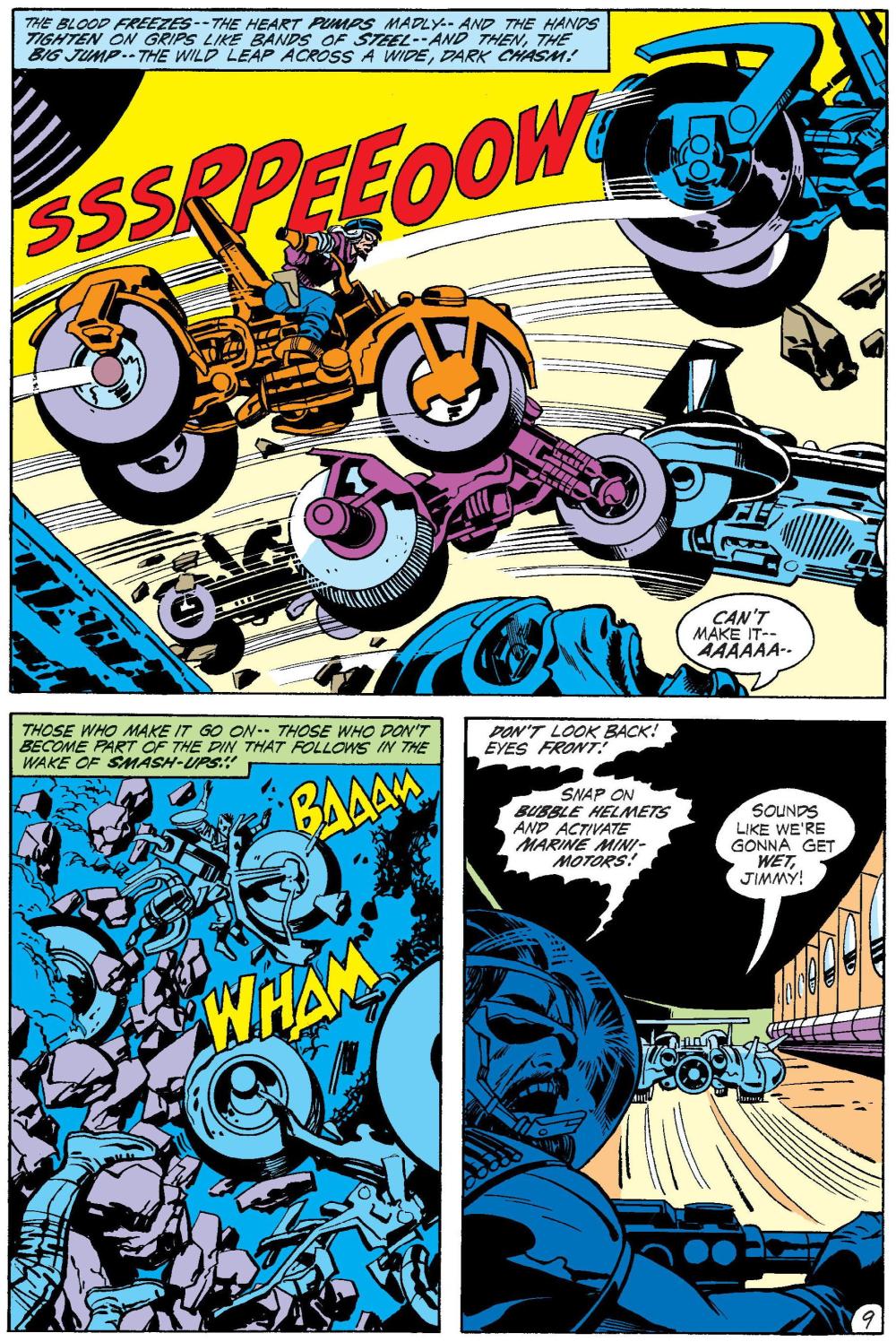 You might have read that last page and thought, “Wow, those Outsiders just crashed and died, and Jimmy just kept driving!  Cold, dude!”  But, as we’ll discover in a few pages, the “smash-ups” we just witnessed weren’t quite as fatal as they looked. 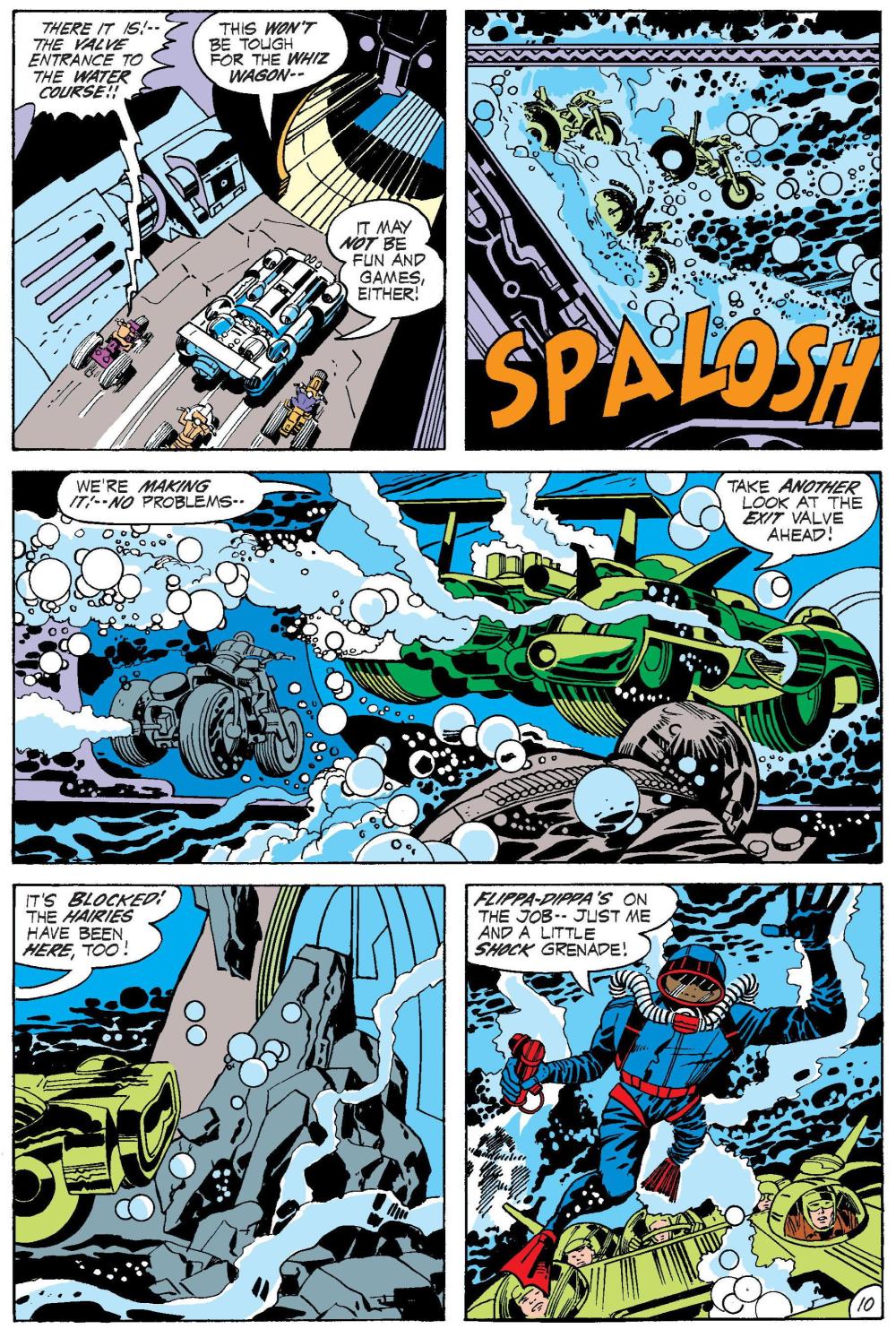 From here, the Whiz Wagon skids right into a series of Kirby Kollages — the artist’s first for DC.  (The Outsiders, on the other hand, end up who knows where; we won’t see them again this issue.) 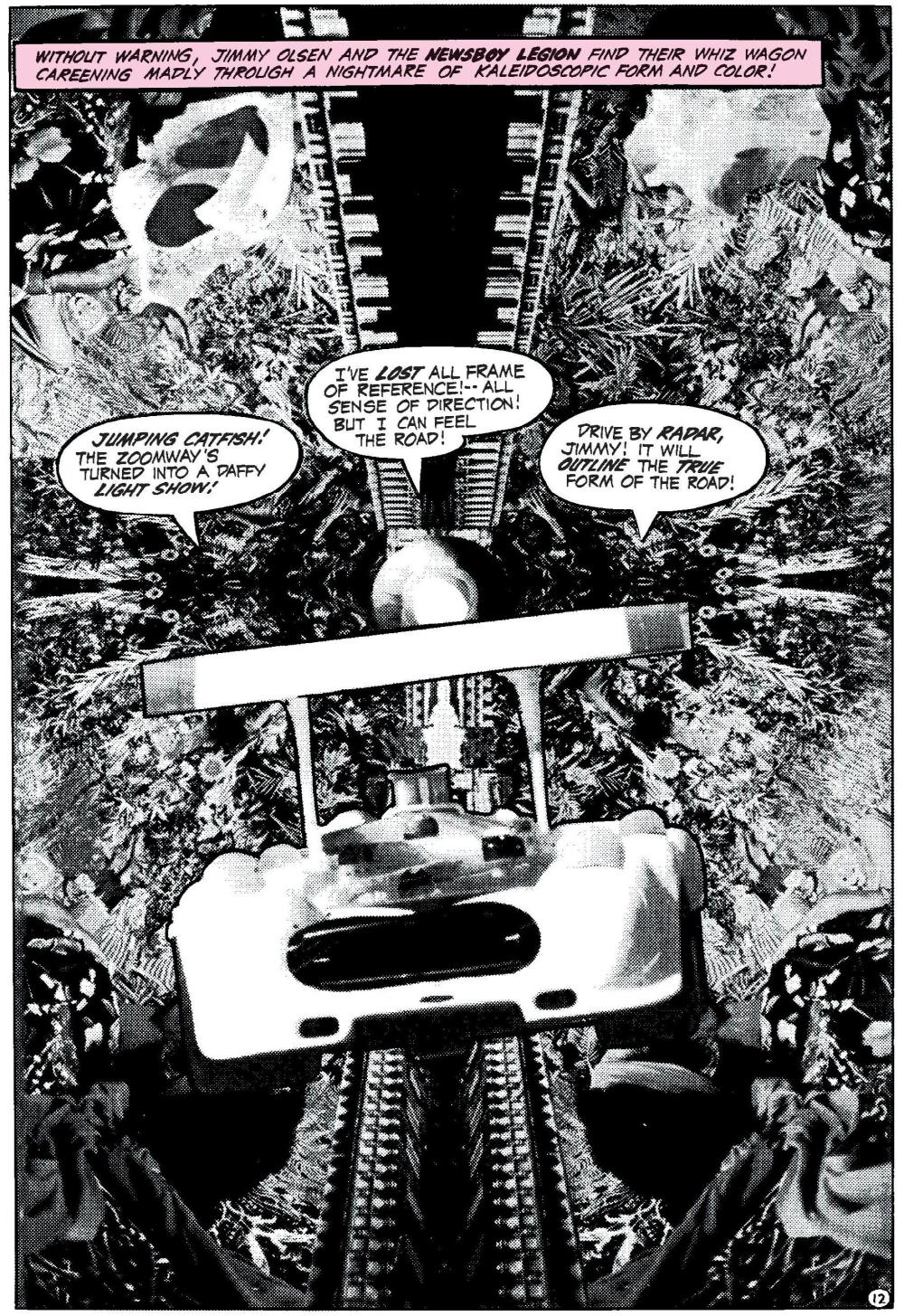 We’ll have a special Kollage-related bonus later in the post — but for now, let’s keep the story rolling as we check back in on Superman:

As soon as his young attendants are out of his room, the Metropolis Marvel is out of bed, out the window, and on the trail of Jimmy and co.:

See?  I told you nobody died back there on page 9.

While I don’t actually recall my thirteen-year-old self’s initial reaction to the preceding double-page spread, I’m pretty certain that the revealed Mountain of Judgment wasn’t quite what I’d been expecting.  I’m also fairly confident that I wasn’t the least bit disappointed. 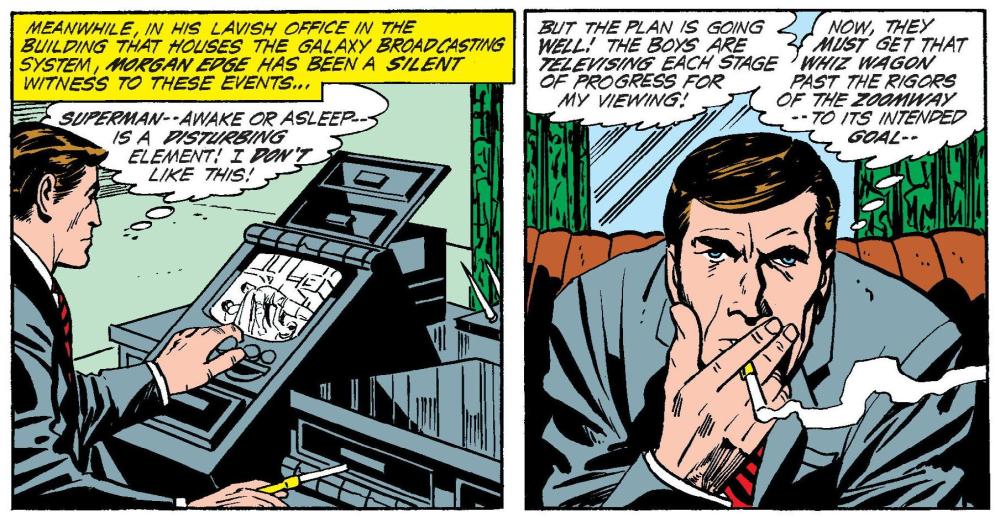 As this scene progresses, we see the malevolent Morgan Edge muse over the coincidence of Superman getting involved in this affair immediately after Edge had attempted to have “snooping Clark Kent” murdered.  “Kent — Superman — hmmmmm.”  Pretty ominous, huh?  And then, it’s back to the action: 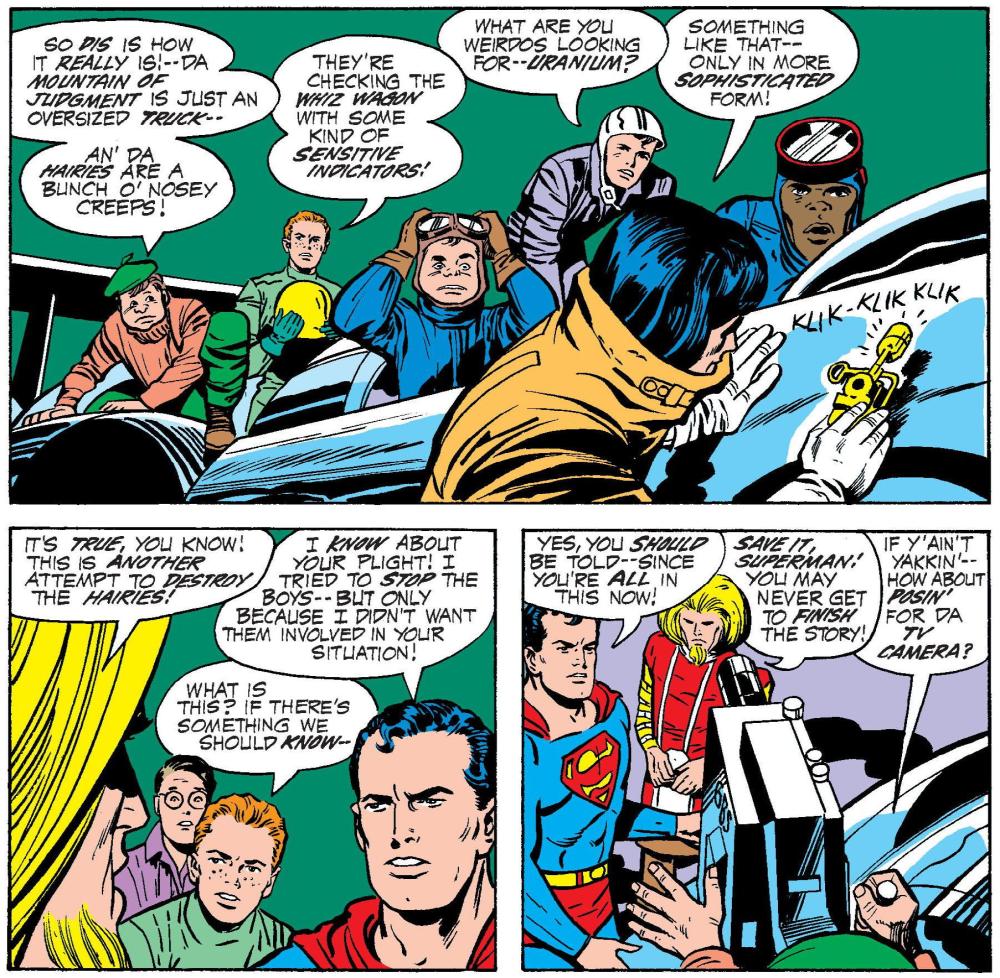 As you’ll recall, back on page 5 Superman appeared to be completely ignorant regarding the Hairies.  Since he’s now revealed that he actually knows quite a bit about them, his earlier cluelessness is probably best interpreted as an attempt to fake-out the Outsiders; though whether Kirby actually meant it as such, or, as previously suggested, it’s an example of his working out the extent of Supes’ Wild Area knowledge on the fly, is something we’ll probably never know.

In the veritable nick of time, the Hairies’ investigator finally locates what he’s looking for — a bomb that’s been planted in the Newsboy Legion’s television camera:

With Jimmy and the Newsboys’ expression of solicitude towards the Man of Steel — and his exasperated but essentially good-natured response — the Superman-Olsen conflict angle in the storyline pretty much comes to an end.  Next issue, the dramatic “Ex” will have vanished from the logo, as Jimmy Olsen is once more billed as Superman’s Pal™. 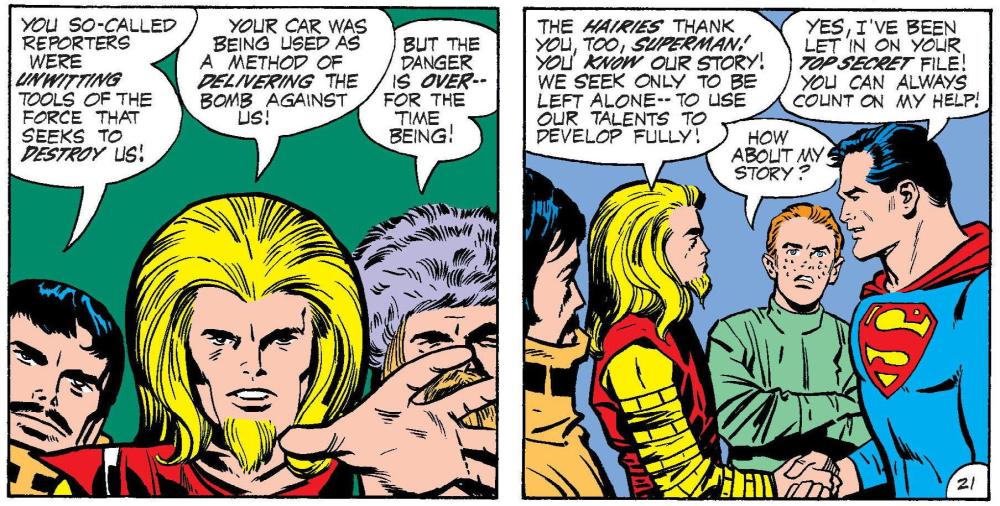 The Hairies represent Kirby’s strongest statement yet of his optimism regarding the idealistic, iconoclastic youth counterculture of this era — though they’d would be overshadowed in fairly short order by the advent of the Forever People in December.

And here he is, folks!  One of the greatest villains ever created for the medium of comic books, making his rather modest debut in the next to last panel of this story’s final page.  And not looking quite “himself”, if we’re going to be completely honest.

If you’ve only ever seen this story before in reprint or digital editions, in which the coloring has been “corrected”, you may be surprised to discover here that Darkseid, in his first published appearance, looked like a Caucasian human male.  As inked by Vince Colletta, the countenance of Ole Stone Face wasn’t even all that craggy; ugly, sure, but no more so than many another human Kirby villain.

Kirby already knew what Darkseid was supposed to look like, obviously — we have the early concept art he used to help sell DC on his “Fourth World” project (shown at right) as proof of that.  And, indeed, the Lord of Apokolips would start looking a lot more like the cosmic alien baddie we know and loathe as early as his very next appearance, in Jimmy Olsen #135.  Still, it’s interesting to contemplate how little the people the King was working with at DC — especially Colletta, and the anonymous colorist — knew about even the most important figures in his just-a’borning magnum opus at this late stage of the fame. 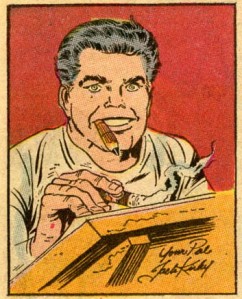 Especially since DC already had the first issues of Kirby’s three new titles in production.  Kirby had in fact written and drawn those books before starting work on his first Jimmy Olsen; it was DC’s decision that saw the creator’s first three Olsen issues published before any of his new series made their debut.  And by October, they were all far enough along in the production cycle for their covers to be used in a house ad DC ran in their comics shipping that month.

And so, via a two-page spread in Jimmy Olsen #134, on the facing page from a Kirby-penned essay, “The Whiz Wagons Are Coming!” (which was accompanied by the self-portrait shown at left), many readers would get their very first look at the primary protagonists of this new “Epic For Our Times”:

Note that there’s nothing in that full-page ad to suggest that Forever People and Mister Miracle, as well as New Gods, will all be part of the same “Epic” — or, indeed, that they’ll have any connection at all (besides them all being produced by Kirby, of course).  Nor is there a hint that all three books will tie into the “vast, ominous intrigue” associated with Darkseid in Jimmy Olsen, as mentioned on the last page of “The Mountain of Judgment!”.

But that piece of information was hardly necessary to sell my thirteen-year-old self on picking up those issues as soon as I saw them, let alone the next issue of Jimmy Olsen.  The incredible level of invention and imagination in Kirby’s first two Olsens, with the promise of so much more to come, had already done the job.

Of course, by the time January, 1971 rolled around — and we fans had learned that all four of Kirby’s DC series would comprise a single, interconnected, ongoing storyline — the excitement was pretty well off the charts.

Well, mine was, anyway.  I look forward to sharing with you what it was like to see the Fourth World unfold in real time, in the months and years to come.

Before we wrap this one up, here’s the “Kirby Kollage” bonus I promised you earlier — color reproductions of the original art for two of this issue’s collages.  (I’d love to show you the third, as well, but to the best of my knowledge, that one hasn’t surfaced.) 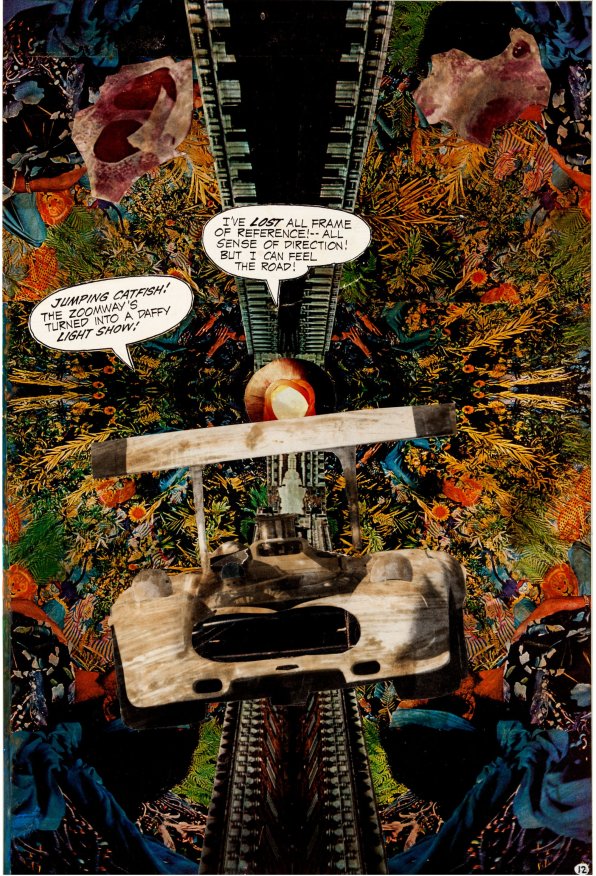