The Black Racer is undoubtedly one of the most enigmatic and ambivalent characters who ever appears within the pages of Jack Kirby’s Fourth World comics.  Somewhat ironically, however, his creator appears not to have originally intended him to be part of the sprawling cosmic epic that ran through his DC titles in the early 1970s.  According to Mark Evanier, who was working as an assistant to Kirby during that period:

At the time, it was intended as a stand-alone series, utterly unconnected to the NEW GODS, FOREVER PEOPLE or MISTER MIRACLE series, and what Jack wanted to do was to hold a big talent hunt to find a young black writer and a young black artist- or maybe one person who could do both under Jack’s supervision. He presented this all to Carmine Infantino, who was then the guy in charge at DC, and Infantino convinced Jack to launch the character himself…and to do so right away, in the pages of one of the above-mentioned three comics.  (“The Soul of Willie Walker”, The Black Racer and Shilo Norman Special [Oct., 2017].)

I think that my thirteen-year-old self would have been surprised to learn all that back in April, 1971, when I first read New Gods #3.  Because the Black Racer certainly seemed to belong in this title, and to Kirby’s burgeoning Fourth World mythos, from his very first appearance — which occurs on the comic’s very first page:

Some have seen in the Black Racer a knock-off by Kirby of his own immortal Silver Surfer.  I prefer to think of it as another expression of the creative impulse that led the King to send a guy soaring through space on a piece of sporting equipment in the first place.  Really, when all is said and done, is an armored Black man on skis any more absurd than a silver-plated dude on a surfboard?  Granted, the visual design of the Black Racer isn’t nearly as elegant as that of the Surfer, but what is?  It worked for me in 1971, and it still does.

There is, of course, the matter of the name, and the fact that the only thing black about the Racer is his skin color/racial identity.  The ’60s-’70s convention of including the word “black” in the names of any and all Black super-characters may be laughable now, but it was, as they say, a different time. 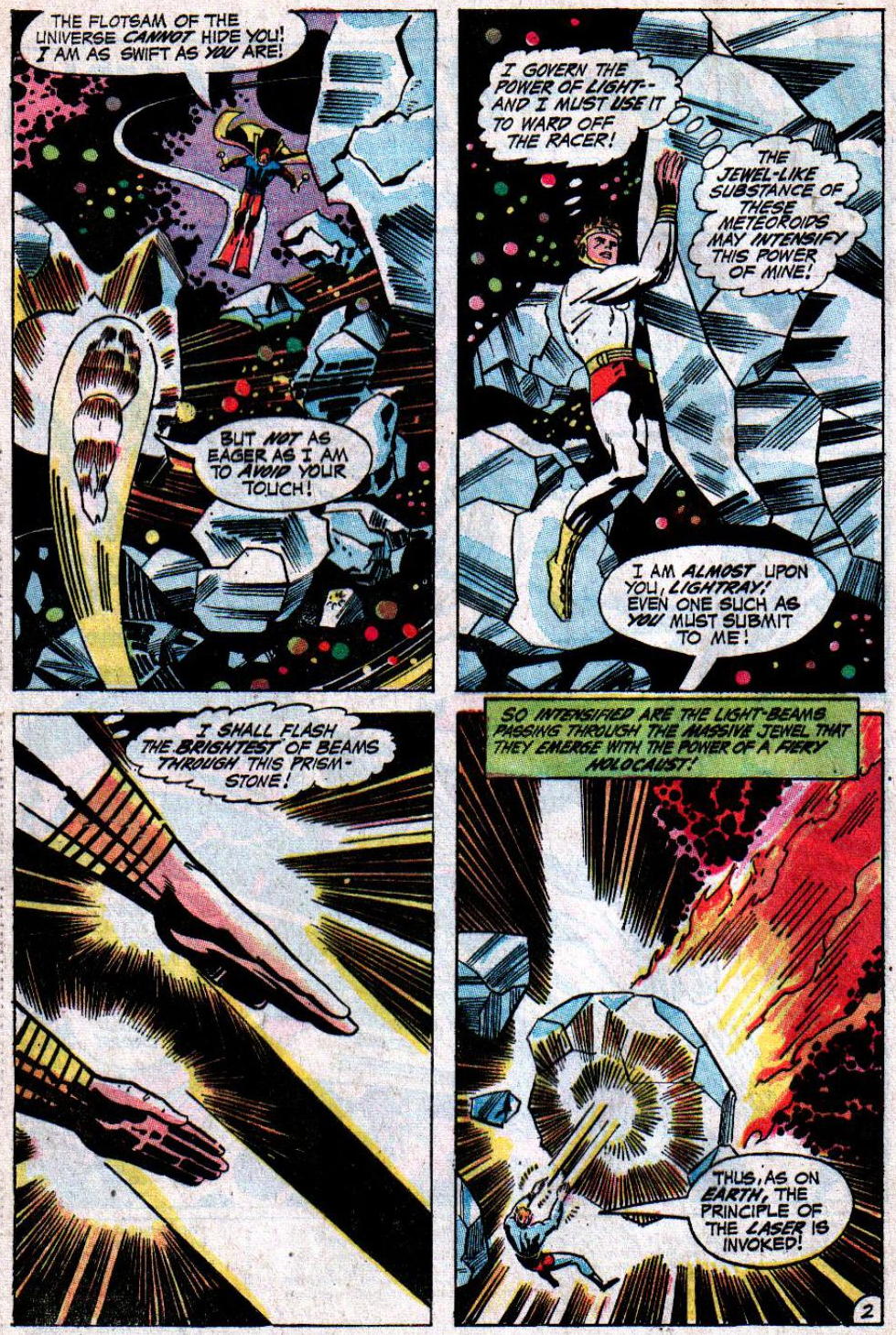 Lightray’s helpful explanation of how he’s just improvised a laser is perhaps a little too science-classy for a cosmic space-god, but I can live with it.

It’s looking pretty grim for our dashing young New God — so what say we stoke the suspense with a scene change? 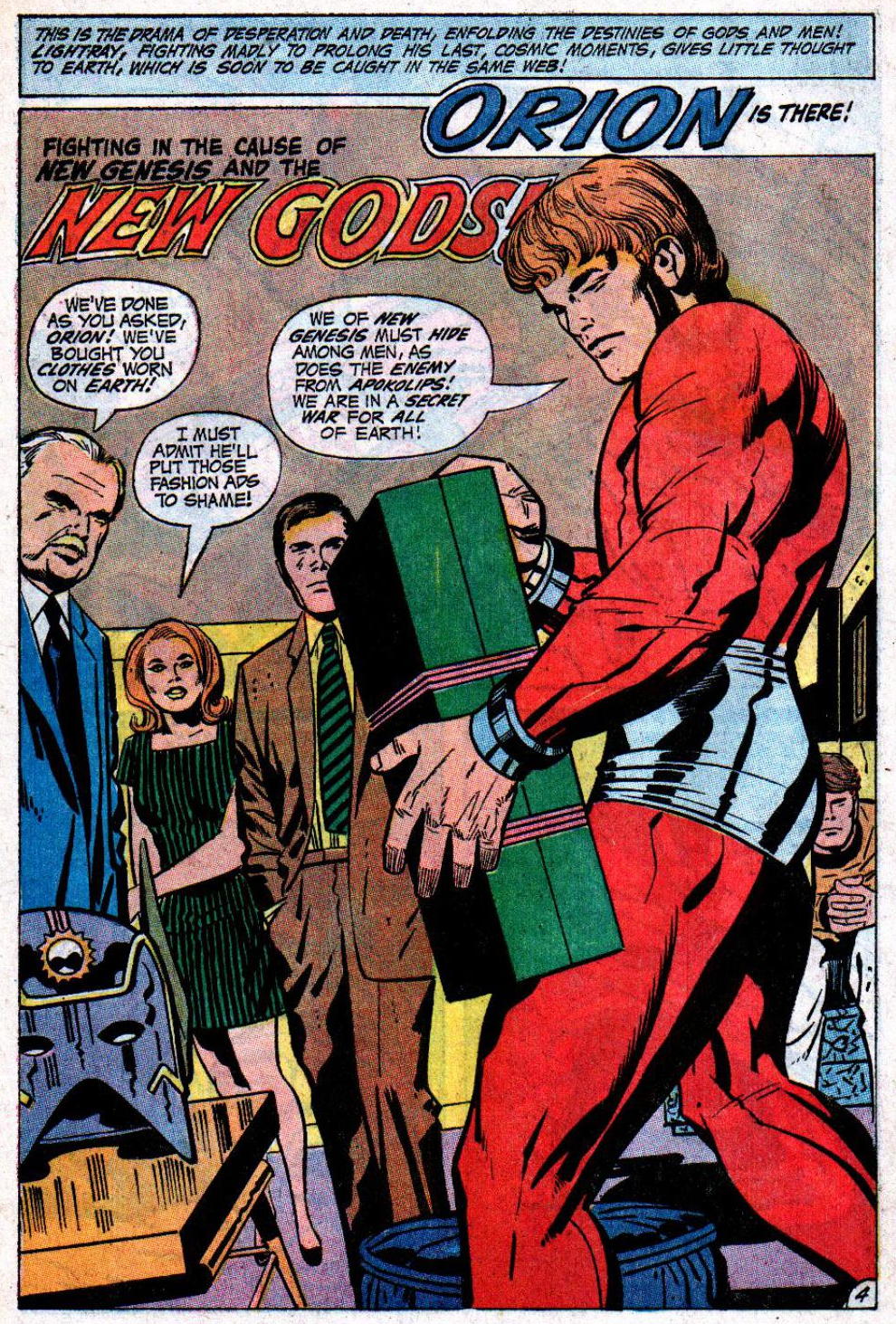 While Orion’s new human allies muse together over the bizarre circumstances they now find themselves in, the god himself indulges in a little solitary brooding.  Staring into a mirror, he declaims: “Though this face be of gentle New Genesis — it’s not the true face of Orion!” 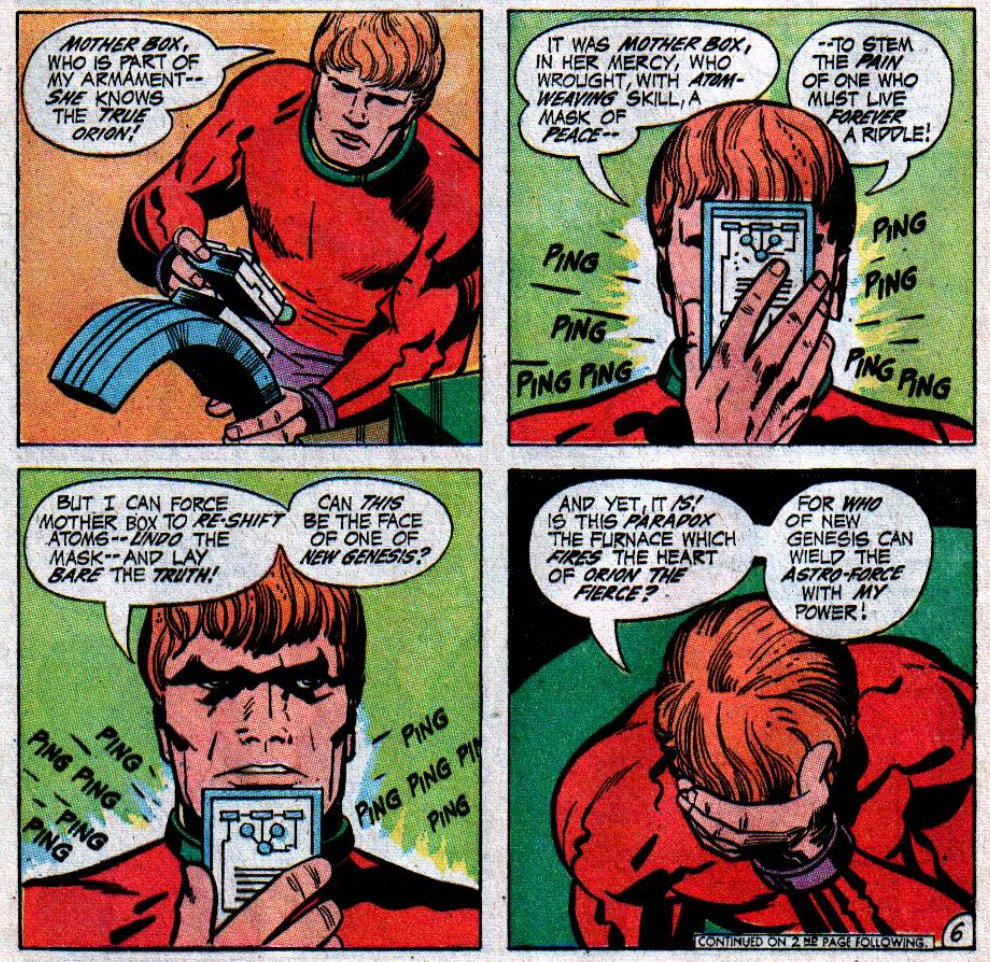 Fifty years after I first read it, I can still remember how shocking — even disturbing — this scene was to me at the time.  Up to this point, I’d blithely taken Orion for essentially being the Fourth World’s version of Marvel Comics’ Thor; I mean, give ol’ Goldilocks a dye job, bowl cut, and wardrobe change, and voila, Orion! — especially as rendered by the classic Thor art combo of Kirby (on pencils) and Vince Colletta (on inks).  But the face we were shown in the next-to-last panel of page 6?  Whoever that mug belonged to, it definitely wasn’t Thor.

In retrospect, I’m struck by how relatively subtle the difference is between Orion’s two faces in this issue, especially compared to the more savage and (to be blunt) ugly version of the “Apokolips face” we’d see in future issues.  How much of that disparity was down to the difference in inkers (Mike Royer would take over the gig with issue #5) and how much reflected an evolution in Kirby’s approach at the pencilling stage, I have no idea.  Still, coming out of nowhere as it did in April, 1971, the original Kirby-Colletta take on Orion’s “true” visage packed plenty of punch, all on its own.

Of course, one might question the whole idea that someone’s inner nature is or should be reflected in their outer appearance, or vice versa — and that would be a legitimate concern, if we were discussing a work of realistic fiction.  But we’re operating in the realm of myth, here, and myth is a form of metaphor.  And as a visual metaphor for Orion’s divided psyche, the secret shame of his two faces is entirely apt, and extremely potent. 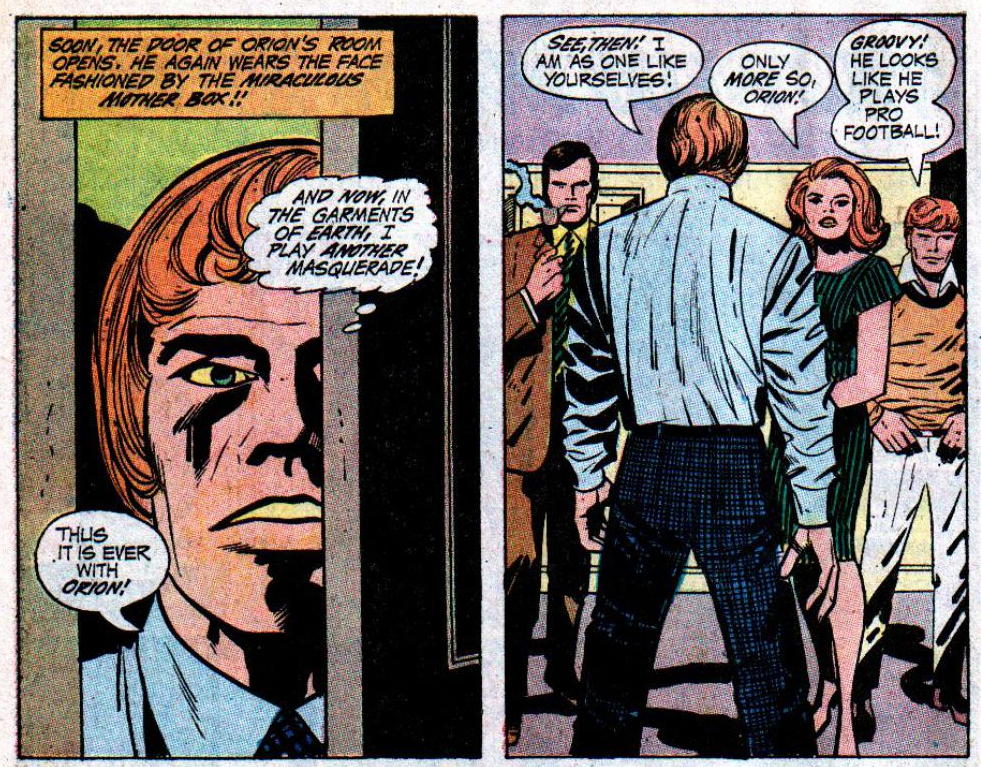 The pathos of Orion’s “masquerade” is only underscored by his mortal friends’ enthusiastic response to his new look — an enthusiasm that he and we both know would be considerably less if he’d come out of the other room wearing his other face.

Orion proceeds to tell the group that they’re going to go after the people who originally abducted them on behalf of Apokolips (which is where he’d found and rescued them, back in issue #1) — members of Intergang, the human criminal organization that serves Darkseid on Earth.  “These pawns of Apokolips — though they be creatures of Earth, play the awesome game of the gods!” he declares portentously, as cosmic energy crackles around his body.  “Let them beware of that game!!  The wrath of the gods exceeds a thousand fold their generosity!”

And speaking of gods…

Metron, whom we last saw in issue #1, may be an insufferably smug SOB (a fact he’ll be proving in the very next couple of panels), but you can hardly fault his timing.

The impact of the transition from page 9 to page 10 in the original printed edition — which required you to actually, physically turn the page to the following full-page splash  — is impossible to convey in this blog’s format, unfortunately; but trust me, it was a wowser.

As the Black Rider watches impassively, the man called “Screamer” turns and runs, but is shot in the back by his enemy, whom we’ll soon come to know goes by the name “Sugar-Man”. 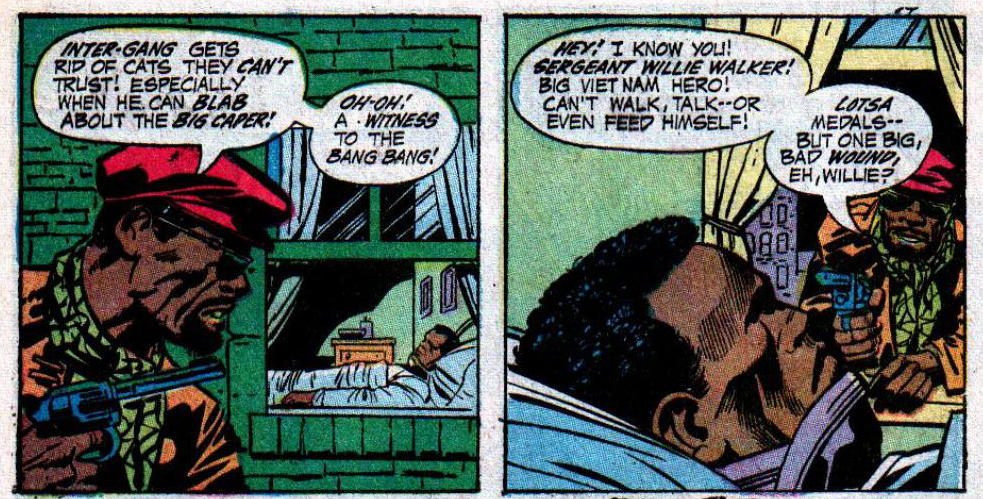 Here is Mark Evanier’s account of how Jack Kirby came to create Willie Walker, as well as the Black Racer:

One day, he read a news story about a young black football player who’d been injured in a traffic accident and lost the use of his arms and legs. The horrible contrast — what the young man had been versus what he was now — struck Jack as a solid dramatic foundation. He changed the car crash to a war injury because it made the figure more heroic and, in the thick of the Vietnam war, more timely. Then the Black Racer appeared in Jack’s mind, as miraculously as he would in the story of Willie Walker. The irony of Willie’s surname did not dawn on Kirby until someone else — I think it was me — first pointed it out. He decided to keep it in.

“You will not live,” the Racer told Willie in the second panel of page 13, “you will die!”  But death isn’t what happens when Willie takes the stranger’s hand — at least, it doesn’t look like what most of us would recognize as death.

A couple of brief, unrelated observations:

Peeping in through a first-floor window of the building ID’d by both Mother Box and Lincoln, our two investigators see a number of Intergang lowlifes discussing their recent activities.  “You did your job, Sugar-Man!” says one, soon to be identified as the criminals’ leader, Badger.  “Sure, there was a witness — but what can Willie Walker say?”

Badger tells Sugar-Man to forget about what he thought he saw — they all need to focus on the job they’ve been given to do by “the Apokolips people”, which involves a bomb:

As Sugar-Man takes off, the Intergang hoods discover their “special guns” are fizzing out — Orion’s Mother Box is sending out jamming signals that render them useless.

Sugar-Man manages to make it to a waiting truck, and speeds off with the bomb to complete Intergang’s mission.  He doesn’t realize, at first, that he has a pursuer — one who, a caption tells us, “is new at his mission — but old as time!” 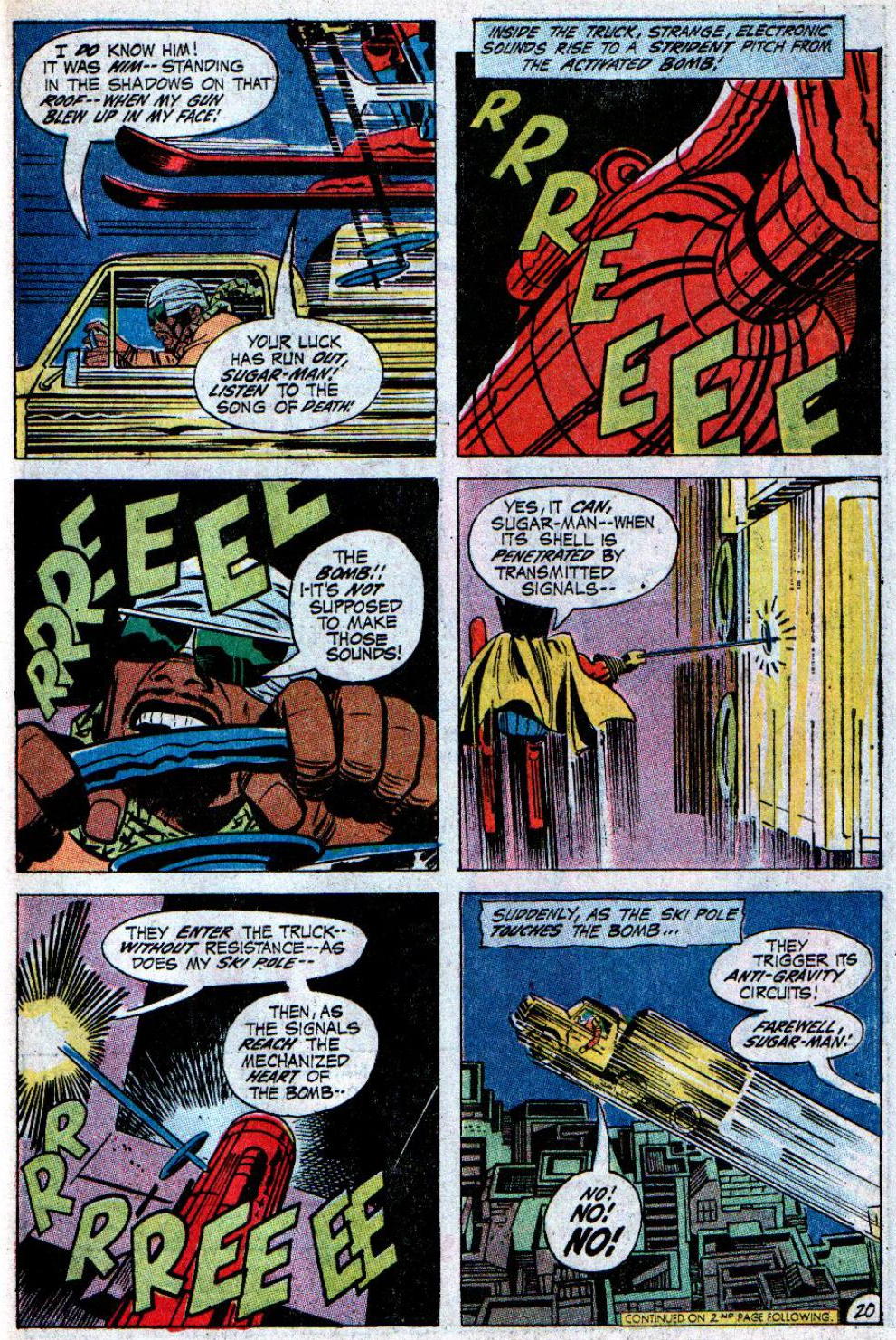 The action on this page is a little confusing.  On first reading, one is likely to think that the Black Racer is affecting the bomb — that he’s the one causing it to make the weird noises, and that it’s his ski pole that activates its anti-gravity function.  But as the first two panels on the following page will make clear, it’s actually Mother Box that’s responsible for these phenomena; the Black Racer is essentially just putting on a show. 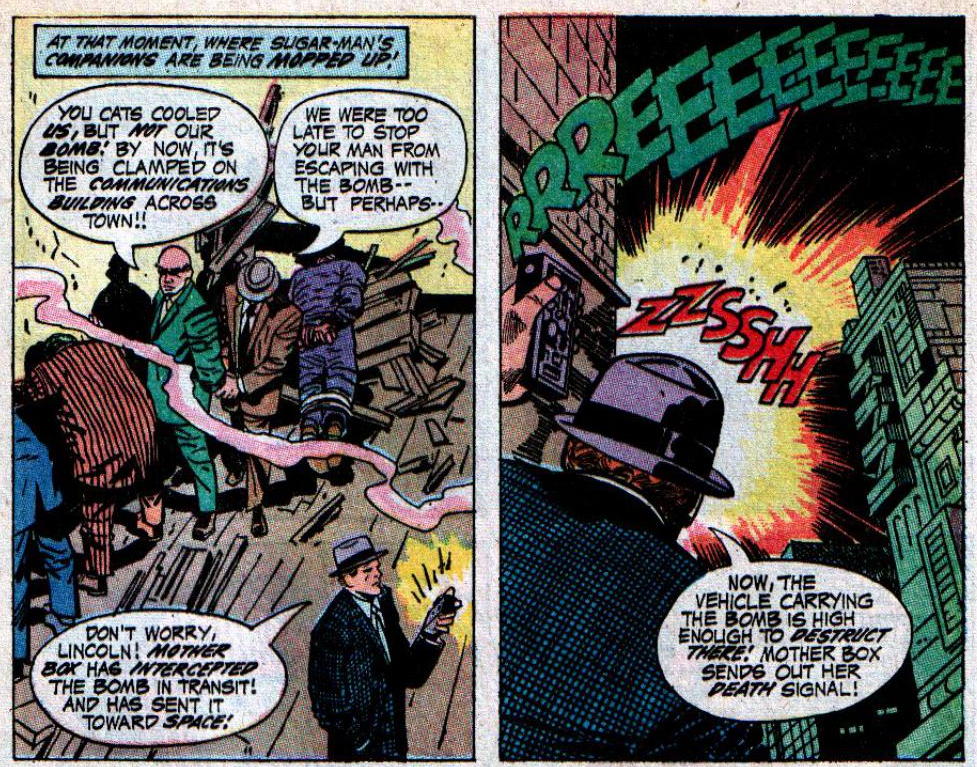 Orion proceeds to give Dave Lincoln (and us readers) an explanation of what was at stake should the bomb have detonated as planned: “It would have melted every bit of communication metal within a radius of thousands of miles — no telephones — no television — not even radios or telegraph!  It would have meant chaos!”

Next, Lincoln puts in a call to the police to come pick up the defeated Intergang members; meanwhile, the Black Racer, his present mission accomplished, flies back “to the ghetto of Sergeant Willie Walker!”

The Racer’s closing monologue gives us a few more details as to his nature — evidently, he’s merely one aspect of a greater being who’s got a lot of avatars skiing around the cosmos — but many questions remain.  What actually is his mission on Earth?  Is he merely a harbinger of death, who himself takes no direct action to alter the outcome of events?  If so, what are we to make of his attack on Lightray in the story’s opening pages?  Are the rules for his interactions with humans different from those for dealing with gods?

Mark Evanier says that the version of the Black Racer that appeared in New Gods was “quite different” from the original concept that Kirby had described to him and fellow assistant Steve Sherman, prior to Carmine Infantino’s convincing the King to bring the character into the Fourth World mythos.  One assumes that it would have to have been very different, as the version that saw print is so deeply rooted in the core Fourth World concept of the Source.  Perhaps the original iteration of the Black Racer wouldn’t have had the obvious limitations that the published version does — as it stands, it’s hard to imagine how the character could ever have been successful in a solo spin-off title — but, alas, we’ll never know just how Kirby would have executed that initial premise, any more than we’ll know whether he would have eventually extended and adapted the Fourth World version of the concept to make the Racer a more viable solo character.  As it is, the Black Racer would only appear three more times in Kirby’s comics before the entire Fourth World project was mothballed.

The first of those follow-up appearances would come in the very next issue of New Gods, out in June, 1971.  At present, I’m not planning to devote a full blog post to that story (I’m afraid there are just too many fine comics turning 50 that month for your humble blogger to be able to cover them all), but I’ll try to give the Racer his due when I briefly recap the tale for my New Gods #5 post, coming in August; I hope I’ll see you back here then for that one.