I know there must have been plenty of Marvel Comics fans who were dismayed when, in the summer of 1969, that year’s crop of giant-sized annuals arrived — and they were all 100% reprint material.  And perhaps I was a little disappointed, myself, as I’d very much enjoyed the brand new double-length stories and fun bonus features in the previous year’s Amazing Spider-Man and Avengers annuals (not to mention the same year’s Fantastic Four Annual #6, or 1967’s Avengers Annual #1, both of which I’m pretty sure I’d read by this time, having bought or perhaps borrowed them from a friend). END_OF_DOCUMENT_TOKEN_TO_BE_REPLACED

The second half of 1969’s iteration of DC Comics’ annual summer event teaming the Justice League of America with their Golden Age predecessors, the Justice Society of America, sported a cover that was — for this particular twelve-year-old’s money — considerably more exciting than the previous issue‘s.  That cover had featured a row of JSAers looking on passively while some nameless kid ripped up a lamppost; this one, pencilled and inked by Neal Adams, heralded the first meeting between the Superman of Earth-One (the one currently appearing in multiple DC titles every month) and the Superman of Earth-Two (the one who’d ushered in the whole Golden Age of Comics in the first place in 1938’s Action Comics #1) — and from the looks of things, it was going to be a, shall we say, rather contentious meeting.  That I would buy this comic book was never in question; but I have a hard time imagining anyone who was even a casual reader of DC superhero comics seeing this book in the spinner rack in July, 1969, and not picking it up.  END_OF_DOCUMENT_TOKEN_TO_BE_REPLACED

In the letters column of the comic that’s our main topic today, reader Normand LaBelle of Sherbrooke, Quebec expressed his great displeasure with the Captain Marvel series’ recent turn of direction, finding fault especially with the drastic changes to the titular hero’s powers and mission that had come about in issue #11.  In responding to Mr. LaBelle, the anonymous editorial staffer — probably Marvel Comics associate editor (and, as of this very issue, returning Captain Marvel writer) Roy Thomas — essentially agreed with him:  END_OF_DOCUMENT_TOKEN_TO_BE_REPLACED

As regular readers of this blog may recall, I started picking up the Roy Thomas-Neal Adams-Tom Palmer run of X-Men with the second issue, #57, in which the book’s new creative team began their “Sentinels” storyline.  I managed to score the next issue as well, and so was on hand for the debut of Alex Summers’ costumed identity, Havok — but then, the following month, I missed issue #59,  and thus didn’t get to read the end of that storyline.  END_OF_DOCUMENT_TOKEN_TO_BE_REPLACED 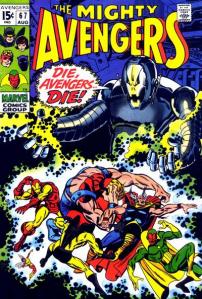 Fifty years (and one month) after the fact, I’m honestly not sure whether, upon first seeing the cover for Avengers #67 back in June, 1969, I had any idea that it hadn’t been pencilled by John Buscema, but rather by his younger brother, Sal.  The look of the featured characters was so close to what I was accustomed to seeing from the elder Buscema that It probably didn’t occur to me to consider that the piece might have been drawn by someone else — and, after all, I only knew Sal Buscema as an inker at this point (and only of his big brother’s work on Silver Surfer, at that).

But I feel fairly confident that a month later, when I first saw the cover of Avengers #68, I realized that something was different about it, even if I can’t claim to have any distinct memory to that effect.  Sure, the Avengers still closely resembled John Buscema’s renditions, but they were “off-model” just enough that I had to know they weren’t quite the same.

And once I’d picked up the book and flipped to the first page, i realized that more than just the cover art had changed…  END_OF_DOCUMENT_TOKEN_TO_BE_REPLACED

The titular subject of today’s post is the first full chapter in the final complete multi-issue storyline of Stan Lee and Jack Kirby’s Fantastic Four.  Along with that distinction, this story arc is well remembered for being one of the best examples of how Kirby, by this time deeply dissatisfied with his situation at Marvel Comics, was rather brazenly lifting his story ideas from stuff he’d seen on TV.  Several months earlier, he’d “playfully parodied the theme of” (as an item in this very month’s Marvel Bullpen Bulletins put it) the British cult program The Prisoner for the main conceit of a four-part Doctor Doom epic.  This time, it was an episode of Star Trek — or, more probably, two episodes of Star Trek.  But before we get into all that, here’s a bit of background to help set the stage…  END_OF_DOCUMENT_TOKEN_TO_BE_REPLACED

When last we left Aquaman, the King of the Seven Seas had just been reunited with his long-lost Queen, Mera, and the two were swimming swiftly back to Atlantis to confront Narkran — the man whom Aquaman had trusted to rule Atlantis in his stead while he searched for the kidnapped Mera, and whom he’d since learned had actually been conspiring all along with surface-world gangsters to take and hold Mera prisoner.  Both King and Queen were unaware, however, of three other critical situations that were unfolding at the same time: the first (and most urgent) being the solitary battle of Aquaman’s junior partner Aqualad against a fearsome sea monster called the Bugala; the second, a burgeoning popular movement of rebellion against Narkran’s despotism by a band of young Atlanteans; and the third, an ongoing series of tremors that were rocking the undersea kingdom’s foundations.  END_OF_DOCUMENT_TOKEN_TO_BE_REPLACED

When last we saw Captain America, back in May, the Living Legend of World War II was in a very tight spot.  His greatest foe, the Red Skull, had used the awesome power of the Cosmic Cube to switch bodies with him, and then, after forcing him into conflicts with police officers, his buddies in the Avengers, and even his girlfriend Sharon Carter, had banished him to the remote Isle of the Exiles.  END_OF_DOCUMENT_TOKEN_TO_BE_REPLACED