As we related on this blog back in February, in early 1971 Marvel Comics became the first major American comic-book company to publish a story dealing with drug abuse, when they released three monthly issues of Amazing Spider-Man without the Comics Code Authority’s Seal of Approval.  But DC Comics could easily have been the first to do so, instead, if only they’d had the nerve — or at least that’s how artist Neal Adams tells the story.

That story appears to begin with a project that DC was invited to produce for a government agency (either the City or the State of New York, depending on the version of Adams’ narrative you consult).  Both Adams and his creative collaborator on DC’s famously socially conscious title Green Lantern, writer Denny O’Neil, were asked to submit treatments for a comic book about drug addiction.  This, presumably, would have been some sort of giveaway comic, distributed in such a manner that the Comics Code would have been irrelevant — but the project never came to fruition.  As Adams told interviewer Bryan Stroud in 2007:  END_OF_DOCUMENT_TOKEN_TO_BE_REPLACED 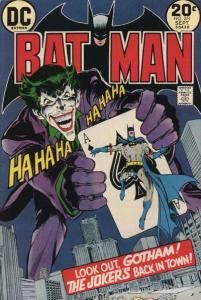 Over the course of writer Denny O’Neil and artist Neal Adams’s classic early-’70s collaboration on Batman, the team was responsible not only for introducing one major new adversary (Ra’s al Ghul) to the ranks of the Darknight Detective”s greatest foes, but also for reclaiming and refurbishing of two vintage baddies who’d fallen out of favor in recent years.  The second of these restorations to appear, “The Joker’s Five-Way Revenge!” (Batman #251 [Sept., 1973]), is doubtless the best-remembered of the two, due to its ultimately having had such a dramatic impact not only on the Bat-mythos, but on the DC Universe as a whole — rehabbing what had become a joke of a character (no pun intended) during the camp “Batmania” era of the mid-Sixties into the comics medium’s quintessential avatar of psychopathic evil — a character arguably more popular than all but a small handful of DC’s best-known superheroes, and one with enough cultural gravitas for screen portrayals of him to have earned Academy Awards for two different actors.

I didn’t buy that one.  END_OF_DOCUMENT_TOKEN_TO_BE_REPLACED 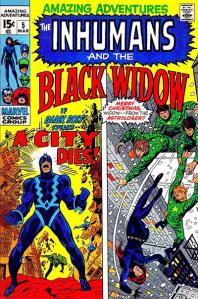 When we last checked in with the Inhumans feature in Amazing Adventures, back in December, the new creative team of writer Roy Thomas and artist Neal Adams had just launched a new multi-part storyline.  The beginning of this new arc found the Inhumans’ monarch, Black Bolt, traveling to the United States — more specifically, to San Francisco — to begin the process of developing better relations between his people and the outside world.  (Exactly how he expected to accomplish this by skulking around an urban waterfront at night, especially given his self-enforced muteness, was unrevealed.)  BB got off to a somewhat rocky start, getting involved in an altercation with some petty criminals as he came to the defense of a boy named Joey, the nephew of the hoods’ leader, Roscoe.  Meanwhile, back in the Great Refuge, the king’s mad brother Maximus lay in what appeared to be a state of suspended animation — something Black Bolt had set up prior to his departure, without explaining his reasons to the other members of the Inhumans’ royal family.  A suspicious Gorgon and Karnak elected to wake Maximus up, which turned out to be a bad move, since the previously non-super Max had recently developed immense mental powers.  Maximus promptly unleashed a brain blast that traveled halfway around the world before striking down Black Bolt, simultaneously robbing him of his memory.  This ten-page installment ended with young Joey, having just managed to rouse his mysterious new friend, trying to get him to say something — unaware that if the Inhumans’ incognito ruler uttered but a mere whisper, the power of his voice would unleash terrible destruction.  Yipes!  END_OF_DOCUMENT_TOKEN_TO_BE_REPLACED

It’s summertime!  The most wonderful time of the year — especially if you’re a fan of DC’s original super-team, the Justice Society of America, and the year happens to fall within the range of 1963 to 1985 — ’cause that means it’s time for the annual team-up between the JSA and their pals in the Justice League of America.  1971 brought the sixth of these events that I’d personally enjoyed since becoming a comic-book reader, and the ninth published overall.  And judging by the cover heralding this year’s team-up — more specifically, the two columns of floating heads flanking the dramatic central image by Neal Adams — 1971’s iteration of this beloved tradition was going to offer us something new: for the first time, the featured rosters of the two teams would be identical.  We were going to get two Supermen, two Flashes, two Green Lanterns, and so on — all for the price of one.  (Of course, as heralded by that “only 25¢ Bigger & Better” slug at the very top of the cover, the “price of one” had just gone up a substantial amount.  But more about that in a bit.)  END_OF_DOCUMENT_TOKEN_TO_BE_REPLACED

In June, 1971, we Marvel Comics readers turned to the “Bullpen Bulletins” text page appearing in that month’s issues (including the book that’s the topic of today’s post, naturally) to find the “Stan Lee’s Soapbox” reproduced below.  This was a particularly lengthy edition of editor Lee’s monthly column, taking up almost a third of the page’s available real estate — but considering the occasion, that didn’t seem at all inappropriate.  END_OF_DOCUMENT_TOKEN_TO_BE_REPLACED

The fourth issue of Jack Kirby’s Forever People brought us the second chapter in the five-part story arc which would prove to be the centerpiece of this ultimately short-lived series.  But, published as it was on the first day of June, 1971, the issue was also the harbinger of a new era for its publisher, DC Comics — marking the end of the 32-page comic book at the company (at least for the next eleven months), as the standard-size comic’s page length was increased to 48 pages, and the price raised from 15 to 25 cents.

I don’t actually know whether this particular issue was the very first 25-cent DC comic I myself saw or bought — unlike the occasion of DC’s last price hike, I have no clear memory of the specific comic that presented me with the sensation of “sticker shock” that surely must have accompanied my discovery of the change.  (And it was a change I would have been utterly unaware of until I was confronted by it at the spinner rack; DC had given no hint this was coming in the past month’s books, and I was not yet plugged into any fan networks, formal or otherwise, that might have broken the news.)  But Forever People #4 could have been the first — it was in DC’s first batch of 25-cent releases, for sure — so I’m going to use its release as a platform for discussing the change.  END_OF_DOCUMENT_TOKEN_TO_BE_REPLACED