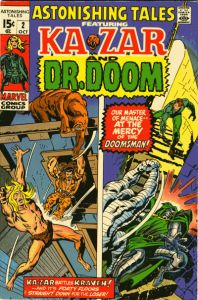 As I’ve discussed in a previous post, when Marvel Comics brought back their mid-Sixties double-feature format with two titles in 1970, my younger self promptly jumped on one of them — Amazing Adventures, co-starring the Inhumans and Black Widow — picking up both the first and second issues.  For some reason, however, I put off sampling the companion title — Astonishing Tales, headlined by Ka-Zar and Doctor Doom — for several months, so my first issue was the series’ third.  Yes, reader; that does indeed mean that I turned up my nose at new work from not just one, but two giants of comic book art — Jack Kirby (who already had one foot out the door at Marvel) and Wally Wood (who was just putting a foot back in).  What can I say?  I was a callow youth, who pretty much took Kirby for granted (he put a couple of new books out every month, after all; if you missed one, there’d be another one along in a couple of weeks) — and, truth to tell, I didn’t yet know who Wood even was, or why I should care.  END_OF_DOCUMENT_TOKEN_TO_BE_REPLACED

According to the Mike’s Amazing World of Comics web site, Robert Kanigher scripted 2,707 comic book stories in his five-decade career, the vast majority of them for DC Comics.  But despite the fact that I’ve been reading DC comics myself for over five decades — three of which overlap with those during which Kanigher was working — I’ve never really felt like I had a handle on the guy.  END_OF_DOCUMENT_TOKEN_TO_BE_REPLACED