By December, 1965, I had been buying and reading comics for almost half a year, and in that time Justice League of America had definitely become my favorite comic book — the one series I would buy whenever I saw a new issue.  That’s not surprising, I guess, considering its all-star cast of heroes.  Concurrently, I had also sampled individual issues of a number of the Justice League members’ own series (and most of those that I hadn’t gotten around to yet, I’d be checking out before long).  But there were other DC heroes I only glanced at when perusing the spinner racks at the Tote-Sum.  These particular heroes — characters like the Doom Patrol, the Metal Men, and Ultra the Multi-Alien — were a little more bizarre, and a little less-human seeming, than Superman, Batman, and the rest of the JLA gang.  Nevertheless, there was a way for such characters to get my attention, and that was to appear in the JLA’s own book — as Metamorpho, the Element Man, did in Justice League of America #42’s “Metamorpho Says — No!” (produced, per the Grand Comics Database, by the series’ regular team of writer Gardner Fox, penciller Mike Sekowsky, and inker Bernard Sachs).

Metamorpho, the creation of writer Bob Haney and illustrator Ramona Fradon, had debuted just a little over a year earlier, in the 57th issue of DC’s tryout book The Brave and the Bold.  Following a second appearance in that title, he’d been given his own series, which was up to four issues by the time JLA #42 came out.  As recounted in his origin story (re-presented in abbreviated form in his JLA appearance), Metamorpho had once been a young soldier-of-fortune Rex Mason, who’d been employed by an unscrupulous businessman named Simon Stagg to retrieve an ancient Egyptian artifact, the Orb of Ra.  In the course of events, Rex was accidentally exposed to radiation from the meteorite from which the Orb was made, granting him superpowers — more precisely, the ability to shapeshift, and to transmute himself into any element (or combination of elements) found in the human body — but also afflicting him with a permanently inhuman, grotesque appearance.  As Metamorpho, Rex Mason found himself drafted into a superhero role he really didn’t want, and which he was anxious to discard as soon as he could find a cure for his freakish condition.

Thus, contrary to JLA #42’s cover blurb, it really wasn’t all that “astonishing” (at least when you stopped and thought about it) that when offered membership in the Justice League of America, Metamorpho declined to accept: 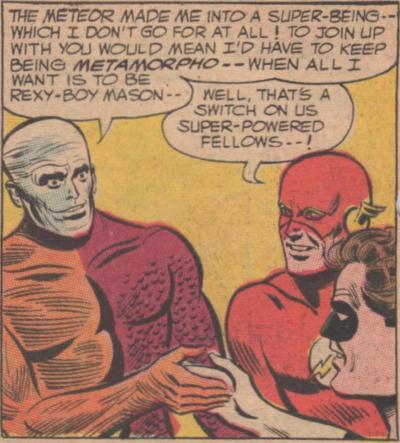 On the other hand, from the JLA’s perspective, offering someone membership in their club was kind of a big deal — and it was also a big deal for the book’s readers.  Comics fans today are used to a constant churning in the rosters of their favorite super-teams, but in the first five years of their existence, the Justice League had inducted only three new members — Green Arrow in issue #4, the Atom in #14, and Hawkman in #31 — all of whom were suitably honored to be asked.  Notwithstanding this precedent, in JLA #42 Metamorpho’s admission is determined to be a no-go as early as page 7 of the 24-page story.  However, in a twist, it’s another prospective member — an extraordinarily powerful being from outer space calling himself “the Unimaginable” — whose drive to be accepted into the League drives most of the tale’s action.

The Unimaginable (whose true form is incomprehensible to human minds, and is thus depicted by artist Sekowsky as a jagged two-dimensional outline) has discovered the JLA on his lonely travels through the cosmos, and has become a big fan — so much so, that he’s decided he should join them.  As he explains in a flashback:

But even after being turned down by the Element Man, the League isn’t keen to admit an unknown quantity like the Unimaginable — who, unfortunately, is not prepared to take no for an answer.  He promptly assaults the League’s membership committee (and their guest, Metamorpho), using an assortment of bizarre alien life-forms as proxies.  The heroes overcome their adversaries, and the Unimaginable beats a retreat back into space — but the JLA members decide they’d better follow him to make sure he never tries this again, leading to this classic panel:

(Yes, Operation “Outer Go-Go” — definitely a mission title for the ages.  Thanks, Flash!)

Setting all snark aside, however, the JLA’s journey to the “rim of the universe” ultimately leads to a sequence which, in 1965, was more mind-blowing than anything else I’d encountered in my five months of comic book reading.  Having followed a trail of atoms (!) left like breadcrumbs by Metamorpho, who’s hitched a ride with the Unimaginable disguised as one of his alien hench-things, the heroes discover that their foe is powering up by chowing down on the energies of an exploding supernova.  This gives Green Lantern a swell idea:

(Yes, GL’s power ring can do just about anything he wants it to, just in case you were still wondering.)

The disincarnated Leaguers, as well as Metamorpho, get themselves absorbed into the Unimaginable’s not-exactly-a-body, and proceed to unload their special brand of whoopass upon him (because somehow, even as energy-beings, they still have their regular powers) — giving him an awful “headache”, and a worse “stomachache”, until he basically expires (or seems to, anyway.  In fact, he survives, and will return only two issues later, in JLA #44).  The League members and Metamorpho then return triumphantly to Earth, where Metamorpho gamely agrees to be a stand-by member, ready to answer the call should the JLA ever have special need of his talents.

And that’s basically it for this adventure — and also, apparently, for the Justice League’s interest in adding to their roster at this particular time, since so far as we’re shown, the membership committee doesn’t follow up with either Adam Strange or the Elongated Man.  (Not for a long time, anyway; in fact, both heroes, as well as Metamorpho himself, would eventually be inducted into one version or another of the team.)  Indeed, there would be no further additions to the League’s official roster until four years later, when Black Canary joined in JLA #75.

Metamorpho’s appearance in this issue may have been intended to increase awareness of the character and thereby improve the sales of his own fledgling title; if that was the goal, however, the issue may not have succeeded very well.  For my own part, while I enjoyed JLA #42, it didn’t lead me to sample any issues of the Element Man’s own comic — and indeed, after only seventeen issues Metamorpho would be canceled, in January, 1968.

But like many another “failed” comics headliner, Metamorpho has never really gone away.  Over the decades, he’s made fairly frequent guest appearances in a variety of comics, and has served as a member on several superhero teams, most notably the Outsiders.  His mythos has even extended into one of the most acclaimed bodies of comics storytelling of the last thirty years, Neil Gaiman’s The Sandman, with “Façade”, a tale about the Element Man’s sometime-partner Element Girl (originally published in Sandman #20), becoming probably the most widely-read Metamorpho-related story ever, due to its frequent reprintings in a variety of editions.

All in all, not a bad track record.  Better than Ultra the Multi-Alien’s, anyway.

Back in the old days, most comic books (well, most of the ones I read, anyway) had letters columns, which would carry the missives avid readers wrote in to a book’s editors critiquing the latest issue, asking questions, and making suggestions.  It’s very different in 2015 — while there are still a few comics letters columns here and there, they’ve mostly been superseded by comments boards, social media, and other online communications.  Nothing against the Internet, but personally I still enjoy a printed letters column, and consider it a nice bonus when a modern comic includes them.  In the mid-Sixties, however, it wasn’t just an optional form of communication; it was essential — not only for fans to communicate with the makers of comics, but for them to make contact and share ideas with each other.  For my own part, though I had friends who read comic books, it would be another couple of years before I’d find someone to hang out with whose interest in these four-color wonders was as avid as my own; in the meantime, I had the letters pages.  And even if I never met any of these other people who cared enough about comic books to write letters to them, I knew they were out there.

As you might expect, in my first year or so of comics buying, when my purchasing opportunities were more infrequent and haphazard, many if not most of the letters I read were commenting on comics I hadn’t actually seen.  Even Justice League of America, a comic I’d managed to buy for three issues in a row, was carrying letters in the 42nd issue about a story that had come out prior to the first one I’d read, due to the months-long lag time between when a comic was editorially produced and when it was actually published.  That story, JLA #38’s “Crisis on Earth-A”, was actually the conclusion of a two-part tale that featured the third annual appearance in JLA of the titular team’s predecessors, the Justice Society of America.  Having read Green Lantern #40, I was of course already aware that certain DC heroes had had earlier versions published in the 1940’s, and was also familiar with the “multiple Earths” concept that allowed them to co-exist with their present-day counterparts. The JLA letter pages, however, were how I first learned that there was an entire team of such characters.  And this particular letter was probably where I first encountered the idea that the heyday of these heroes represented nothing less than a Golden Age of Comics:

Beyond just introducing me to the idea of the “Golden Age”, however, the writer of this letter actually extended the concept in a way that was (probably) just as brand-new to every other comics reader in December, 1965, as it was to me.  Comics historian (and Bat-film producer) Michael Uslan has credited Scott Taylor’s coinage of the phrase “Silver Sixties” here as being the probable origin of what would eventually become a standard term used in referring to the era of comics history spanning from 1956 to (roughly) 1970 — the ‘secret origin”, if you will, of the Silver Age of Comics.

Of course, the era identified by that phrase includes the period covered by this blog (for the next five years, at any rate).  You may have noticed, however, that I haven’t been using the term “Silver Age”, except as a category label.  That’s mainly because I don’t accept the basic underlying premise behind designating the ’40s as the Golden Age, the ’60s as the Silver, the ’70s as the Bronze, and so on — the premise that comics were at their very best in the ’40s, and have gone steadily downhill ever since.  I don’t think that that is the least bit true, and for that reason, I generally try to avoid using the terminology.  That said, the concept of the Silver Age is extremely well established in comics fandom, and therefore it seems to me to be worth noting the phrase’s presumed fiftieth anniversary here.

And finally, before saying goodbye to Justice League of America #42, I’d like to share this house ad from its pages as a quick preview of my very next post.  Perhaps this is what Flash really meant with that reference to Operation “Outer Go-Go”? 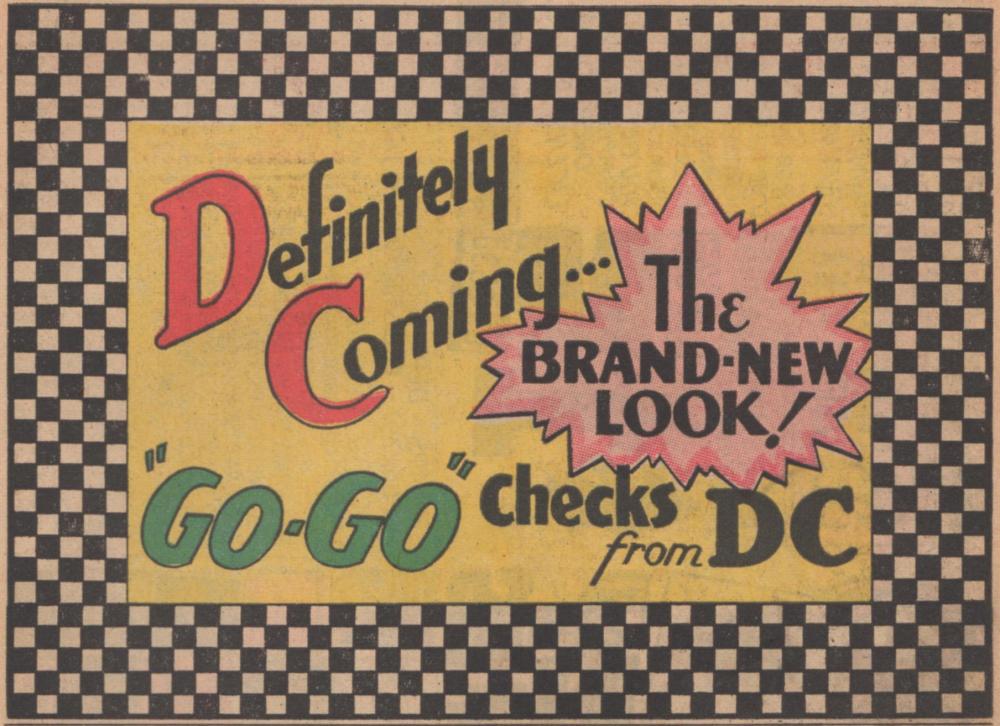