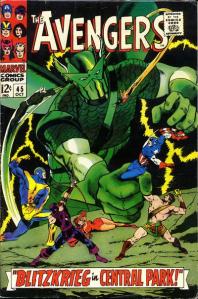 In his Introduction to the 2008 Marvel Masterworks volume reprinting this issue, scripter Roy Thomas compliments his artistic collaborator Sal Buscema for the “dramatic yet difficult cover”, noting that “it’s always hard to have a bunch of little guys fighting one big guy — and Goliath’s in-between size just complicated things further.”  That’s undoubtedly true; but my recent re-reading of Thomas’ words in preparation for writing this post reminded me of another cover that met the very same challenge, with at least a couple of the same characters — namely, Sal’s big brother John’s cover for Avengers #45, which came out almost exactly two years prior to Avengers #69, and which also just so happens to have been not only my first Avengers comic, but my first Marvel comic, period.  There’s no good reason why any of that should be particularly significant to anyone except me, I realize; but I hope you’ll pardon my momentary self-indulgence in deciding to highlight it here anyway.

Of perhaps more interest to a broader section of this blog’s readership is the anticipation my twelve-year-old self felt, back in August, 1969, regarding this issue’s promised appearance by Kang the Conqueror.  I already knew a bit about this time-traveling villain, thanks to his appearance in an episode of the 1967 Fantastic Four animated TV series in his original guise of “Pharaoh Rama-Tut”, as well as his turning up under yet another name, that of the “Scarlet Centurion”, in 1968’s Avengers Annual #2.  And in the very same month that I picked up Avengers #69, I also bought Fantastic Four Annual #7, which featured a reprint of a tale from 1964’s FF 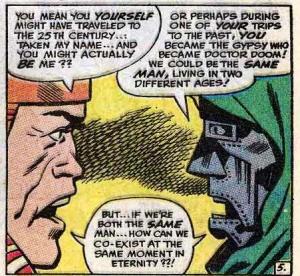 Annual #2 in which Rama-Tut meets the present-day super-villain Dr. Doom, and the two malevolent masterminds decide — for no especially convincing reason — that they might possibly be the same person existing in two different times, despite the fact that neither baddie has any memory of ever having been the other guy.  I can’t say for sure whether I read this story before I read Avengers #69 (FF Annual #7 is supposed to have come out a week before the Avengers book, but that doesn’t necessarily mean that I bought or read them in that order), though I suspect I did.  Assuming that’s so, it would just have added to the mystique of, and heightened my interest in, a major Marvel villain whom I so far had yet to actually see in his “main” villainous identity.

My interest wouldn’t be immediately satisfied, however, as Roy Thomas and Sal Buscema (with inker Sam Grainger) began their first chapter of what would prove to be a three-part story (the final Avengers continued story for a while, alas) with a scene that, I’d soon discover, tied into the current storyline in Iron Man: 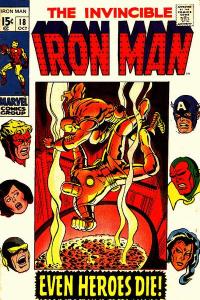 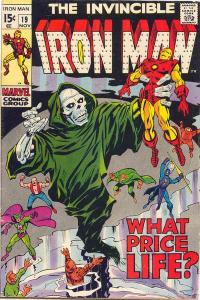 The footnote by “Stan and Roy” in panel 2 advises readers who’d already picked up and perused Iron Man #19 that this story takes place after that one.  It’s possible that I was one of those readers, since IM #19 appears to have arrived on stands a week before Avengers #69, and I did buy a copy while it was new.  But since I was only buying Iron Man occasionally at this point, and had in fact not bought the previous issue (which guest-stars the Avengers, and leads directly into Avengers #69) I’m inclined to think that I went back to the store and snagged the Armored Avenger’s latest adventure only after reading this tale of his fellow Assemblers, which (as we’ll see) will conclude with Tony Stark’s fate still unresolved.

The mighty Thor, whose whereabouts were on the minds of his fellow Avengers at the end of page 2, unsurprisingly shows up on the very next page — as does his fellow old-timer, Captain America.  It’s worth noting that neither of these stalwarts were technically supposed to be “active” Avengers during this time (nor, for that matter, was Tony Stark’s alter ego, Iron Man).  But, beginning around issue #66, Roy Thomas had begun dropping one or more of the “Big Three” into Avengers stories on a semi-regular basis; eventually, the “semi-” would be forgotten about, and it would be almost like Goldilocks, Winghead, and Shellhead had never really left. 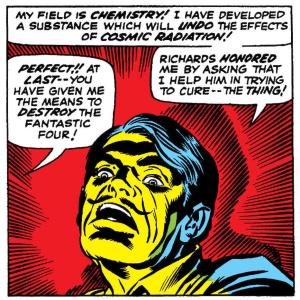 There’s no mention of it here, but this was in fact not Dr. Jose Santini‘s first rodeo involving the super-beings of the Marvel Universe.  He had  previously appeared in Fantastic Four #68-70, in which he was kidnapped and then impersonated by the Mad Thinker as part of the latter’s plot to deceive and then destroy the FF.  In that storyline, he was an expert in chemistry and cosmic radiation; in this one (as will be more fully explained in Iron Man #19), he’s a specialist in synthetic tissues, and their potential applications for medical use in humans.  Still, it’s obviously the same guy; after all, genius-level scientific polymaths were practically a dime-a-dozen in the Marvel Universe of the 1960s.

Emerging from the wastebasket into the hospital corridor, the mysterious “doll” is seen by the two S.H.I.E.L.D. agents, who fear it may be some sort of ambulatory bomb, and attempt to grab it.  Unfortunately for them both, the diminutive figure is super-strong; and the only effect that a shot from one of the agent’s “blasters” has on it is to make it grow…

Thor had indeed encountered the Growing Man a couple of years previously in the pages of his own series, in a story which –like all the early Kang/Rama-Tut tales — was the work of the Conqueror’s creators, Stan Lee and Jack Kirby.  In that 16-page adventure, Kang had buried the Growing Man in the 20th Century to hide him away until the day he chose to break him out as a secret weapon against his enemies, in his own far-future time.  (Seems like a complicated strategy, but what do I know?)  The Growing Man was accidentally unearthed in New York City, and proceeded to run amok, getting bigger all the while.  The “stimuloid” was opposed by Thor, but the battle had ended inconclusively, when Kang himself showed up and “de-energized” the Growing Man to shrink him back down to doll-size.  Kang had then attempted to return to the future with his now travel-sized android weapon, only to have Thor use his hammer to entrap the villain’s time machine within “a universal infinity vortex!”  The Thunder God had believed his action had banished both Kang and the Growing Man “beyond all time… beyond all place…” — though, as our present tale makes obvious, at least one (and so probably both) somehow managed to escape that fate.

Game to match the stimuloid size for size, the new Goliath, aka Clint Barton, shoots up to his maximum height — but the strain makes him woozy, and the Growing Man downs him with a single blow — which, of course, makes him grow larger still.  Then, before the pursuing Avengers can take further action…

The double-page spread by Buscema and Grainger which follows, giving us our first view of Kang (not counting the cover), may lose some of its impact in its constrained presentation here, but trust me — in print, it’s very impressive:

The tale of Kang’s ill-starred love for Ravonna had been told in Avengers #23 (Dec., 1965) and #24 (Jan., 1966) by Stan Lee and Don Heck.  The princess of a people conquered by Kang in the future, Ravonna was initially (and understandably) disdainful of his amorous attentions, but had ultimately fallen in love with him; and, in the story’s climactic scene, had apparently sacrificed her own life to save the Conqueror from a traitorous general’s assassination attempt.  The Avengers (who at that time comprised the so-called “Kooky Quartet” of Captain America, Hawkeye, Quicksilver, and the Scarlet Witch) had been in the process of being returned to their own time just as these events were unfolding, however, and so had never learned exactly how things had worked out.

The Avengers — Thor, especially — don’t much care for Kang’s attitude, and say so.  Kang promptly sends a squad of soldiers against them; but before the brouhaha can really get underway, a voice calls out (from off-panel) for everyone to halt.  The Avengers turn to see who it is, and… 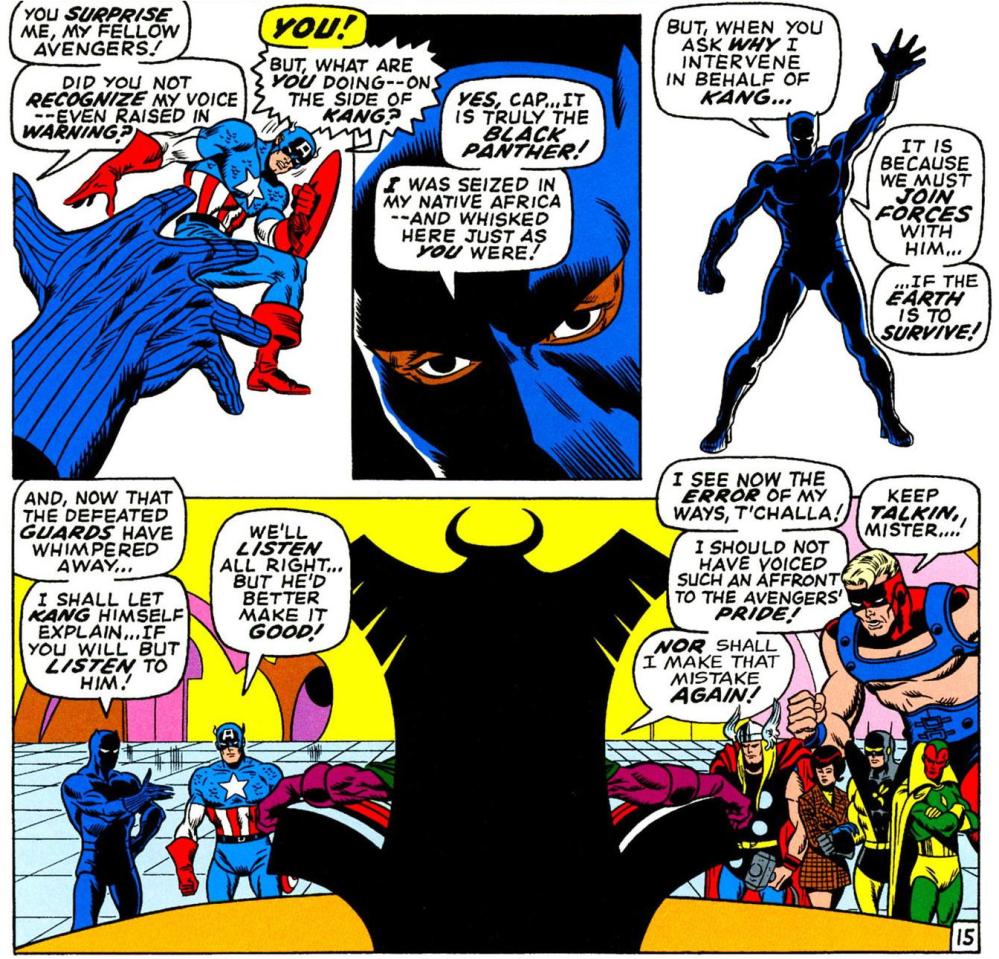 This is the first appearance of the Grandmaster, who would of course go on to make many, many more appearances across Marvel’s comic book line (not to mention its movies) over the next five decades.  Eventually, he’d be revealed to be one of the “Elders of the Universe” — but as far as we readers knew back in August, 1969, he was one of a kind.

Modern artistic interpretations tend to shave a few inches off the top of the guy’s cranium, but otherwise, Sal Buscema’s original character design has come down through the last half-century basically intact. 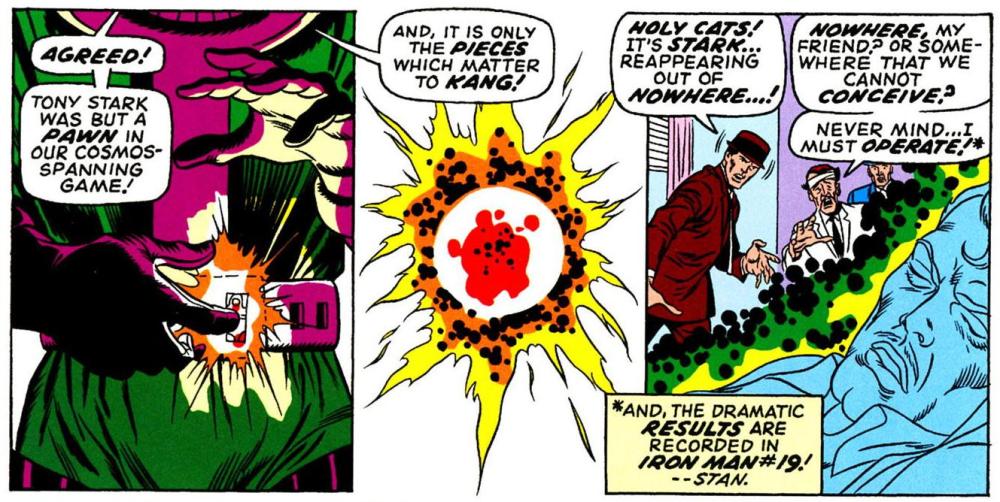 We do indeed learn the results of Dr. Santini’s efforts in Iron Man #19 — and we’ll have more to say about them in our post about Avengers #70 next month — but for now, suffice it to say that Tony lives, OK?  (Big surprise, I know.)

A muscular dude wearing a cape, with an emblem on his chest…

Another guy wearing a pointy cowl, and generally going for a “creature of the night” look…

And, finally, a fella who can run really, really fast.

Surely my twelve-year-old self, who’d been reading DC Comics’ Justice League of America since 1965, must have immediately recognized these four brand-new Marvel villains as obvious parodies of the JLA’s foremost four heroes, right?

But to learn more about my secret shame, you’ll have to come back next month, when the blog takes a look at Avengers #70.  I do hope I’ll see you then.  (No, really, I do.)