In early 1971, when the subject of today’s post blog first showed up on spinner racks, Jack Kirby had been producing new comic books for DC Comics for almost half a year.  Not only had three issues of Kirby’s debut project, Jimmy Olsen, been released by this time, but so had the premiere issues of his three brand new titles — Forever People, New Gods, and Mister Miracle (the latter actually hitting stands on the very same day as Jimmy Olsen #136, January 14).  He was becoming established (or, more accurately re-established) at the publisher, in other words.  Perhaps that’s the main reason that this fourth Olsen outing, unlike the first three, didn’t feature Kirby’s name anywhere on the cover; after five months, DC may have figured they no longer needed to tell us readers that Kirby Was Here — by now, we must know that, surely.

Not that the cover’s art made Kirby’s presence obvious, of course, as it was by Neal Adams.*  And despite the addition of “The New” in front of Jimmy’s name in the title logo, readers who hadn’t been keeping up with Mr. Olsen lately might not realize that anything had changed very much — after all, it’s not like bizarre transformations of the book’s title character were what you’d call unknown, or even rare, in the series’ pre-Kirby era.  That said, however, the cover does provide a fairly accurate depiction of what readers will find inside the comic — although, as anyone coming in cold with JO #136 will discover in the first few pages, the green giant appearing thereon isn’t really our boy Jimbo at all, but rather a a giant, green, super-strong, Kryptonite-enhanced clone of same. 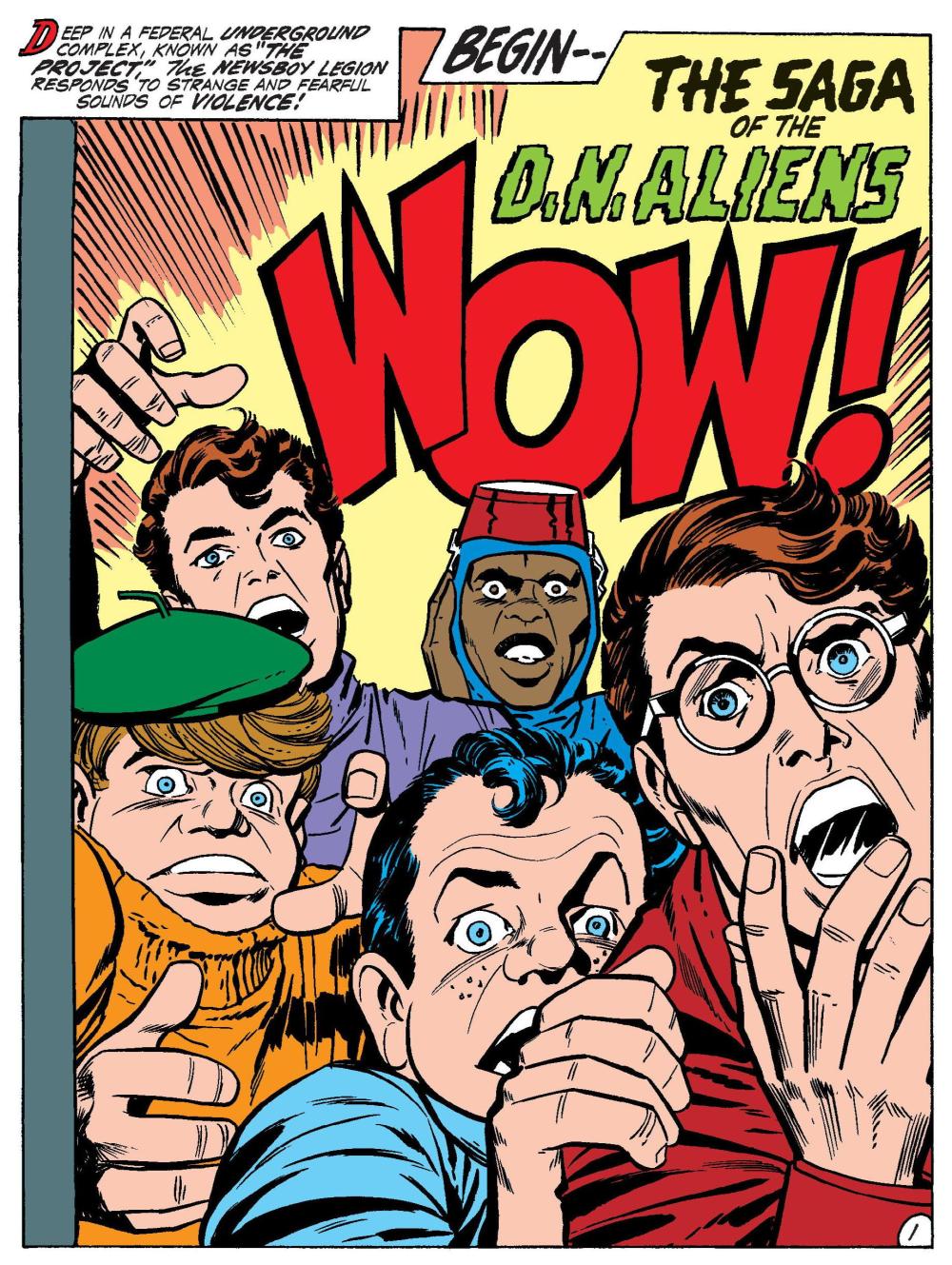 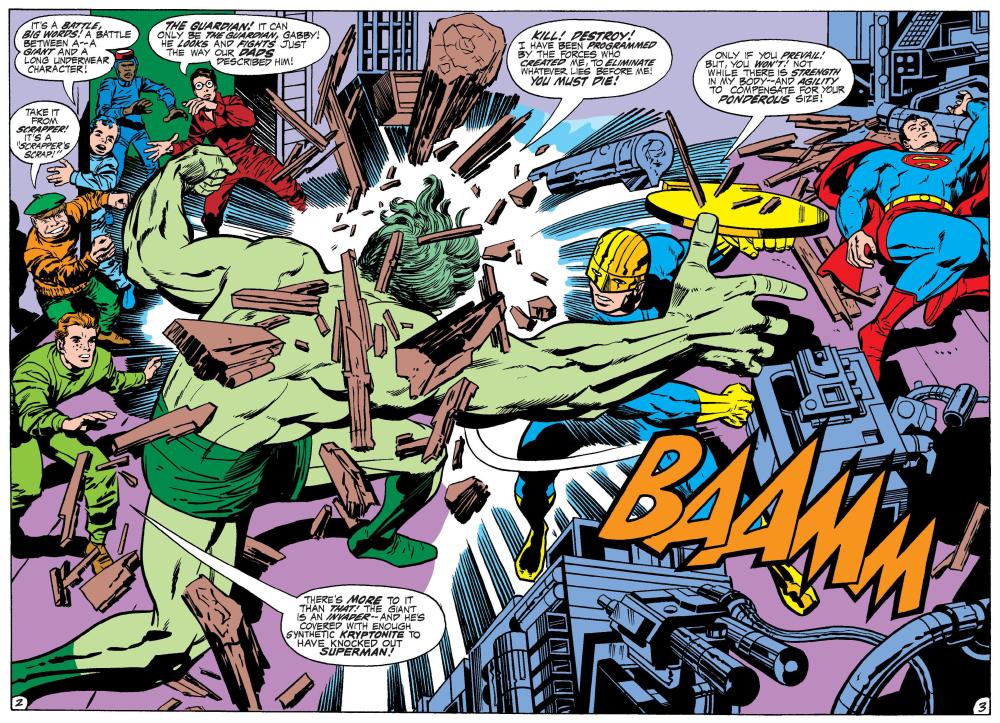 The story’s sole creator credit, given at the bottom of page 4, leaves out a couple of people.  One of those — inker Vince Coletta — was almost certainly skipped over by mistake.  The other — artist Murphy Anderson, who redrew Kirby’s Jimmy Olsen and Superman faces at DC’s direction — was just about as certainly intended to remain anonymous, even as his predecessor on previous issues of Kirby’s Olsen (as well as on Forever People #1), Al Plastino, had been.

Over the next couple of pages, the newly-emerged clone of the Golden Age superhero called the Guardian battles valiantly against the giant Jimmy-clone, while the original Jimmy and his new pals in the Newsboy Legion can only stand by and watch — and fruitlessly speculate on who made this creature, as well as where he could have come from.

Then, a “sneak punch” from the giant suddenly levels the Guardian, spurring Jimmy to sprint to the still-stunned Superman’s side to try to revive him: 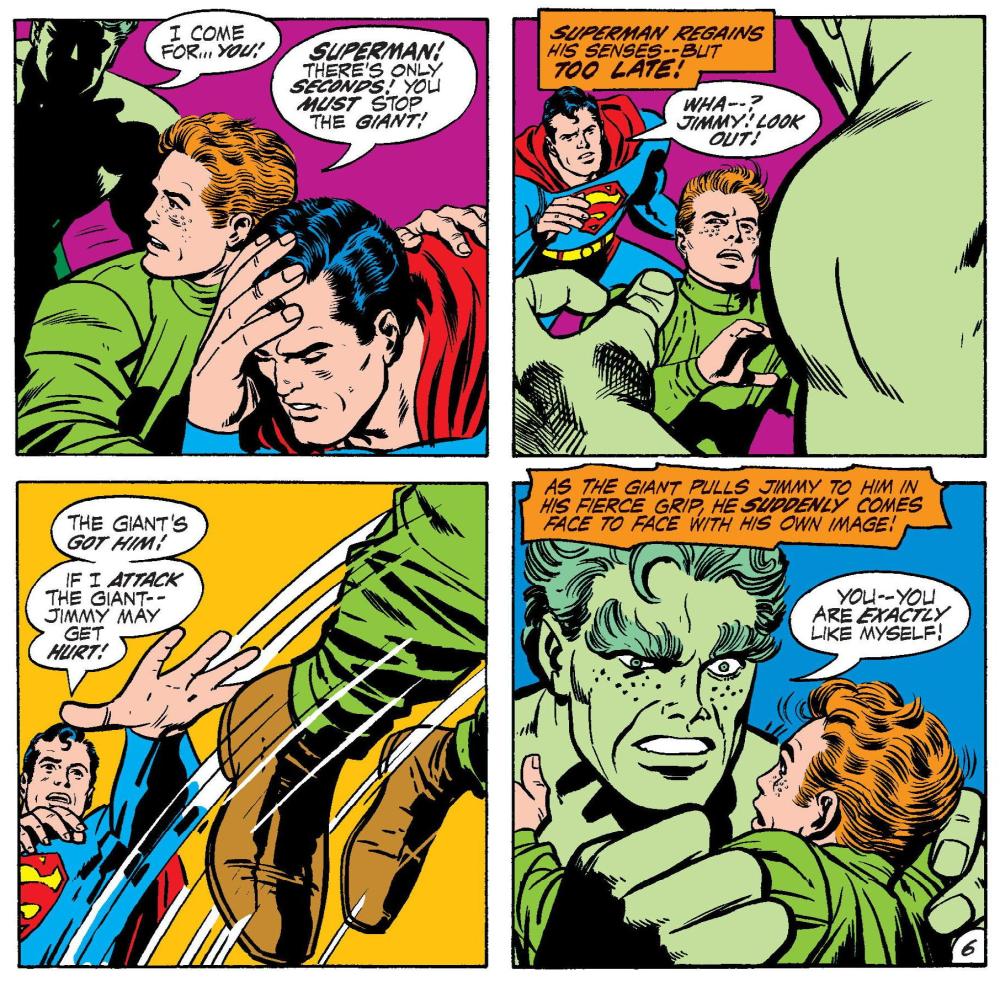 The Guardian, having quickly recovered, now leaps once more to the attack; this move distracts the giant long enough for the Man of Steel to do a Hulk-like stomp, shattering the cement floor and temporarily burying their foe… 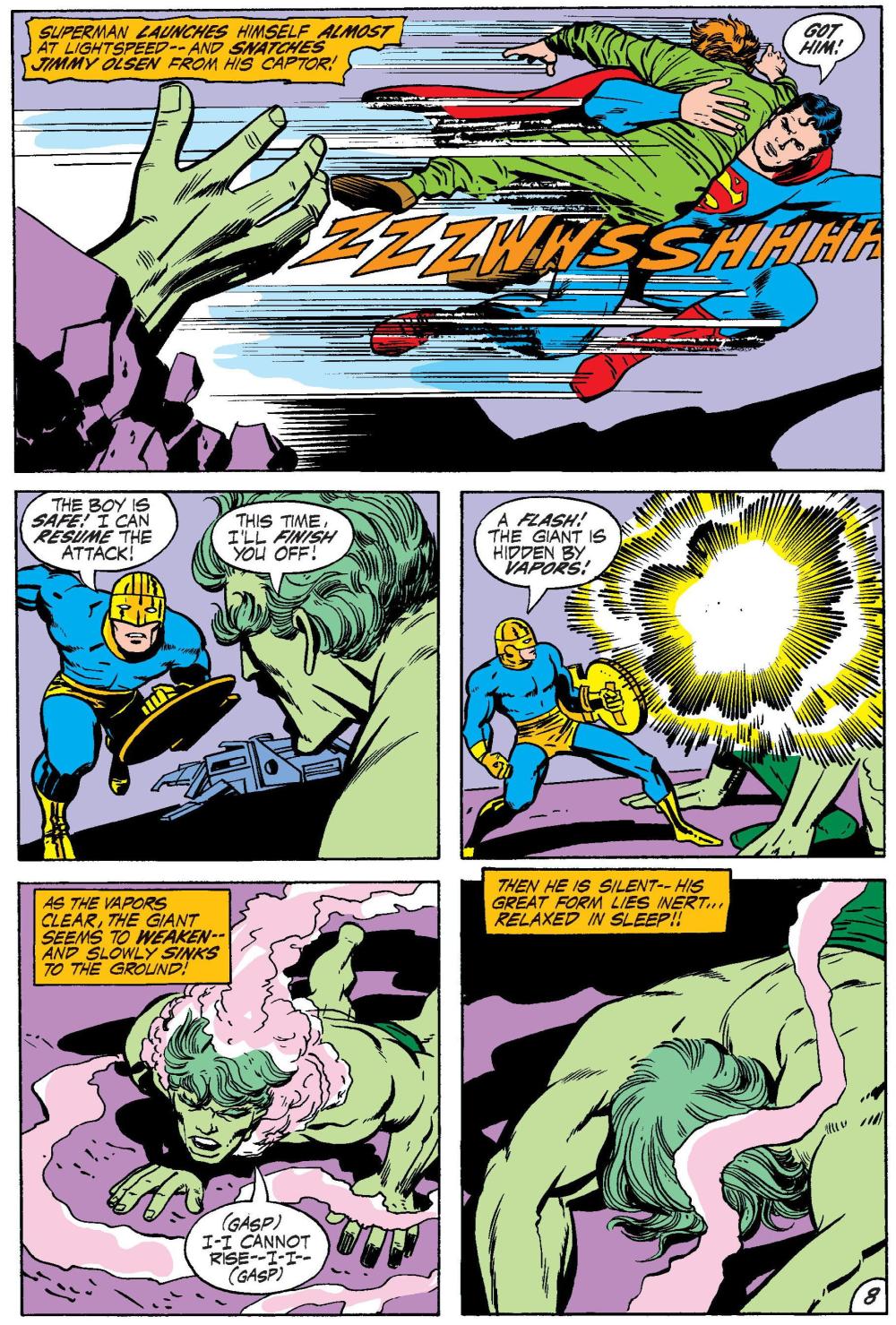 These “micro-paratroopers” — all of whom look exactly like the Newsboy Legion’s Scrapper — quickly take charge of the unconscious giant, dousing him with liquid nitrogen until he’s been completely encased in “an icy coat as strong as steel!”

We readers have now reached the halfway point of the issue (or close to it), and though we don’t know it yet, we’ve already had our full quota of action for this installment of Kirby’s storyline.  And that makes sense, actually — because not only has the action been practically non-stop since the opening pages of JO #133, but so has the barrage of new concepts birthed from the creator’s prodigious imagination — the Wild Area, Intergang, the Outsiders, the Hairies, Darkseid, the Project, the Evil Factory, and on and on.  It’s a good time to slow down for just a bit — at least for long enough to unpack everything we’ve had thrown at us over the last three and a half issues, as both we and our surrogates within the story itself — i.e., Jimmy and the Newsboys — try to get a handle on how it all fits together, and what it all means.

Of course, we readers have an advantage Jimmy and company don’t, in that we’re able to check in directly with the insidious menace which for now remains a completely opaque mystery to them — the Evil Factor’s Simyan and Mokkari, and their master, Darkseid:

This is Darkseid’s third appearance in Jimmy Olsen, and the dialogue in this scene provides a fuller account than we’ve had before both of his long-term goals and the strategies he’s presently employing to achieve them.  But, of course, if we’ve also been keeping up with Kirby’s other Fourth World titles, we have an even more complete picture of Darkseid and his machinations — for we’ll have learned by way of the first issues of Forever People and New Gods that Darkseid and his servants have come to Earth from the world of Apokolips in quest of the Anti-Life Equation — an “ultimate weapon” which somehow secretly resides within a living human mind, somewhere on our planet. 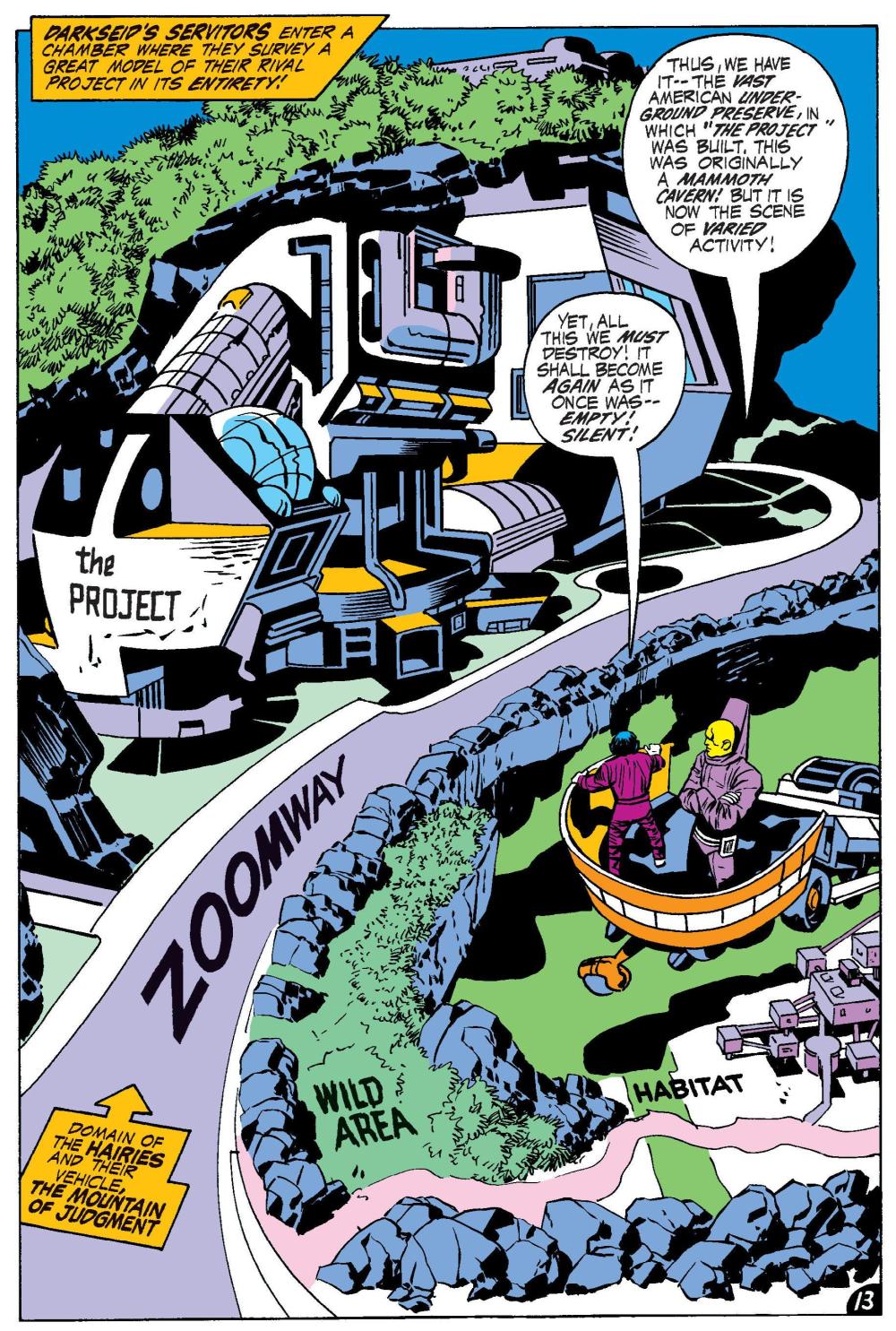 Page 13’s cutaway model of the Project and its environs is something of a godsend for those of us who’ve been trying to figure out just where all these fabulous places are in relation to each other, and on what scale.

But even though we’re mostly in exposition mode here, Kirby still takes time to move his story forward, as we’ll see on the next page:

Are the beings gestating within “these egg-sacs” destined to cause trouble for Jimmy Olsen and his friends?  Do you have to ask?

Meanwhile, back at the Project, the members of the Newsboy Legion are thrilled to meet the Guardian, who’s the spitting image of the hero their fathers — the original Legion — shared adventures with in the 1940s.  Then, as Tommy’s dad (a physician) takes the Guardian off for a quick medical exam, the other grownups give their sons the lowdown:

The fact that the one person of color in the “new” Newsboy Legion doesn’t have a precursor in the original group occasionally makes for awkward moments in Kirby’s Jimmy Olsen, and the panel above of Flippa Dippa and his father standing alone, obvious outsiders in this scene, provides a prime example.  One can admire Kirby’s impulse towards diversifying the Newsboys while still wishing that, once having determined to bring the earlier generation into his narrative, he’d given a little more thought to fleshing out the senior “Mr. Dippa”. Has he known the other Legion fathers for very long?  Does he have an official role at the Project, as they seem to?  We’re never told, one way or the other.

While the Newsboy Legions old and new hold their impromptu father-son conference, Superman gives Jimmy a tour of the Project.  Along the way, Supes explains to his young pal that he’s been a part of the whole enterprise since its inception: “My cell tissues were the first grown when the genetic code was broken and deciphered!”

That Superman has been subjected to cloning by the Project isn’t exactly news — we first learned about it last issue, and even got a look then at some tiny Super-clones that had been grown by Simyan and Mokkari in their Evil Factory, presumably from stolen tissue samples.  But the tantalizing questions raised then by this basic information still remain, e.g.: How the heck to you get tissue samples from an invulnerable Man of Steel in the first place?  And do Superman’s clones share his powers?  Maybe Jimmy would be willing to ask his friend about this stuff for us — but, alas, Superman doesn’t give him the chance…

Living human children, created in a lab, then raised in an institutional environment so that one day they can serve a secretive, off-the-books government facility as its homegrown “personnel”, apparently forever.  From a contemporary perspective, it’s a nightmare scenario — but in 1971, I (and apparently a lot of other readers) accepted it as being just fine.  Perhaps that’s partly due to a relative dearth of cloning stories in mainstream American comics at the time; but it probably has at least as much to do with the moral authority of Man of Steel in the DC Universe.  If Superman says the Project is on the side of the angels, then that must surely be the case.  Right?

If Kirby’s seemingly Utopian view of the wonders of genetic manipulation has a focal point, it resides with the “Step-ups”, aka the Hairies.  As the creator had elucidated in his essay published in the previous issue, “THE HAIRIES — Super-Race — or Man’s Second Chance”, he’d found a source of “strange hope” in this new and improved breed of human beings, whose “minds are fresh and new, clean slates unmarked by rigid, hardening, conflicting indoctrinations… they fear nothing, hate nothing, worship nothing but their own compatibility with the rest of Creation…  They wing it with a zest to live and learn and make existence an art form instead of a mad, grim march toward death.”  How can one possibly respond to such a vision, save as our boy Jimmy does? “Wow!”  But for such a vision to come to fruition, one must begin, as Jimmy notes, “with reading a little DNA molecule!” 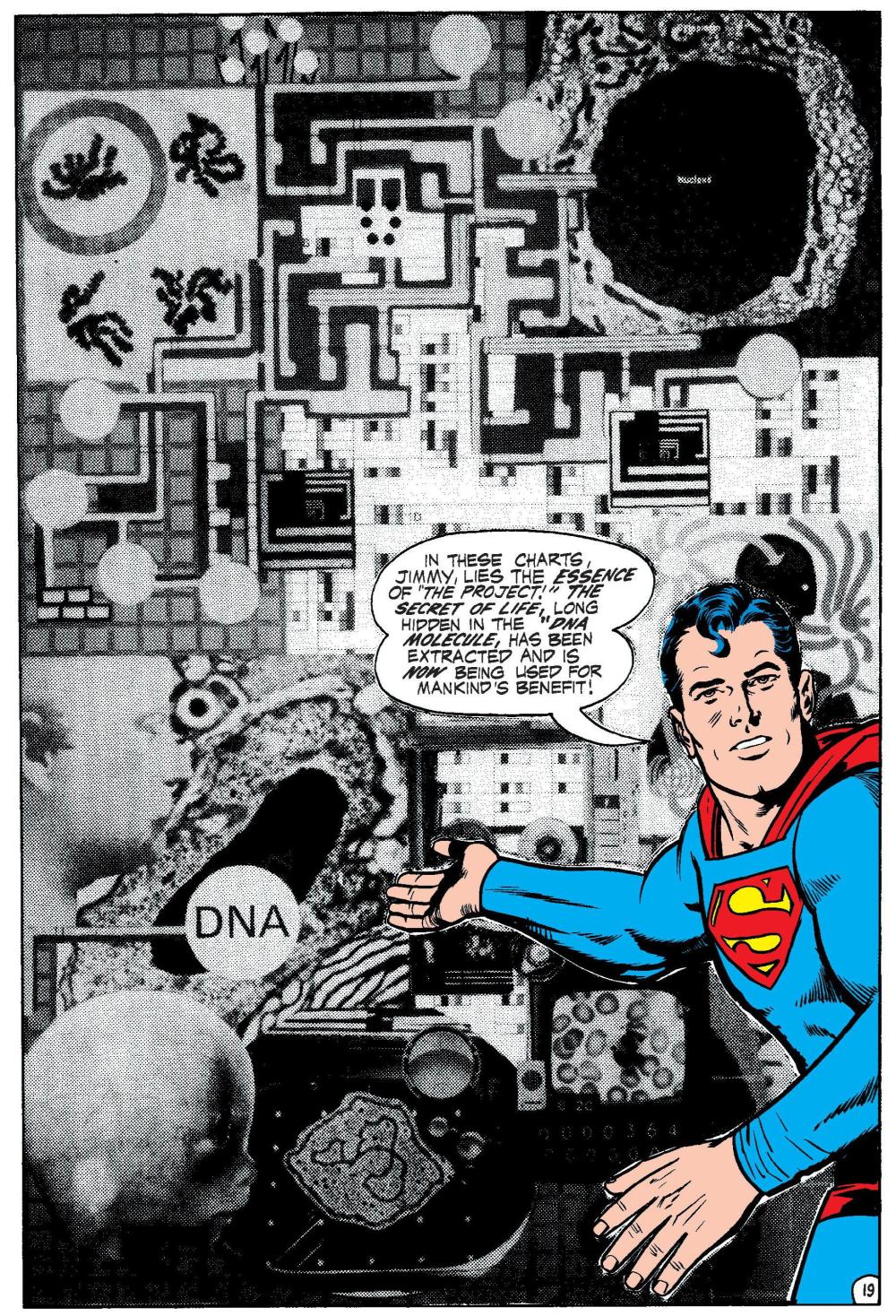 As I’ve mentioned in previous posts, the redrawing of the faces (and sometimes figures) of Superman and Jimmy in the three previous issues of Jimmy Olsen — mostly done by Al Plastino — went completely unnoticed by your humble blogger at the time.  But that all changed with this story, as Murphy Anderson took over the job.  And while I’m sure I must have copped to the visual dissonance prior to this point in the story, it’s page 19’s full-page splash panel — possibly because with its photo collage, it’s such a very Jack Kirby illustration — that stands out in my memory as having cemented for me the wrongness of what I was seeing.  What in the world was a Murphy Anderson head doing on top of a Jack Kirby body?

I might have been completely on board the Project train already, but if any other reader was having any ethical misgivings at this point, they may well have had them allayed by the advent of the operation’s resident “DNAlien”, Dubbilex.  I mean, this guy is such an obviously cool Kirby Kreation that he makes the case for the Project being a worthwhile endeavor, all by himself:

“Do you realize what weird, and perhaps dangerous, channels are being probed here?”  Here we have the first suggestion (outside of the scenes featuring the Project’s dark twin, the Evil Factory, of course) that Kirby is at least aware of the ethical ambiguities inherent in the kind of aggressive genetic manipulation he’s speculating about here.  But Superman sidesteps Jimmy’s pointed question, choosing to focus instead on their “hidden enemy!”  Speaking of whom… 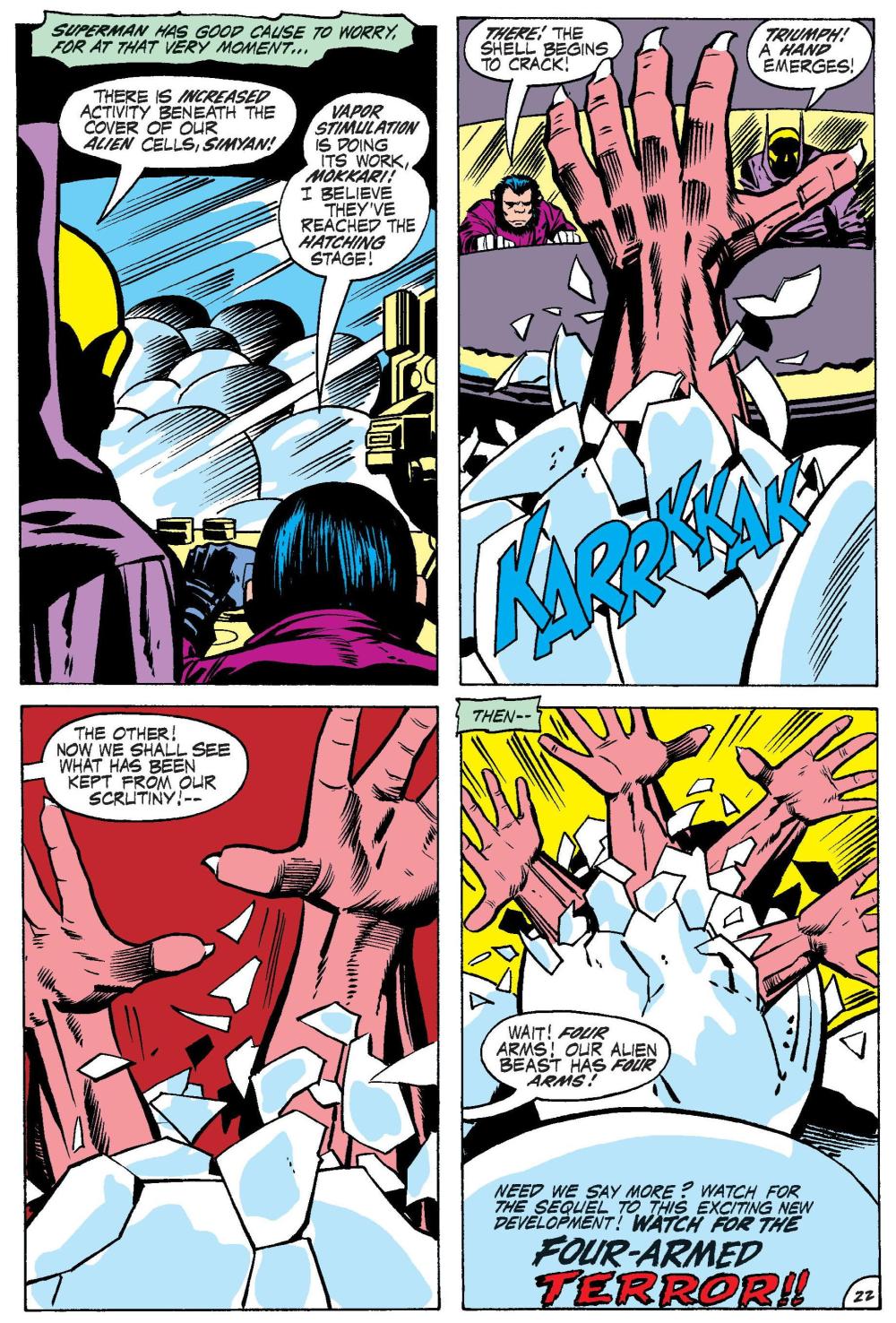 Four arms, huh?  Gee, you think it’ll have four legs, as well?  Or hey, maybe it’ll have no legs at all.  Wouldn’t that be weird!

For the answers to those and other such questions, we fans back in January, 1971 had to wait a month, and thus, faithful reader, I must ask you, too, to wait.  (Unless you have your own copy of Jimmy Olsen #137 to enjoy, in which case, go to town.)  But, you’ll be happy to know (or so I hope, anyway), you won’t have to wait nearly that long for another installment of “Attack of the 50 Year Old Comic Books”.  There’ll be another one coming along in just seven days.

*Mostly by Neal Adams, anyway.  According to comments Adams himself made in 1997 to The Jack Kirby Collector (and which were published in the magazine’s 17th issue), DC Editorial Director Carmine Infantino laid the cover out, while the faces of the Newsboy Legion were “all that was left of Jack [Kirby]”, presumably referring to an earlier version of the illustration.  Also, the Grand Comics Database reports that Murphy Anderson claimed to have worked on the Green Giant Jimmy figure.  Hmm, I guess you could say this one took a village.