At the conclusion of our discussion of Thor #166 three months ago, we left the God of Thunder about to face the judgement of his omnipotent All-Father, Odin, for his crime in succumbing to the affliction of Warrior Madness.  Thor had been driven to this state of irrational, uncontrollable fury following the abduction of his lady, Sif, by the artificially-created superhuman called Him (later to be known as Adam Warlock).  As things turned out, Sif was safely rescued, and Him, though soundly thrashed by the scion of Asgard, escaped without mortal injury.  Nevertheless, at the issue’s end Thor was called home to the Golden Realm to face the music; what he didn’t yet know, but we readers did, is that Odin had already determined that his punishment would be to go on a cosmic quest to find the world-devouring Galactus, learn the secret of his origin, and end his threat forevermore.  END_OF_DOCUMENT_TOKEN_TO_BE_REPLACED

The Mighty Thor has been my favorite Marvel Comics character for the better part of the last half-century.  The subject of today’s post is as responsible for that fact as much as is any other single comic book — even though it’s not “really” a Thor comic. 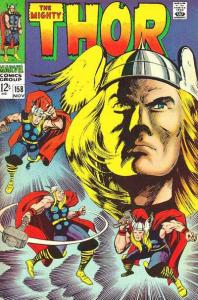 As I’ve recounted in previous posts, I first made the acquaintance of Marvel’s take on the Norse god of thunder in the summer of 1967, via Avengers #45 (which also happened to be my very first Marvel comic), in which he appeared in only the first few pages.  I didn’t encounter him again until almost a year later — this time in the pages of Avengers Annual #2, in which he played a somewhat more substantial role — but I didn’t get around to buying an issue of Thor itself until September, when the cover of #158 caught my eye.  That turned out to be a pretty good first issue to purchase, since it reprinted in full Thor’s origin story from Journey into Mystery #83, and its new-material framing sequence by Stan Lee and Jack Kirby also introduced me to a number of the settings and characters that had been brought into the series post-origin, such as Asgard, Odin, the Lady Sif, and so forth.  I enjoyed that comic book quite a bit, but for whatever reason, I didn’t pick up another issue of Thor for several months.  END_OF_DOCUMENT_TOKEN_TO_BE_REPLACED

By the time September, 1968 rolled around, I’d been interested in Thor for a while.  I’d been intrigued by the couple of appearances he’d made in in Avengers issues I’d bought, and I was fascinated by the idea that this Marvel Comics superhero was apparently the same guy as the Thunder God from the Norse myths I’d 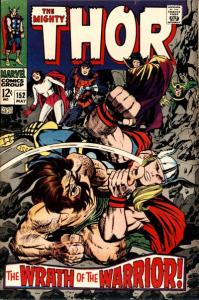 studied in school (even if the Marvel version was blonde and clean-shaven, rather than red-haired and bearded, like in the myths).  I have a distinct memory of gazing at a copy of Thor #152 sitting in the spinner rack at the Short-Stop, and wondering not only who the big ugly bruiser Thor was fighting with was, but all those other strangely garbed characters in the background, as well.  But in February of ’68, when that book came out , I was still feeling my way as a new Marvel reader, and wasn’t quite ready to take the plunge.  I was feeling a lot more comfortable with Marvel by September, though.  And, in fact, I might have sampled Thor even earlier, if I hadn’t been able to tell from the Mighty Marvel Checklist’s monthly issue descriptions that the series was then in the midst of an ongoing storyline, featuring the Mangog, that lasted through the summer.  END_OF_DOCUMENT_TOKEN_TO_BE_REPLACED