While I can’t claim to have distinct memories of the moment my fourteen-year-old self first laid eyes on the cover of Thor #195, one half-century ago, I feel confident in telling you that I was pretty happy about it (new Marvel Comics “picture frame” cover design notwithstanding).  That’s in part because penciller John Buscema and inker Frank Giacoia provided a well-crafted illustration, obviously; but for me, it had more to do with the subject of the illustration.  The God of Thunder and his best buds, the Warriors Three (who just so happened to be my favorite members of Thor‘s supporting cast, but hardly ever seemed to make the cover)  battling a bunch of trolls?  That seemed to put us right square in the middle of the high fantasy territory that often, but not always, supplied the milieu for the Son of Odin’s adventures, both in his current run and in the old Stan Lee-Jack Kirby Journey into Mystery stories I was then enjoying in reprint form via Special Marvel Edition.  More to the point, that particular territory was my favorite milieu for Thor stories, as it had been since I’d caught the high fantasy bug by way of J.R.R. Tolkien’s Lord of the Rings in the summer of 1970 — and the main reason why Thor had become my favorite Marvel superhero in the months since then.  END_OF_DOCUMENT_TOKEN_TO_BE_REPLACED

While any specific memory of the occasion has been lost to time after half a century, I feel pretty sure I was at least mildly startled when I dropped in at my neighborhood Tote-Sum in the first week of August, 1971, and discovered that all the new Marvel comics — including the latest issues of three series I was buying regularly, Daredevil, Iron Man, and Thor — were now 25 cents (up from 15), and 48 pages, not counting covers (up from 32).

I wasn’t completely surprised, of course.  After all, DC Comics had raised their prices and page counts by the exact same amounts two months earlier, and it only made sense that Marvel would eventually follow suit.  (The only other comics industry price hike I’d experienced personally — the move from 12 cents to 15 cents back in 1969 — had been effected by both DC and Marvel more or less simultaneously.)  What was more, several Marvel titles, such as Conan the Barbarian, had already made the jump to the new format/price point back in July — a move that Marvel had at least hinted could be a harbinger of things to come via a comment on that month’s Bullpen Bulletins page.  (“As for what the future holds in store for the rest of our magniloquent mags — well, keep lookin’ forward, pilgrim, ’cause that’s where the future’s coming from!”)  But a hint’s not the same thing as a promise, and just because one expects something to happen eventually, doesn’t mean one won’t still be surprised when said thing happens right now.  So, I’d say that at least some mild startlement was in order for my fourteen-year-old self, as well as for most of my comics-buying peers.  END_OF_DOCUMENT_TOKEN_TO_BE_REPLACED

Back in November of last year, we took a look at Thor #184 — the premiere installment in the first multi-issue, large scale epic that editor-scripter Stan Lee had attempted in the title since losing his longtime collaborator Jack Kirby to DC Comics.  Hyping the comic in the Nov., 1970 Bullpen Bulletins, Marvel went so far as to compare it to the debut of the Inhumans in Lee and Kirby’s Fantastic Four, some five years previously.  And upon my thirteen-year-old self’s actually reading it, it really did feel like Lee and his collaborators, penciller John Buscema and inker Joe Sinnott, had pulled out all the stops for this one.

This opening chapter of what would prove to be a five-issue story arc introduced us readers — as well as the mighty Thor, himself — to the menace of the World Beyond: a mysterious realm somewhere out past the farthest reaches of space, which was, somehow, devouring our universe from the edges in.  Associated with this menace was a word — perhaps a name — of unknown significance: “Infinity”.  We and Thor also met an intriguing new character, appropriately dubbed the Silent One, who had recently shown up in Asgard unannounced; All-Father Odin had since decided to let him hang around, sensing that he was in some way the key to the mystery.   END_OF_DOCUMENT_TOKEN_TO_BE_REPLACED 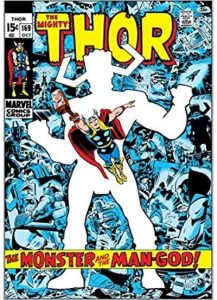 When my thirteen-year-old self picked up Thor #184 in November, 1970, I hadn’t read a single issue of the title in over a year.  The last issue I’d bought, Thor #169, had featured the conclusion of Stan Lee and Kirby’s long-running (and, apparently, extensively reworked) Galactus storyline; it also led directly into Thor’s confrontation with the Thermal Man, the culmination of a subplot that had woven through the last couple of issues.  Apparently, I wasn’t interested enough in seeing the God of Thunder and yet another of Kirby’s super-powerful but personality-free robots (of whom the King gave us a few too many in the late ’60s) whomp on each other for twenty pages, and so I passed on #170.  Then, a month later, I opted to pass on #171 as well; and then on #172, and then #173…  END_OF_DOCUMENT_TOKEN_TO_BE_REPLACED

At the conclusion of our discussion of Thor #166 three months ago, we left the God of Thunder about to face the judgement of his omnipotent All-Father, Odin, for his crime in succumbing to the affliction of Warrior Madness.  Thor had been driven to this state of irrational, uncontrollable fury following the abduction of his lady, Sif, by the artificially-created superhuman called Him (later to be known as Adam Warlock).  As things turned out, Sif was safely rescued, and Him, though soundly thrashed by the scion of Asgard, escaped without mortal injury.  Nevertheless, at the issue’s end Thor was called home to the Golden Realm to face the music; what he didn’t yet know, but we readers did, is that Odin had already determined that his punishment would be to go on a cosmic quest to find the world-devouring Galactus, learn the secret of his origin, and end his threat forevermore.  END_OF_DOCUMENT_TOKEN_TO_BE_REPLACED

The subject of today’s post was the second issue of Thor that I ever bought, and that’s probably not entirely by happenstance.  Purchased three months after my first foray into the Son of Odin’s solo adventures, #161 was the first issue to come out after Silver Surfer #4 — and as readers of my most recent post know, that particular comic book — an Asgardian extravaganza which featured the titular hero in battle against the Thunder God — did at least as much as Thor #158 had to foster my growing interest in the immortal Avenger and his comic book series.

Although the mythological aspects of Thor held rather more appeal for me than either the hero’s battles against Earthbound super-villains or his outer space adventures (not that I ever disliked any of that stuff, mind you), I don’t think I was fazed by the obviously science-fictional orientation of issue #161’s cover.  In fact, I was probably interested in seeing the world-devouring Galactus in a new story, having only read about him thus far in Silver Surfer #1, where he’d appeared only in flashback.  On the other hand, I didn’t know anything at all about Ego, the Living Planet, but I suspect my eleven-year-old self thought he looked pretty interesting on that striking Jack Kirby – Vince Colletta cover.  Of course, neither of those cosmic titans were actually named on the cover, and I might not have recognized Galactus just from his profile; but since I’d read the issue descriptions in both this and the last month’s Marvel Bullpen Bulletins, I knew who Thor was going to be meeting, and presumably fighting, here.  END_OF_DOCUMENT_TOKEN_TO_BE_REPLACED

The Mighty Thor has been my favorite Marvel Comics character for the better part of the last half-century.  The subject of today’s post is as responsible for that fact as much as is any other single comic book — even though it’s not “really” a Thor comic.

As I’ve recounted in previous posts, I first made the acquaintance of Marvel’s take on the Norse god of thunder in the summer of 1967, via Avengers #45 (which also happened to be my very first Marvel comic), in which he appeared in only the first few pages.  I didn’t encounter him again until almost a year later — this time in the pages of Avengers Annual #2, in which he played a somewhat more substantial role — but I didn’t get around to buying an issue of Thor itself until September, when the cover of #158 caught my eye.  That turned out to be a pretty good first issue to purchase, since it reprinted in full Thor’s origin story from Journey into Mystery #83, and its new-material framing sequence by Stan Lee and Jack Kirby also introduced me to a number of the settings and characters that had been brought into the series post-origin, such as Asgard, Odin, the Lady Sif, and so forth.  I enjoyed that comic book quite a bit, but for whatever reason, I didn’t pick up another issue of Thor for several months.  END_OF_DOCUMENT_TOKEN_TO_BE_REPLACED

By the time September, 1968 rolled around, I’d been interested in Thor for a while.  I’d been intrigued by the couple of appearances he’d made in in Avengers issues I’d bought, and I was fascinated by the idea that this Marvel Comics superhero was apparently the same guy as the Thunder God from the Norse myths I’d

studied in school (even if the Marvel version was blonde and clean-shaven, rather than red-haired and bearded, like in the myths).  I have a distinct memory of gazing at a copy of Thor #152 sitting in the spinner rack at the Short-Stop, and wondering not only who the big ugly bruiser Thor was fighting with was, but all those other strangely garbed characters in the background, as well.  But in February of ’68, when that book came out , I was still feeling my way as a new Marvel reader, and wasn’t quite ready to take the plunge.  I was feeling a lot more comfortable with Marvel by September, though.  And, in fact, I might have sampled Thor even earlier, if I hadn’t been able to tell from the Mighty Marvel Checklist’s monthly issue descriptions that the series was then in the midst of an ongoing storyline, featuring the Mangog, that lasted through the summer.  END_OF_DOCUMENT_TOKEN_TO_BE_REPLACED